What geophysical events can (temporarily) increase the Earth's rate of rotation?

My understanding is that the dominant factor behind the slowing of the Earth's rotation (i.e. the lengthening of the day) is tidal friction induced by the Moon's gravity. As seen on the graph below, the general trend is towards slower rotation of the Earth. 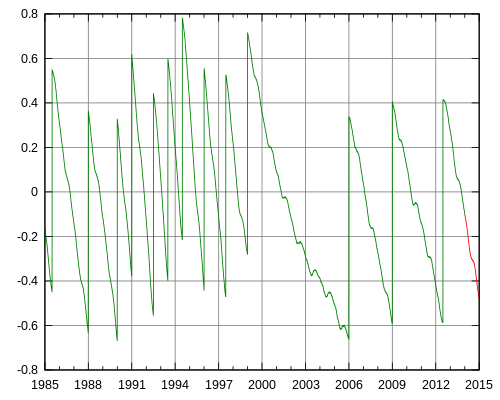 Plot showing the difference UT1−UTC in seconds. Vertical segments correspond to leap seconds. Red part of graph was prediction (future values) at the time the file was made.

However! There are a few cases where the rotation of the Earth appears to have become faster, most noticeably in the 2003-04 and 2004-05 segments. What is the underlying cause of these and other temporary increases in the Earth's rate of rotation? (I'm asking this in a general sense, though I would also be interested to know what events any of the specific upswings on the graph correspond to.)

geophysics earth-rotation
Share
Improve this question
asked May 25 '14 at 0:06

The Earth's rotational angular momentum is indeed being transferred to the Moon's orbit. However, this is a very slow process that is barely noticeable even over the course of hundreds of years. That long-term trend is invisible in the short thirty year span shown in the graph in the question. The variations seen in the plot result from transfer of angular momentum amongst components of the Earth (solid Earth, the atmosphere, the oceans, and the outer and inner core) and from changes in the Earth's inertia tensor.

About the Graph in the Question

Regarding that graph, what you are seeing are

Regarding the first item, our 86,400 seconds per day is based on the length of day in about 1821. The CGS second was defined in the late 1800s based on data collected over a ~100 year period, centered around 1821. The SI second is now based on atomic clocks, but the definition was intentionally made consistent with that old CGS second. The length of day has increased by about 2 milliseconds since the early 1800s.

Suppose the Earth's rotation rate held steady at one mean solar day per 86,400.002 seconds, the average rotation rate over the last several decades. We would still need to add a leap second every 500 days or so because of that 2 milliseconds increase in the length of day. That's the primary feature you are seeing in the plot shown in the question.

Regarding the second item, the variations during the 30 year span in that plot don't have much to do with the variation over the 200 year span since the early 1800s, and those in turn don't have much to do with the very, very long term variations in length of day due to transfer of angular momentum to the Moon. That very, very long term trend becomes obvious only over the course of many tens of thousands of years or more. Over the short term (a hundred years is "short term" in this sense), various cyclical effects dominate over this very long term trend. The transfer of angular momentum to the Moon is completely hidden in the 30 year span covered in the plot shown in the question. That's just too short a time span to see that transfer of angular momentum.

Short-term Variations in Length of Day

Those leap second adjustments make it a bit hard to see what's going on. Here's a much better portrayal:

The Earth comprises five different rotating systems: The inner core, the outer core, the mantle and crust, the oceans, and the atmosphere. Our terrestrial timescales, UT1 and UTC, are based on the rotation of the mantle and crust only. These five systems do not quite rotate in unison. For example, the inner core is currently rotating slightly faster than one revolution per day while the outer core is rotating slightly slower than one revolution per day. These systems transfer angular momentum amongst themselves.

Some of this transfer is visible in the "Seasonal Variations" plot in the above graph. The mantle and crust transfer angular momentum to and from the oceans and atmosphere on a seasonal basis. What's left after removing those season variations and other high frequency variations (shown as "Irregular Variations" in the above graph) is the white "Trend" line overlaid on top of the blue plot. This white curve shows multi-year variations in the length of day.

The trend over hundreds of millennia a very gradual increase in length of day due to transfer of angular momentum from the Earth's rotation to the Moon's orbit about the Earth, currently about 2.3 milliseconds per day per century. That's not visible in the plot shown in the question. Over the past several millennia, post-glacial rebound has exchanged less dense ice/water in the polar regions with more dense rock. This reduced the Earth's moment of inertia and thus increased the Earth's rotation rate. Over decades, variations in length of day largely due to interactions between the core and mantle. The inter-annual variations are due to transfers of angular momentum amongst the core, mantle, oceans, and atmosphere. The El Niño–Southern Oscillation and changes in the gravitational field are key drivers in these inter-annual variations.

Large earthquakes have also been shown to change the rate of the Earth's rotation. E.g. The 2011 earthquake off the coast of Japan.

Not the answer you're looking for? Browse other questions tagged geophysics earth-rotation or ask your own question.

14
How are Earth's rotational changes due to large earthquakes calculated?

9
Is it known what determines the rate with which plate tectonics occur?
16
Can impact events cause widespread volcanic activity on the other side of the planet?
12
What geophysical knowledge have we learned by the construction of IceCube?
9
What is the current status of geophysical global cooling theory?
8
Was the filling of the Three Gorges Dam's impact on the Earth's rotation rate detectable?
4
What (if anything) can be learned from accurately recording tilt motion during seismic events?
4
What effect does climate change have on the Earth's rotation?