Guidelines for locations of NTU markings on a turbidity tube

One way to estimate the turbidity of water while in the field is to use a turbidity tube. So far I've found two sources where I can get an idea of the locations of NTU markings along the tube.

The PDF file The Turbidity Tube: Simple and Accurate Measurement of Turbidity in the Field - originally by Elizabeth Myre & Ryan Shaw at Michigan Tech is a nice introduction to the concept, outlines how to build a turbidity tube from simple materials and use it, and offers a table of numbers that comes with the following description:

(UW Extension, 2003). Several tables of slightly different conversions are currently in use. This table was chosen from among the alternatives because of the reliability of the source and because the values were more conservative than in other tables.

Select Scientific in Australia sells a professional two piece turbidity tube and one image (from here) includes a photo with a length scale so that marking locations can be estimated.

I've made a rough plot of both below, and they are significantly different. That's not too surprising, as there is difference in construction as well as difference in opinions and between sources.

Are there any further guidelines out there that I've missed? Any further advice before I make one and give it a try? Of course I'll include a centimeter scale so that it can be converted later, but sooner or later I'll need to settle down and choose a conversion.

note: I am most interested in the higher turbidity end of the scale, say above 50 NTU. This is not traditionally the turbidity tube's "best end", but it's where the two sources I've found diverge the most. 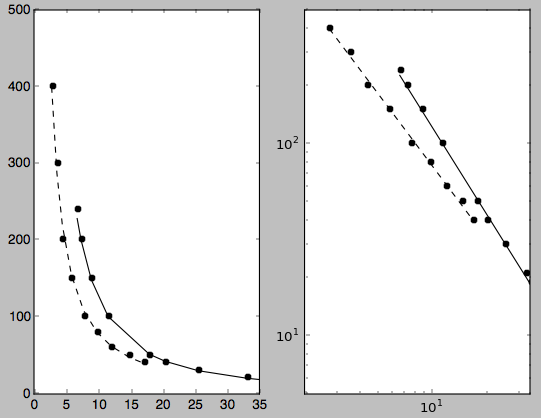 above: plot of some estimates for position of NTU markings on a turbidity tube as a function of distance from the bottom in centimeters. The solid line is tabulated data in the Michigan Tech PDF, the dashed line is estimated from the Select Scientific photo. Curves are from the equations below. Since they are power-law, they show as straight lines on the log-log plot on the right.

Browse other questions tagged turbidity field-measurements or ask your own question.