Is winter hotter at the Equator?

I live in the Northern Emisphere. One of the things I have been taught when I was in high school is that winter is colder than summer because in that season we're at an unfavorable angle and nights last longer than days, despite Earth being closer to the Sun during winter months.

Does this really mean that on the Equator, where day and night are of the same length all year long, winter is the hottest season*?

Does this also mean that Winters in the Southern hemisphere are colder than our Summers and their Winters are hotter than or Summers (or that they would be if not for the Gulf Stream, air currents and other temperature-changing effects)?

*I can think of a different reason that would make equinoxes hotter (more sunrays per surface area when the sun hits from above all day long) but I have no idea of which effect would be greater.

Does this really mean that on the Equator, where day and night are of the same length all year long, winter is the hottest season?

By "winter", I assume you mean December, January, and February. The answer is "No!"

Insolation varies on an annual basis outside of the tropics, one maximum and one minimum every year. This is not the case in tropical regions, where available insolation has two local maxima and two local minima every year. This effect is greatest at the equator. The graph below depicts available insolation at increments of 30 degrees latitude, from the equator to the north pole.

The slight variations in insolation at the equator are easily overcome by climate. Equatorial regions tend to have wet seasons and dry seasons. When these occur depends much more on wind patterns than it does on aphelion / perihelion.

Does this also mean that Winters in the Southern hemisphere are colder than our Summers and their Winters are hotter than or Summers?

The mean temperature on the equator for three locations (South America, Asia, Africa) show that while there is a small seasonal variation, the timing of the peak is not the same at every point. This is presumably because other atmospheric effects dominate the climate at the equator - not just the distance to the Sun: 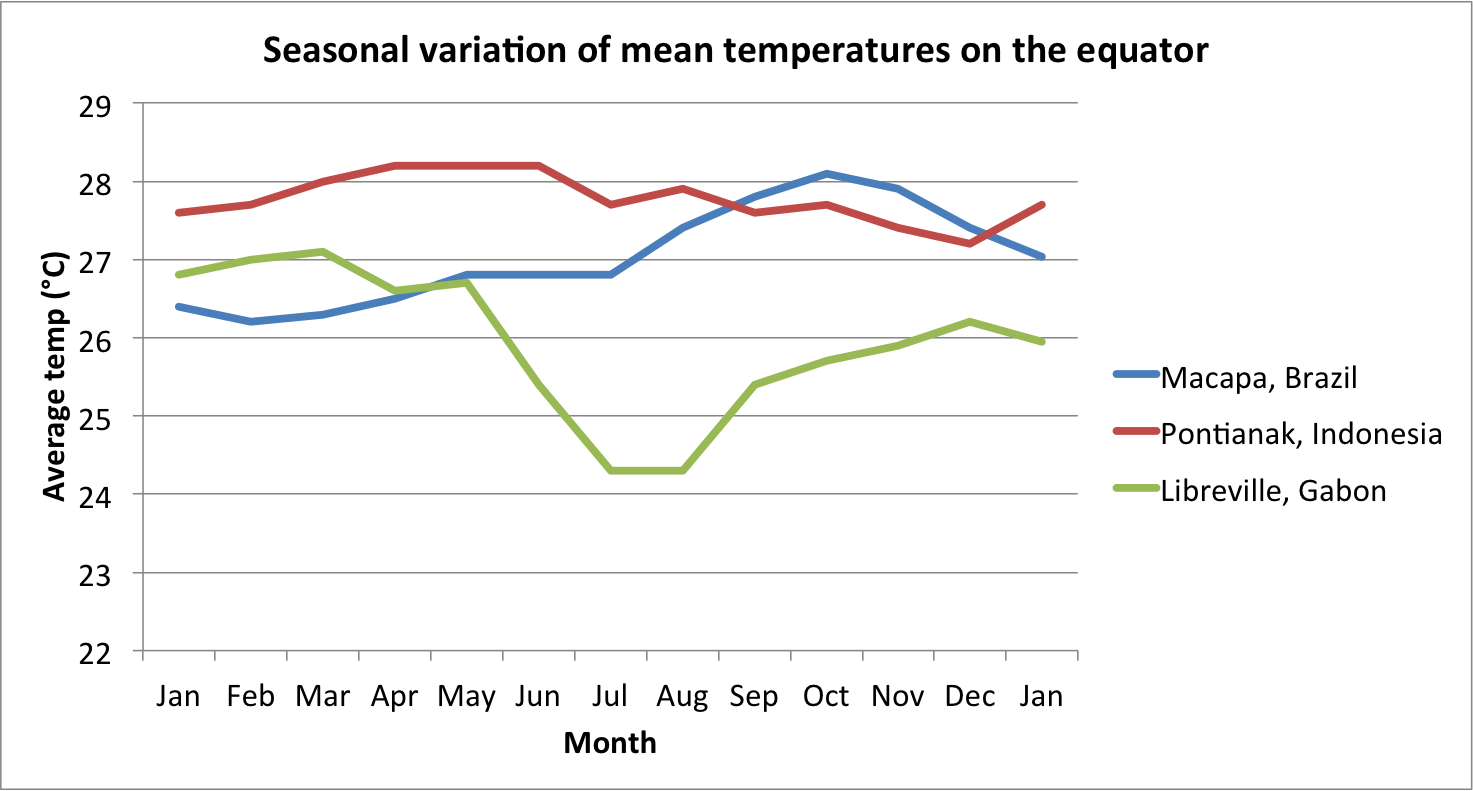 (Data extracted from Wikipedia article) If you wanted the effect of the solar irradiation alone - the distance from aphelion to perihelion varies from 0.9832899 AU to 1.0167103 AU (about a 3% variation). Since solar irradiance goes with the inverse square of the distance, you expect the solar intensity to change by 6%, with the "hottest" moment coming in early January.

A simplified black body model has the Earth's temperature responding according to the Stefan-Boltzmann law - which would make the temperature increase with the fourth root of the incident power, or 1.5%. For a mean surface temperature of 27°C at the equator (300K) that would be a 10K change...

But a "simple black body model" is not at all how Earth works - so we're back to "all the other effects" completely dominating the seasonal variations.

As a reference, you might want to consult this link which possibly contains more information that you would ever want...

Not the answer you're looking for? Browse other questions tagged temperature geophysics or ask your own question.

18
How do I explain why the Tibetan plateau is colder than lowlands at similar latitudes?
14
Are cloudy nights warmer than nights without clouds?
11
Why is the South Pole colder than the North Pole?
4
Global Gridded Daily Temperature (at 2m): difference between GEFS Reforcast and NCEP Reanalysis
11
What is the temperature of the flowing water in icy river?
10
Does the global temperature vary daily (hotter and colder days)?
2
Can a planet be heated by the green house effect to a temperature higher than that created by its incident and net absorbed, peak external radiation?
5
How is weather formation prevented in the stratosphere?