If a person is to stand at the epicenter of an earthquake. Is it true that he would not detect P-waves nor S-waves echoing off the mantle core boundary?

Since if P-wave that enter perpendicularly into the core is not refracted or reflected and S-waves are absorbed by the liquid outer core?

A person would not detect much else than the surface waves (Love and Rayleigh waves). The later body waves phases are of very low amplitude and are only detected by a sensitive seismometer. Also, at a short offset, it is often hard to pick later phases, even if they occur. There is a critical angle for seismic refraction, but not for reflection. 0-offset reflection originates just beneath the source.

The core-mantle boundary represent a large change in elastic properties, so some energy will bounce back to the surface. We call these phases PcP, ScP and ScS phases (Pressure-core-Pressure etc). The PcP is the reflected P-wave and ScS is the reflected S-wave. The ScP wave is an interesting phenomena, as it's formed as a part of the energy in the S-wave is converted into a P wave and reflected. There are also higher orders of seismic wave phases that can be detected (or modelled in synthetic seismograms) near the epicenter, the PcP2 and ScS2 e.g. (not shown in figure). The PKiKP is a reflection from the inner core. 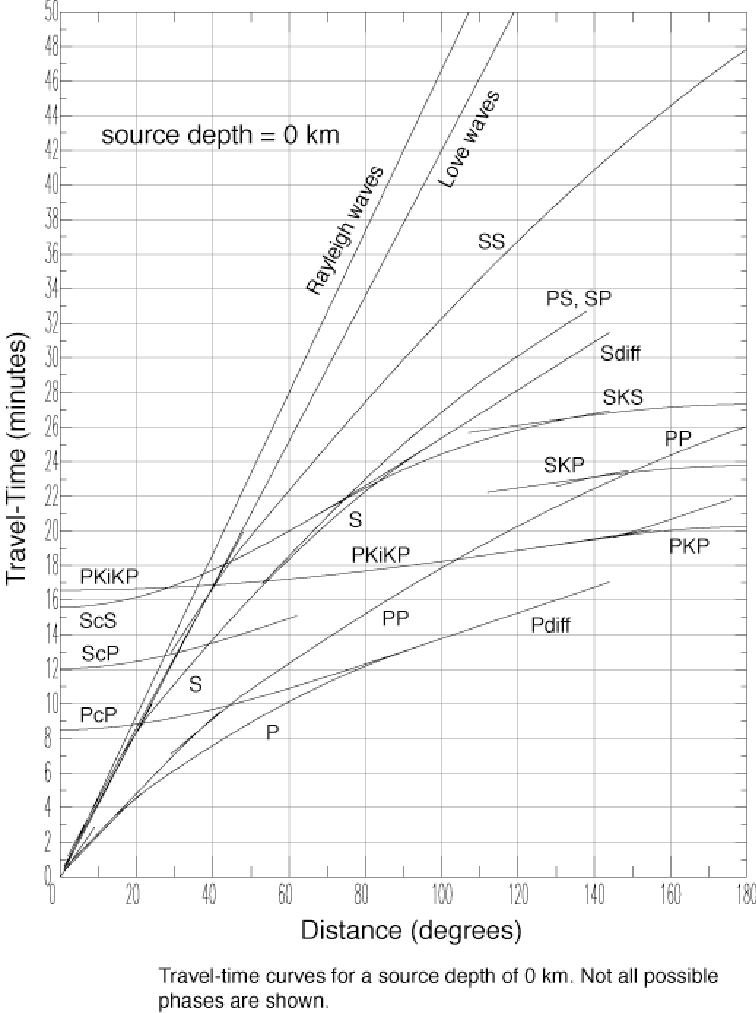 The travel time diagram gives a rather good idea of when to expect seismic phases at different distances from the earthquake. The distance is in degrees, so 180$^\circ$ is on the opposite side of the planet. Note how the core shields all direct shear waves, that is why we know that the outer core is fluid.

Not the answer you're looking for? Browse other questions tagged earthquakes seismology or ask your own question.

16
How much silicon is in the Earth's core, and how did it get there?
12
Why does seismic activity shed light on the inner core rigidity?
8
Distance to epicenter vs distance to focus
2
Travel Times for Seismic Wave Types - Why reflected t-x plot curves
5
Could an earthquake on flat land still kill someone without any buildings/boulders or such near by?
2
Could Rumblings From Plutons be as Ominous as Rumblings From Volcanoes?
1
How do we know the speed of S-waves (shear waves) in the Earth's inner core? Has this been measured?