Did climate cool down when underground hydrocarbons stocks formed?

As far as I understand, the dominant theory of modern climate change says that recent warming is mainly caused by the massive burning of hydrocarbons that used to be stored in solid form mostly underground as petroleum, coal, etc.

This suggests that the reverse process should contribute to a cooling of the climate (or to a slowed down warming if other processes are at play at the same time).

In particular, a cooling should have occurred throughout the period when the stocks of underground hydrocarbons were formed by the "pilling" of organic remains.

One thing you have to understand is that natural carbon sequestration via the formation of fossil fuel is VERY slow, it can take millions of years to build up the coal we burn in a day. In addition, one of the more dominant effects on the climate is solar radiance and continental position which changes over such long stretches of time, making matching such slow changes to carbon with climate change more difficult. Continent position also affects carbon sequestration and CO2 concentration directly making it even more confusing. Things like seaways and deserts can have huge effects on CO2.

The real problem is matching coal formation to changes in CO2 concentration. Most coal comes from the carboniferous and the Permian time periods (along with the evolution of land plants that make it), the carboniferous saw severe cooling and severe drops in CO2. How much of this is CO2 lost to coal versus how much is just the formation of forests and other terrestrial ecosystems combined with changes in contingent positions is still up for debate.

The Permian however saw severe warming near its end and a rapid rise in CO2 at the same time, but most of it was relatively stable and unchanging both in CO2 and temp. It also included one of the largest volcanic events in earth's history, and again changing tectonic position. So although the link between CO2 and temperature is really well established we can't even say for sure such slow coal formation actually reduces atmospheric CO2 concentrations. 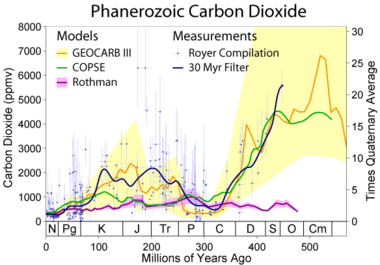 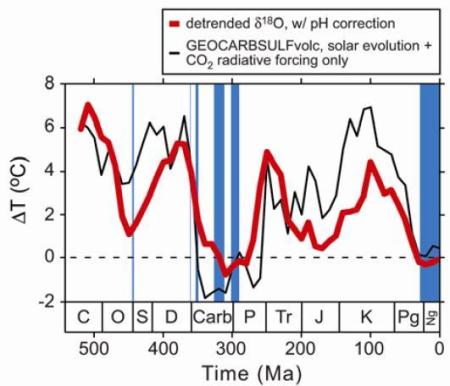 A lot of CO2 was also used in the creation of calcium carbonate (limestone) there was also heavy volcanic activity during this period this do lower the temperature at least in the short time during the eruption and a few years there after.

The last part of your question is basically can the CO2 level get too low.

The level of CO2 are regulated by plants if it falls, several things will happen,plants will grow slower the temperature on the earth will go down making plants grow even slower.

But this is highly unlikely to happen as long as the supply of CO2 is continued.

At the instant any atom of carbon is taken out of the atmosphere by a plant or animal and incorporated into its structure then that atom is "off the list" as it were with respect to having an effect in the atmosphere. Once in the animal/plant it may be there for eons until it becomes oil, coal,or whatever. So it is not the ultra slow conversion of organic matter to hydrocarbons that is relevant but the amount taken up by living matter on a daily basis which is sequestered into its structure.

Looking at the historical record we would therefore need to think about the amount of animal and plant activity on the planet and, to some extent, its type. This is quite difficult as we only have proxy records. however as we know that CO2 is effectively plant food it seems reasonable to assume that if the proxy record shows high levels of atmospheric CO2 we might expect that fairly quickly, a few year/decade timescale, that plant life on earth would respond quickly and become very lush indeed.

This is of course only one factor with respect to CO2. Past volcanic activity is likely to also be relevant.

Not the answer you're looking for? Browse other questions tagged climate-change climate paleoclimatology carbon-cycle or ask your own question.

10
What impact on climate did 2011 earthquake and tsunami have?
11
Did the Neolithic Revolution have an effect on the earth's climate?
1
Why is a future increase in solar luminosity by 10% supposed to have disastrous consequences for life on earth when the last 30% did not?
6
When sea level rises, does the increased ocean area cause the earth to cool down somewhat?
0
Doesn't increased human activity add to heating the atmosphere directly?