Ozone is formed in the upper atmosphere by ultraviolet light, and broken down by ultraviolet, spontaneous reactions and artificial pollutants among other things.

Suppose there were no artificial pollutants, and the sun was magically replaced with a giant heat lamp that put out no ultraviolet but kept the current temperature, how long would it take for the ozone to decay of its own accord or by reacting with natural pollutants?

Let's first consider the scenario in the absence of free radicals that can act as catalysts of $O_3$ destruction. In such scenario, added to the absence of UV radiation, the photolysis of ozone ($O_3 + UV → O_2 + O$) would not be possible. Therefore, the only way to destroy ozone would be by the reaction

But the lack of UV radiation would also stop the production of atomic oxygen by photolysis, therefore only the preexisting atomic oxygen would be available for that reaction. Then, for simplicity we can consider two extreme scenarios: 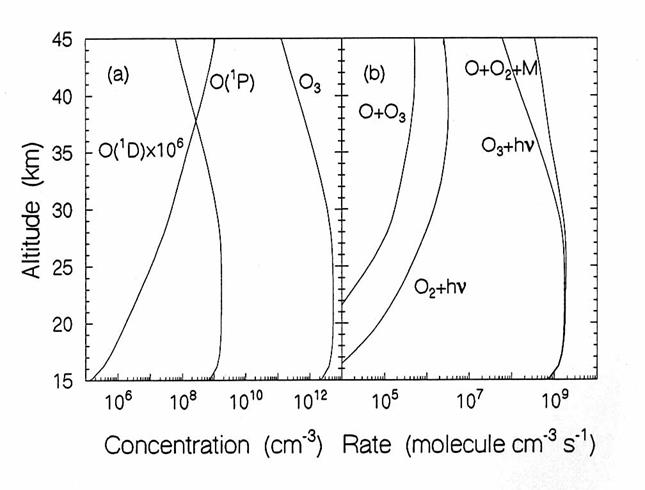 Let's now consider the more realistic case, on which there are other "polutants" that can break down ozone. The moste common ones are hydroxyl radical (OH·), nitric oxide radical (NO·), chlorine radical (Cl·) and bromine radical (Br·) (source), and the first two are the only ones naturally occurring. Therefore, the ozone remaining from our first scenario would be reduced to zero by reactions like:

The exact time that will take will depend on the elevation, as the abundance of ozone as well as the radicals can vary orders of magnitude trough the stratosphere. It will also depend on the exact spectrum of your "sustitute Sun", as some of those reactions are also mediated by light and might not happen in the absence of light of the right wavelength.

I know this answer might be disappointing, as it seem that a model would need to be run to really say how long it would take to destroy all stratospheric ozone. But still I thought would be an informative answer after 11 month without one. I hope, it motivate a better answer or the improvement of this one.

13
Ozone gas (O₃) endurance in the atmosphere
15
Why is the Ozone Layer 'hole' more pronounced in the Southern Hemisphere?
1
Ground level ozone formation and NO2 dependence over time
1
Ozone layer and radiation absorption
2
Stratosphere height vs. Temperature based on ozone concentration
1
Ozone Layer Problem
21
Is there still a hole in the ozone layer?