How are data from tiltmeters used to monitor volcanic activity?

I've just learned in this answer that tiltmeters (which I assume measure changes in tilt) are used near active volcanos. (Saw a mention in item 4. here also.)

What kind of geological (volcanological?) information can be learned from tilt data? Can it also offer predictive benefits, trigger evacuation warnings?

Tiltmeters placed on the flanks of an active volcano can measure changes in the slope angle of the flank. These changes are often inferred to be related to changes in the shape and activity of the magma chamber.

This article provides a quick and dirty example of how these instruments can be used, as well as their limitations.

In this case, the tiltmeters were able to capture the deflation of an erupting magma chamber, but not the precursory inflation. This leads to some inferences about the nature of the magma's ascent through the subsurface.

The article also references studies that were able to detect magma chamber inflation as well.

These kinds of observations definitely add to the body of evidence volcanologists use to assess risk of an eruption, but it's far from a slam dunk.

Here are some examples from that paper, both the long-term trend, and a higher time resolution display during a small eruption: 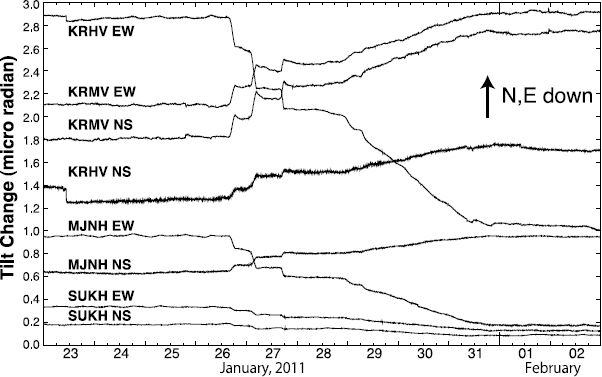 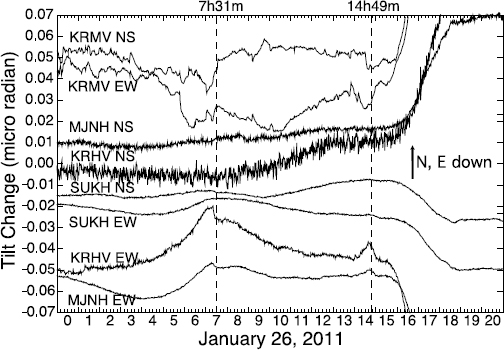 Fig. 10. Enlarged view of tiltmeter data during the period from 0:00 to 21:00 on January 26, 2011. Vertical line shows the occurrence time of the small eruption at 7:31 and the beginning of the sub-Plinian eruption, when the amplitude of the seismic tremor increased at 14:49. From here.

Not the answer you're looking for? Browse other questions tagged volcanology measurements volcanic-hazard field-measurements or ask your own question.

20
Why don't scientists use fire entry suits to study volcanoes?
4
What (if anything) can be learned from accurately recording tilt motion during seismic events?

16
Does volcanic activity fluctuate?
8
Are there measurement techniques that can help determine the exact geometry of a volcanic vent?
9
Was volcanic activity more prevalent when the dinosaurs roamed?
5
Do higher global temperatures increase volcanic activity and earthquakes?
2
Volcanic activity in Taiwan, ever in recorded history, much chance in the near future?
2
How does a whirling hygrometer work, how does it differ from static dry/wet bulb thermometer, and how to obtain humidity from its readings?