Why does the loss of water from a felsic magma encourage crystallisation?

Felsic magmas crystallise in the crust, unlike mafic magmas which tend to make it to the Earth's surface, for the following reasons:

My question is, why does losing water encourage felsic magma to crystallise in the crust? Is it something to do with water being a network modifier?

This answer is based on Winter's presentation for his textbook. Look up chapter 7 on his website, and start at slide 39.

First let's go through some of your statements:

Felsic magmas crystallise in the crust, unlike mafic magmas which tend to make it to the Earth's surface

This only means they ascend slower than mafic magmas. Eventually it all depends on buoyancy. If they're liquid and less dense than the surrounding rocks, they go up.

They are colder, so crystallise earlier, so travel less distance

Not necessarily. Their final crystallisation temperatures (aka "solidus") are also lower than mafic magmas. That's why they are liquid at temperatures that mafic melts would already be solid. This has little implication to the distance they travel (to a first order approximation).

They are more hydrous than mafic magmas...

True! The reasons for why felsic magmas are (generally) more hydrous than mafic magmas are not important now.

why does losing water encourage felsic magma to crystallise in the crust? Is it something to do with water being a network modifier?

Yes. Water, or more precisely, H2O acts as a flux: it is a chemical component that strongly lowers the melting temperatures of various materials, including rocks. It follows the basic chemical reaction of $\ce{rock + H2O = melt-with-H2O-dissolved-in-it}$.

The important part is that to allow H2O to be dissolved in the melt, you need to have some pressure. Otherwise the H2O just exsolves out and leaves the magma, similar to opening a bottle of carbonated drink (think coke). While there is pressure, the CO2 is in the drink. When you open the cap and depressurise it, the CO2 comes out of the drink.

Something similar happens in magmas. You have a felsic magma with H2O dissolved in it (otherwise it wouldn't be liquid, it would be solid) rising upwards through the crust. Because it goes up, the pressure around it goes down, causing H2O to leave the magma as bubbles of water vapour (or a supercritical fluid, depending on depth). Then, as the magma loses the flux, it solidifies before it can even reach the surface. Here's a diagram to explain this, in the albite-H2O simplified system, which is a good model for granites and felsic magmas: 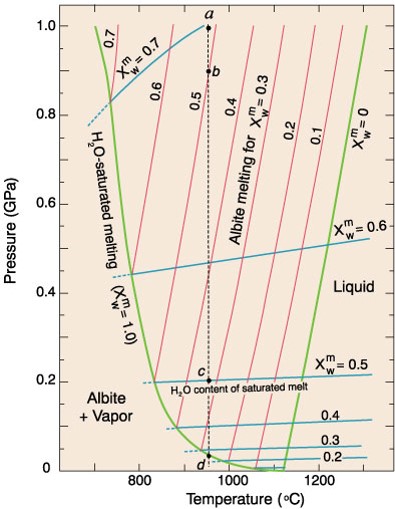 At surface pressure (bottom of the diagram) albite melts at slightly above 1100 °C. In a dry system, the higher the pressure, the higher the temperature. For example, at 5 kbar (0.5 GPa) the melting point of albite goes up to 1200 °C. If you add H2O at surface pressures, it doesn't change anything because there is not enough pressure to put the H2O in the (non-existing) melt. But at higher pressure it is possible for H2O to dissolve in the melt, thus allowing the existence of melt. For example at 5 kbar the melting point of albite with more than enough (aka saturated) H2O goes down to 800 °C. That's 400 °C below the dry melting point!

So what would happen if a melt containing some H2O starts rising upwards at constant temperature? For example at point a to d in the diagram. It will lose H2O as it rises, increasing the solidus temperature. Because the magma is not hot enough to be liquid at the surface, it will freeze before that, while still at depth.

Not the answer you're looking for? Browse other questions tagged water crust magmatism igneous or ask your own question.

33
Why do felsic materials have lower melting points than mafic?
14
Where does the water from rain in rain forests come from?
5
Why is ignimbrite associated with felsic magmas?
2
Water and explosive volcanoes in the Pacific ring of fire
13
Why does Earth have two kinds of crusts?
2
The magnetite is in which type of magma
6
Why should there not be water deep (e.g. below 6 kms) in the Earth's crust?