Where is the Arctic Circle for civil and astronomical twilight?

The Polar Circles are located at 66°33′46.7″ North and South, defining the minimum latitudes at which, for at least one 24 hour period during the year, the limb of the Sun never becomes invisible below the horizon.

However, because of the familiar phenomenon of twilight, where the Sun indirectly illuminates Earth's ground level by scattered light from the atmosphere, localities well south of the Arctic Circle still experience long periods without actual nightfall.

geography solar-terrestrial-physics astronomy
Share
Improve this question
asked May 18 '17 at 16:02

As mentioned by Barry in the comments, you just have to substract 6 degrees of latitude to get the ring around areas were it never gets DARKER than civil twilight or darker for 24 or more hours (or 12° for nautical twilight and 18° for astronomical twilight). That would be:

To be clear, those circles surround the places where on summer solstice there is no complete nightfall (i.e. it doesn't get completely dark according to the different twilight standards).

In turn, you can think about other set of equivalent circles where it never get BRIGHTER than a given type of twilight for at least 24 hours, those would be

To be clear again, those circles surround the places where on winter solstice there is no tace of daylight (i.e. they doesn't get any daylight according to the different twilight standards). 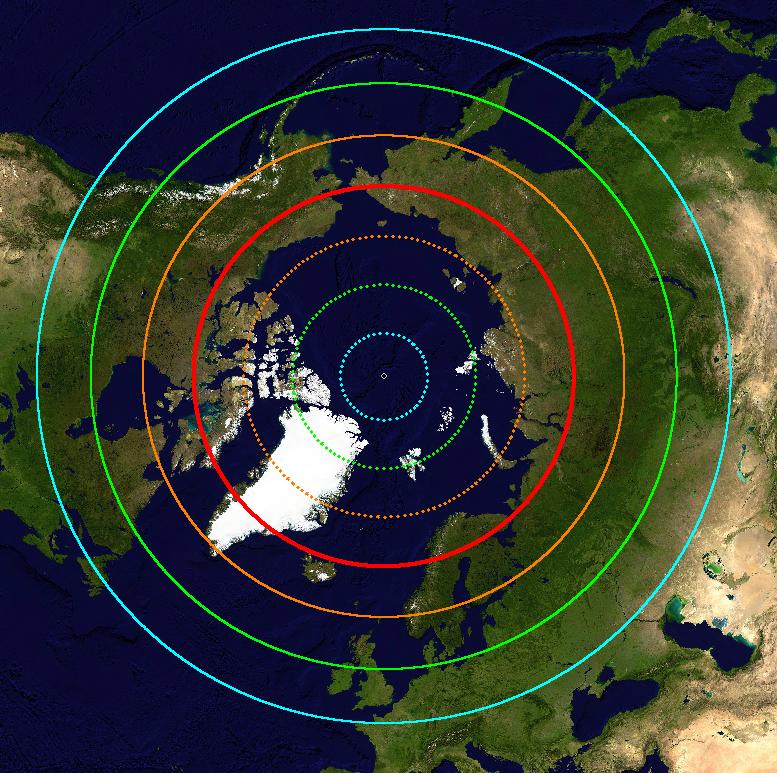 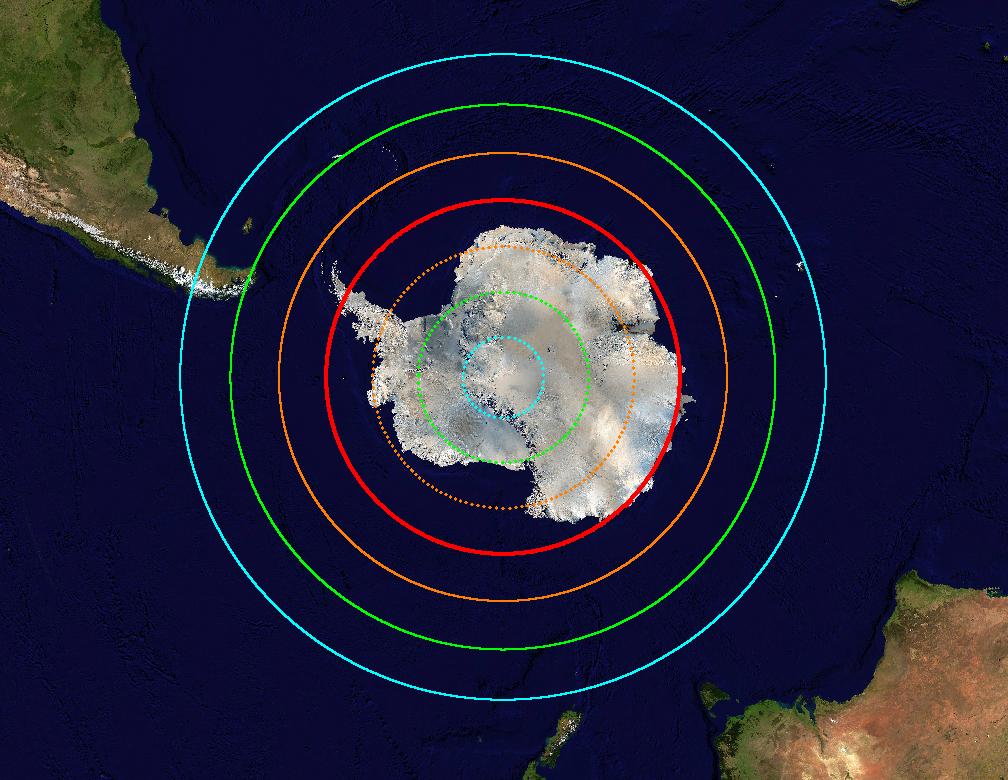 And to have a world view, in geographic projection, they would look like this

The twilights are defined like that (i.e. Sun 6, 12, 18° below the horizon), so no corrections have to be made due to refraction or the size of the solar disk. Such corrections would only apply if you want to find the "effective" polar circle where the Sun would/would not be visible for 24 hours even with an horizon perfectly free of obstacles. Due to those corrections, the polar night (at the Winter Solstice) only really happens some 80-100 km poleward of the polar circle. In contrast, at the polar circle itself, the Sun can be seen even at the winter solstice.

Not the answer you're looking for? Browse other questions tagged geography solar-terrestrial-physics astronomy or ask your own question.

5
Where can I find solar radiation data for specific land areas?
9
Is there a special name for along-course elevation profiles of rivers, and where you can you find them?
2
Term for the thing that shines radiation onto a black body
3
What is the most optimal latitude on Earth for the generation of extreme maximum temperatures?
3
What is the lowest latitude for which if the ideal solar energy received each day for a year is graphed, the graph would contain one peak?
4
Why isn't the side of the earth facing the sun completely illuminated by sunlight from the north to the south pole every day of the year?
3
What causes this arc in the night sky where the background is brighter on one side than the other?
2
How do we know the Arctic is just ice?