Abiogenesis: Formation of Lipids from Montmorillonite

I have been really interested in scientific hypotheses regarding abiogenesis, particularly the lipid-world hypothesis. However, I could not find information on the chemical pathway that leads to the synthesis of amphiphilic molecules such as fatty-acids. All I've been able to find is that it involves the mineral montmorillonite which allows the step-wise formation of fatty acids using carbon monoxide (CO) and hydrogen (H). However, I want to know the exact chemical process. Thanks! Here's a link to a video explaining Abiogenesis. 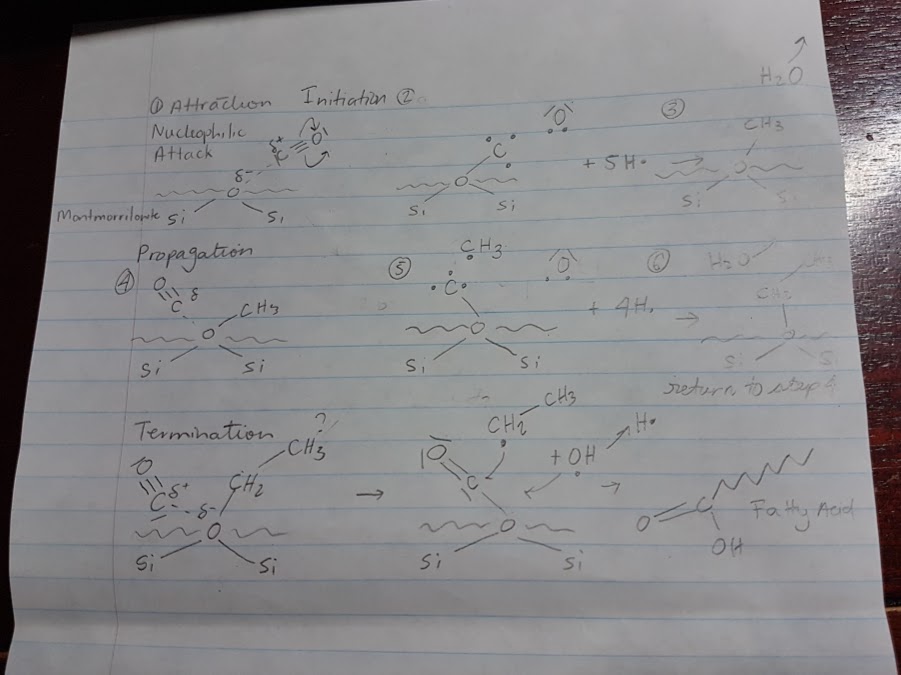 Note: I simplified the Montmorillonite structure and only included the parts that were involved (mainly the very negative oxygen atoms)

My hypothesis is the following: If alkanes were present in the earth's oceans, polymerization of fatty acids could have occurred via chain radical addition. However I'm not sure where the initial radical would come from on the montmorillonite clay particle. Just an idea.

geochemistry biogeochemistry
Share
Improve this question
asked May 18 '17 at 23:49

Good question! One that's stuck with me since reading about clay's purported role in providing scaffolding to early organic molecules in a Scientific American article from the late '80s. Many years later I ran into a bonafide clay scientist who said "Of course!" when I asked her about clay's role in establishing early life.

I suspect that molecular attraction and ordering is more of a driver than a specific chemical process (but I'll claim ignorance here). What I have found is a slide from a talk entitled "Chemical Evolution Theory of Life’s Origins" given at the State University of Stony Brook's Astronomy department in which the author highlights an underappreciated chemical property of clay sheets, namely that of mirror symmetry on opposing crystal faces. Recall that these sheets are actually molecular-thin crystals attached to each other by very weak bonds, the implication being that the crystal surfaces themselves are mildly charged providing a surface for monomers to automatically align: 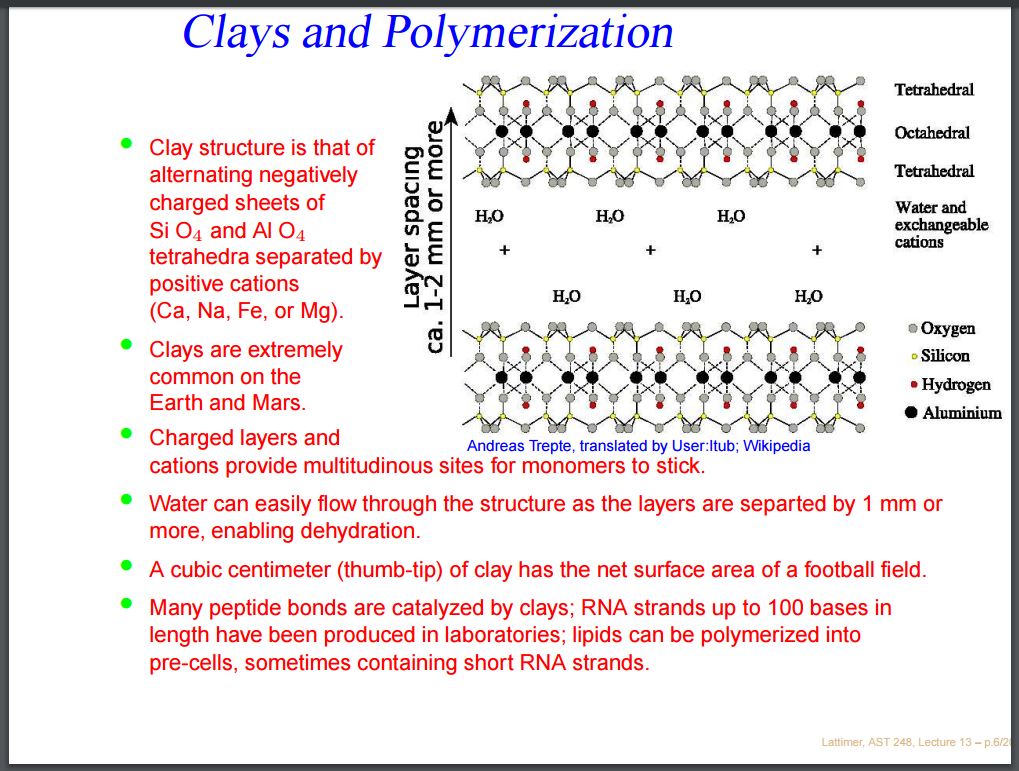 Every physical separation between these crystals provides identical faces on opposing sides of the void. Do these faces act as holding jigs for water-borne monomers to line up into lipids? The authors lab results confirm this. However he provides no details for how, specifically, that catalysis happens.

It's worth noting that this (clay-based) process sounds almost exactly the reverse of chemical cracking of long-chain crude petroleum compounds in which naturally occurring molecular sieves are used to break bonds (and allow re-ordering of resultant fragments). From Wikipedia:

The catalytic cracking process involves the presence of acid catalysts (usually solid acids such as silica-alumina and zeolites) which promote a heterolytic (asymmetric) breakage of bonds yielding pairs of ions of opposite charges, usually a carbocation and the very unstable hydride anion. Carbon-localized free radicals and cations are both highly unstable and undergo processes of chain rearrangement, C-C scission in position beta as in cracking, and intra- and intermolecular hydrogen transfer. In both types of processes, the corresponding reactive intermediates (radicals, ions) are permanently regenerated, and thus they proceed by a self-propagating chain mechanism. The chain of reactions is eventually terminated by radical or ion recombination

Here's another important paper that I wish I had more time to read: Origins of life: From the mineral to the biochemical world, in which, among many other important things, the author writes,

One of these involves enantioselective adsorption on crystal faces. Hazen et al. [13] have investigated the adsorption of the two forms of an amino acid (aspartic acid) on well-defined faces of calcite crystals. These faces themselves already possess the property of chirality, i.e. the arrangement of atoms exposed on the surface is not superimposable to its mirror image...

This paper is a pretty good resource. This "brief guided tour through “mineral-based” prebiotic scenarios" is clear and the references likely complete, and it also highlights the role of clays in storing molecular information, as well as the role of metal sulfides in establishing (maybe) early metabolic reactions: 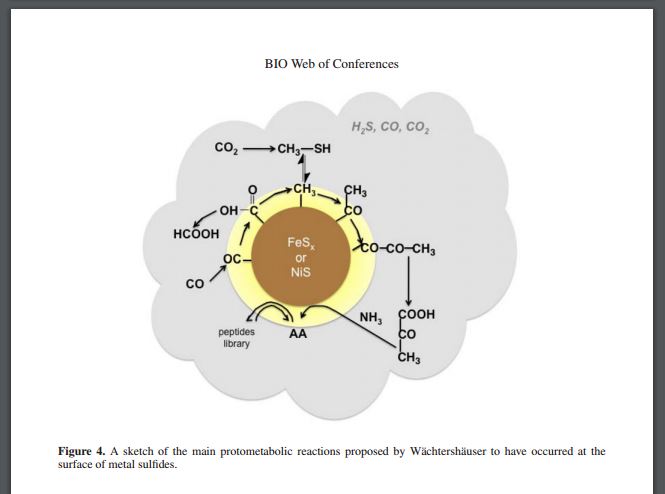 Let us know what you dig up!

Not the answer you're looking for? Browse other questions tagged geochemistry biogeochemistry or ask your own question.

9
Did an impact crater influence the formation of uranium deposits in South Australia?
7
Why is hydrogen formation in serpentinisation an exothermic reaction?
6
Mars maar craters explosive style formation gravitational effect
4
What are the natural causes for methane formation?
9
Is it true that "All life on earth gets its energy from the sun"? How much biomass is not derived from photosynthesis?
4
Where does molecular hydrogen in the atmosphere come from?