What is meant by inverted water table? 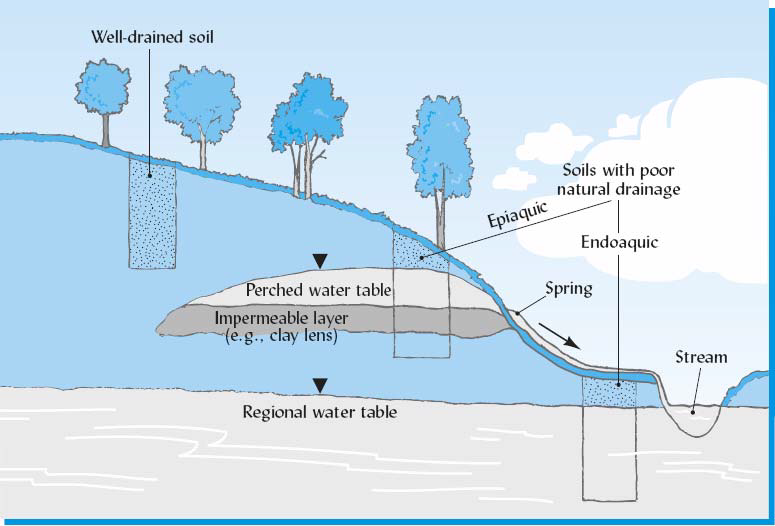 To amplify on Gary's answer for the situation under a stream: Surface water will be connected to an unconfined groundwater aquifer if the sediments are saturated between the aquifer and the stream. If the head (the elevation of the water i.e. its pressure) is lower at the stream than the adjacent sediments, then it will be a "gaining stream" the water in the aquifer will flow into the stream. If the head is higher at the stream it will be a "losing stream" and water will flow into the aquifer.

Note that the gaining or losing flow can be very low. The difference in head tells you the potential flow direction but the permeability of the sediments determines how much flow you will get for a given potential. It is analogous to a battery voltage (potential) and a resistor (permeability) governing currrent (flow).

When water is infiltrating an aquifer system which contains an unsaturated zone (vadose zone), whether from an infiltration bassin or a river, The first centimeters usually are saturated, the bottom of this saturated layer is called the inverted water table because under the layer there is a soil which is not completely saturated.

Not the answer you're looking for? Browse other questions tagged hydrology groundwater hydrogeology water-table unsaturated-zone or ask your own question.

15
Are there situations where the groundwater table doesn't follow the morphology of the surface?
14
Recharge a dry aquifer?
2
What is difference between partially penetrating stream and fully penetrating stream?
2
Searching for ground water
1
What effect does concretization (paving/flooring with concrete) has on ground water table
0
What effect does river channelization have on the surrounding water table?