How and when people first realized that Antarctica is a continent?

Recently I got startled by this question I asked myself and I can't seem to find any sources of answers.

I have hypotheses about how it could have happened: It could have been by the fact that if you stand there you don't drift anywhere as opposed to the North Pole. Also perhaps by altitude.

What about nowadays? Do we use measurements of seismic activity to infer the shape of Antarctica? Are there other methods?

The idea of a southern continent is older than the actual discovery of the Antarctica. There was an expectation of the possible existence of a Terra Australis balance the global landmasses and the theory went far back. However, those models were not based on true evidence but rather aesthetic arguments that later just happened to come true. In contradiction, landmasses were also expected to surround the North Pole in the Arctic, and that turned out to be wrong. 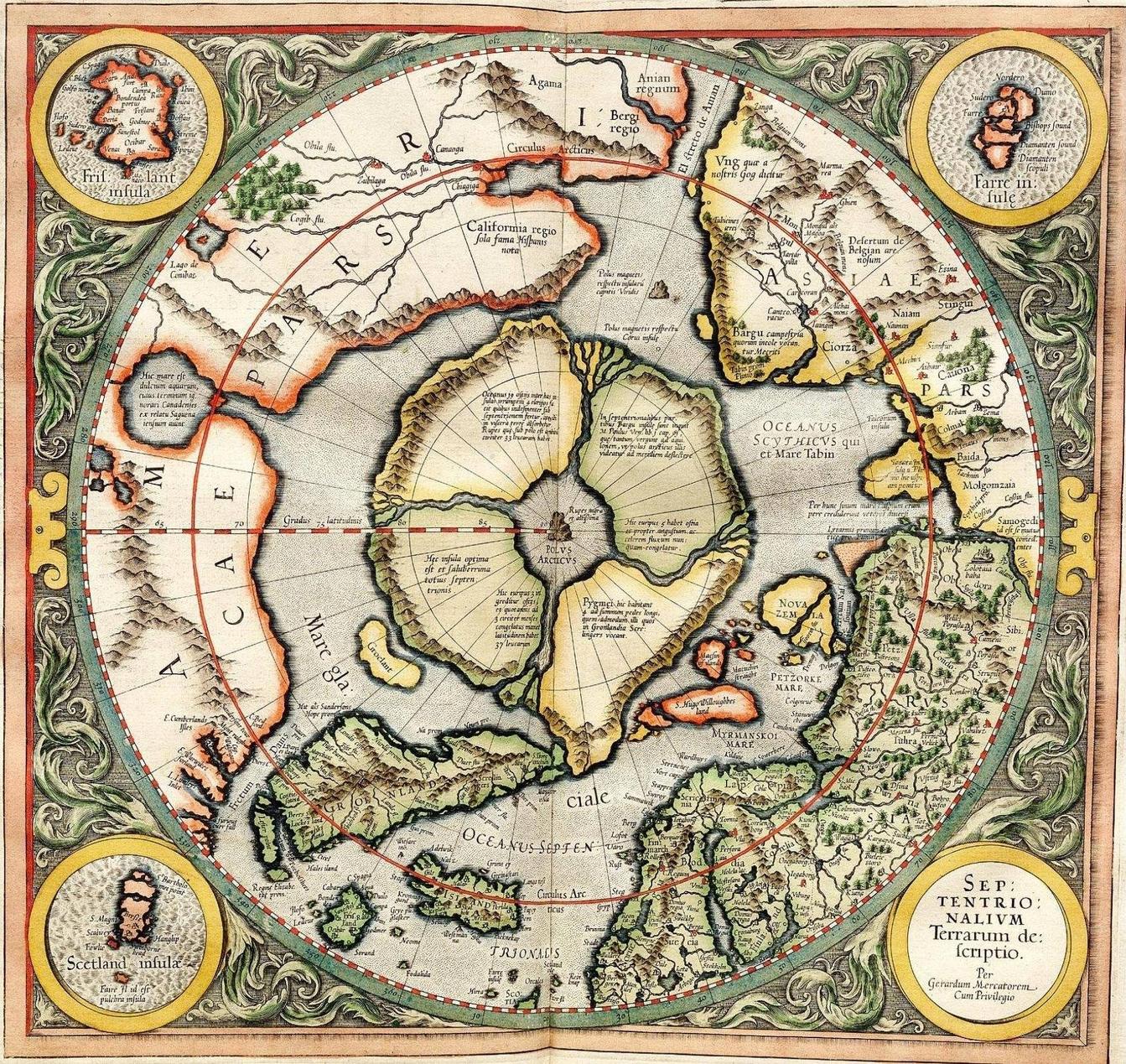 Mercator (1595) map of the North Pole and surrounding continent. Some practical canals are suggested to facilitate the short cut from Atlantic to Pacific

There have never been any human population on Antarctica prior to western explorers but Maori navigators, had experienced the cold waters for centuries.

From the 18th century, famous explorers as James Cook and Bellingshausen came close and made sightings that pushed the limits of whaling and hunting, but there was little interest or possibility to actually land and map the area. Cook's circumnavigation rather limited the expected extent of a much larger Terra Australis.

Landings and activities were focused on the sub-antarctic islands and to a minor extent, the peninsula. There was little reason for anyone to cross the dangerous roaring fourties, furious fifties and screaming sixties to get to icy waters with little prospect of economic profit or even survival. Stories about early explorers have been questioned and proved wrong multiple times. 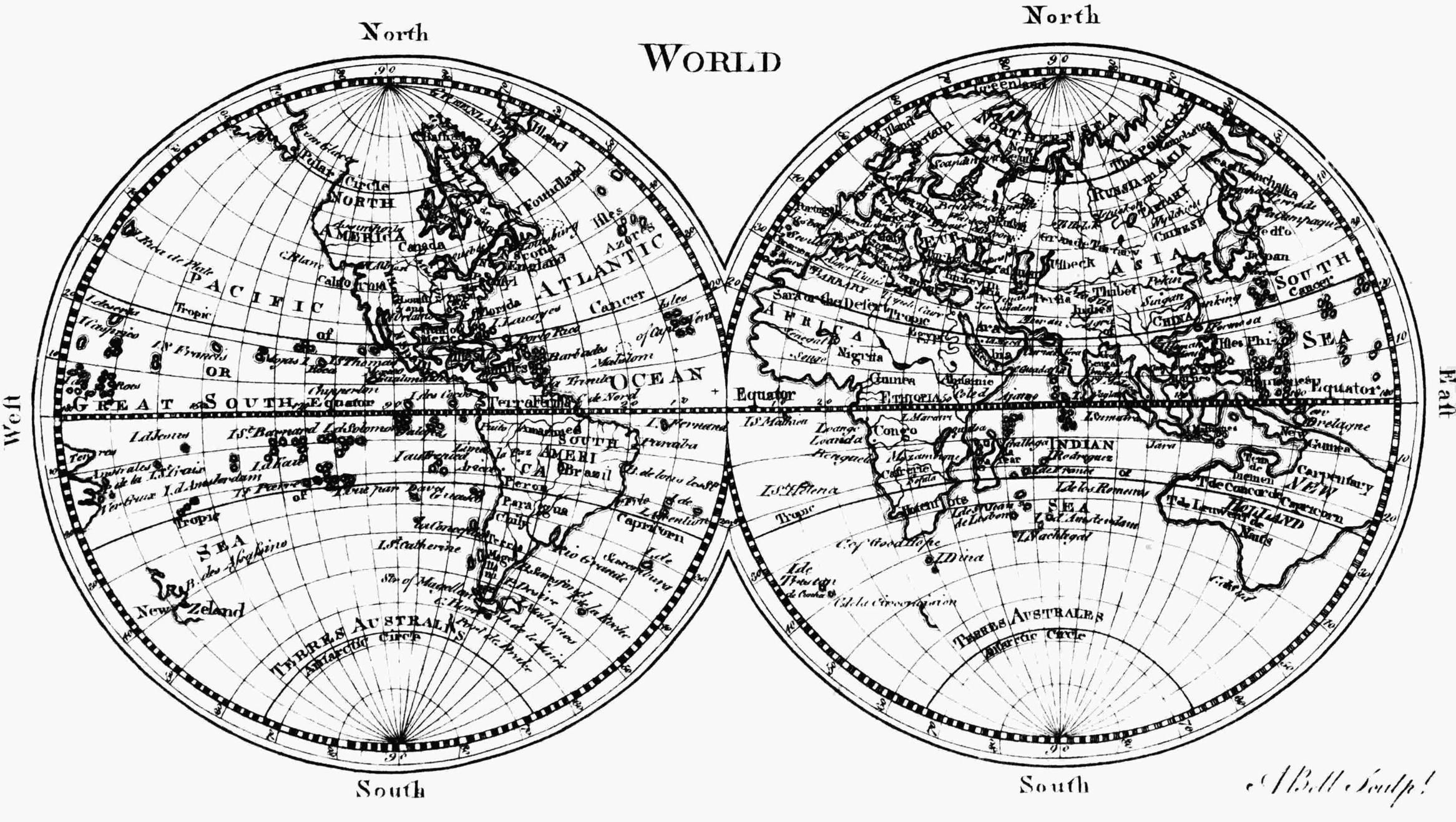 Map from 1770 before the continent was descovered

The first concepts of an Antarctic continent based on actual sights probably originate from The United States Exploring Expedition (1839-42). Wilkes described the findings as a

vast Antarctic continent [protected by] an impenetrable barrier of ice

It's not easy to access the coast and the landing opportunities are few, especially in East Antarctica. USEE's findings have been questioned later and there seems to have been little substance in the claims. The sighted coast might as well have been just clouds. Ross even accused him for cartographical deceit.

Even as exploration continued and increased from the 1890s, the nature of the continent continued to puzzle explorers and adventurers. There was e.g. no consensus whether East and West Antarctica belonged to the same continent or if an icy sea, similar to the Arctic, separated the isolated visited outcrops. 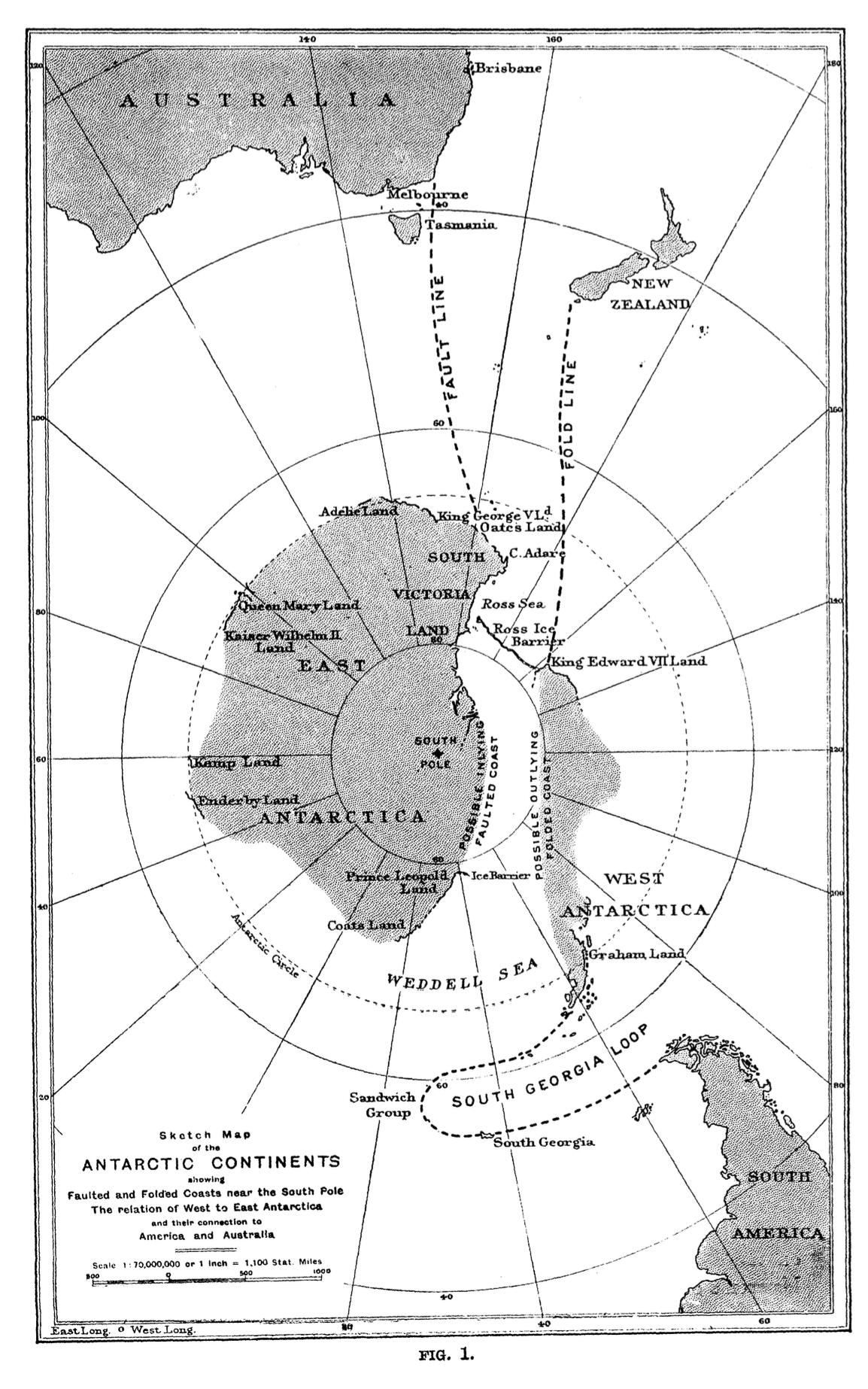 Undoubtedly one of the most fascinating geographical problems, if not the most attractive now that both poles are discovered, is to determine if there are one or two continents at the South Pole. At an animated discussion in the hut, I pointed out that the South Georgia loop carried the "Pacific" type of coast into West Antarctica, whereas Victoria Land (and apparently Prince Leopold Land) belong to that type characterized by block faults and known as the Atlantic type.

Even as the geologists of the time had a developed vocabulary for rock types and correlations, they still couldn't be sure that Antarctica was indeed one continent or two. As a side note, it should be mentioned that they are indeed right in the doubts. Today we know that East and West Antarctica have very different history and properties. See e.g. Boger (2011). 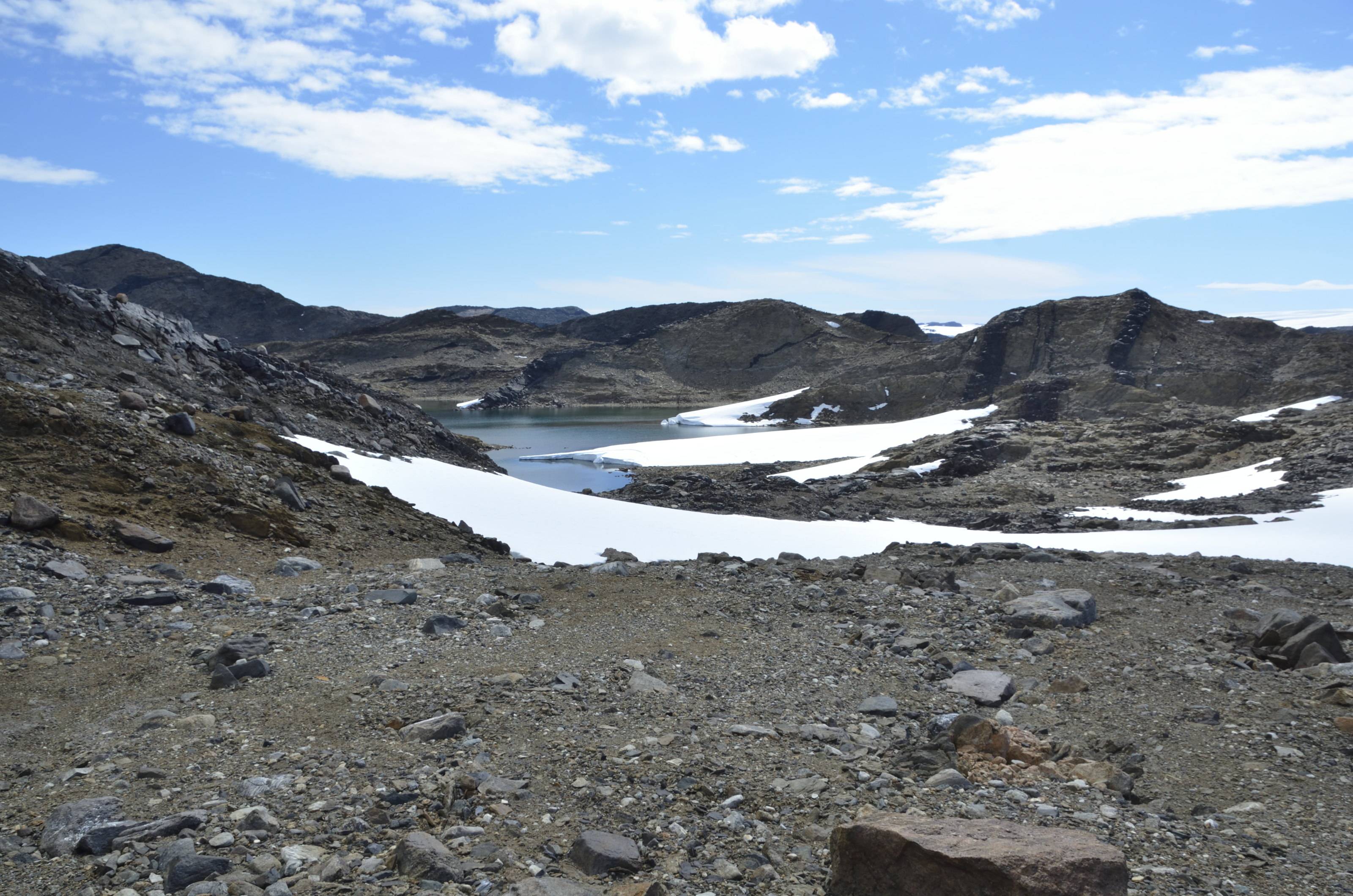 Large areas of Antarctica is ice-free, eg. this valley in Vestfold Hills, East Antarctica. The area was first explored in the mid to late 1900's but sightings of outcrop would assure explorers that they actually saw the continent they were expecting and not floating ice.

Geologists could also early correlate the rare findings from Antarctica with surrounding continents and started to reconstruct the Gondwana assembly, a work that is still ongoing and due to the lack of outcrops in Antarctica is to a large extent based on geophysical data. Still, geologists and geophysicists are looking for similarities in Africa, India and Australia to understand the nature of the Antarctic geology under the ice cover.

With aviation, it was finally possible to map the hinterland of the continent, and great discoveries were made as late as 1946–47 during Operation Highjump and during the Soviet's expeditions in the 50's. (Don't miss this short footage of the discovery of Bunger Hills: Youtube)

As far as I know, it was not until the International Geophysical Year (IPY) 1957-58 an international effort deploy scientists and collect data firmly defined the physical shape of the continent, that we are still refining today. International collaboration appears to be the key to successful research in Antarctica.

Seismic data is indeed very important to understand the Antarctic lithosphere, but the resolution is low due to the low seismicity and especially the limited number of deployed seismometers. This is, however, improving during recent years and a number of new studies are using seismic tomography and receiver functions to measure the continental shape of Antarctica. See e.g. An et al (2015a) and An et al (2015b). Seismic data is also used to understand the ice sheets and to derive the heat flux that causes basal melting.

Also very important is satellite potential field data. Gravity data e.g. GOCE from ESA is and important constraints, but the resolution is low. Magnetic data especially from airplanes but also satellites as the flight lines are still sparse is used to map and understand geological terranes covered by ice. The ICECAP project is collecting high-resolution data from flights to improve our understanding of the ice sheets, glaciers and also the bedrock under.

A good start to look for data and information about the physical nature of Antarctica is to download the datasets in the Quantarctica package. It includes gravity and magnetic data (that should be updated soon). The bedrock elevation data can show you that actually large parts of the Antarctic continent are submerged under sea level due to the weight of the ice sheets, subglacial erosion and lack of major endogenic processes that can cause rapid uplifts. For a geologist, it's however not the elevation that the chemical composition and thickness of the crust that define it as one continuous continent. 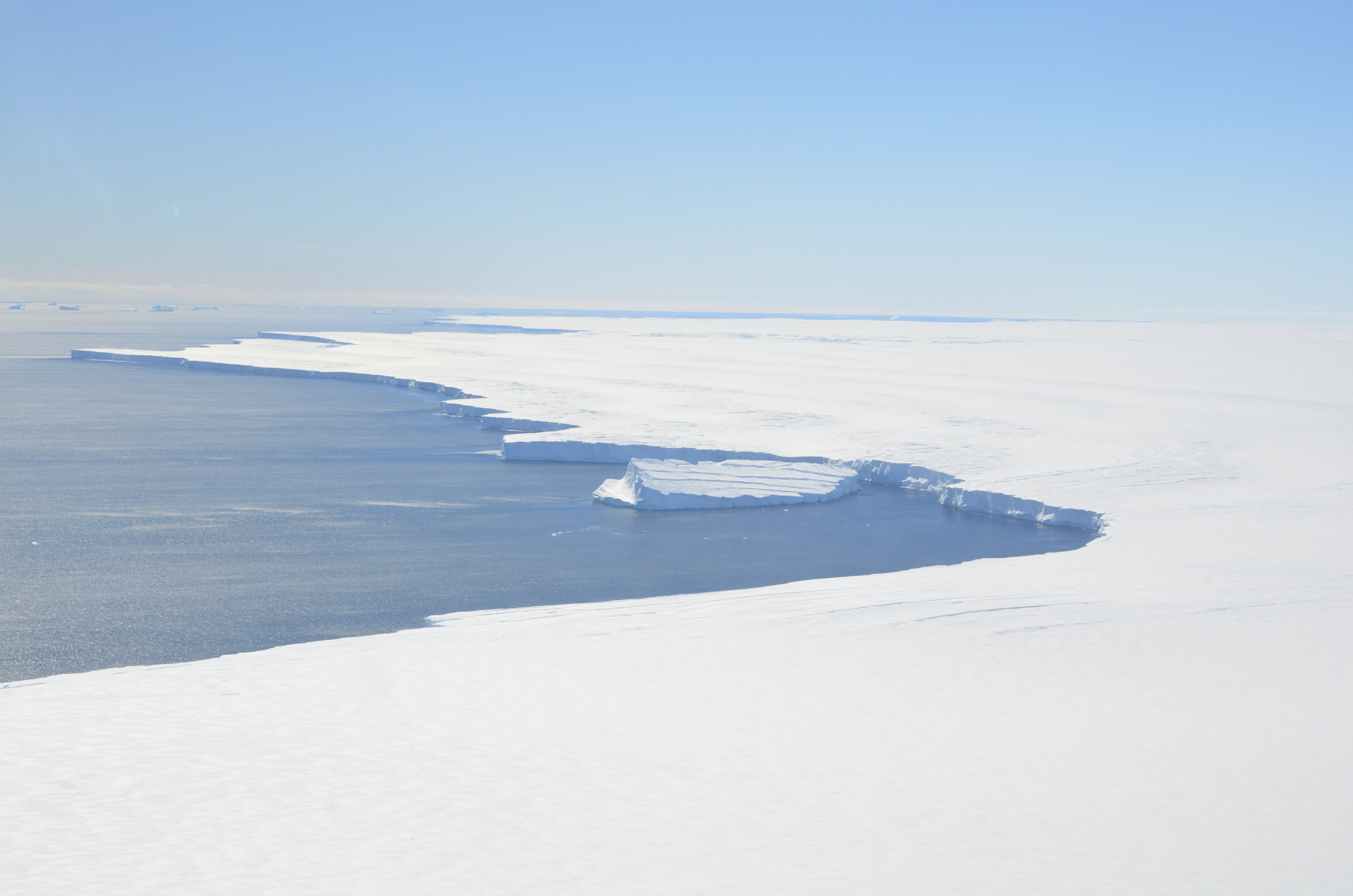 Finally, it's worth notice that the Internet is flooded by ridiculous conspiration theories about the lack of information about Antarctica. Whiles being entertaining to watch (with a couple of beers or so), there is not any truth in them, but the phenomina gives in insight in how myths and lies are created and blooming on the internet and how important it is to stay critical about unreliable sources. The reality is that Antarctica is very difficult and expensive to access and, thankfully, its sensitive nature is well protected by international agreements.

It could have been by the fact that if you stand there you don't drift anywhere as opposed to the North Pole.

While the Antarctic ice sheets are far more stable than the north polar sea ice, they do actually move: at the South Pole, the motion is only about 10 metres per year, but coastal glaciers can move much faster.

Not the answer you're looking for? Browse other questions tagged antarctica continent history or ask your own question.

11
How does Antarctica stay frozen?
6
Is it coincidence that Antarctica is centered on the south pole?
6
How do glaciers move? Could Antarctica be separated?
5
How do scientists reconstruct pre Cretaceous continent if all plates that are currently left are younger than Cretaceous?
4
Giant Cavern the Size of Manhattan Under Thwaites Glacier in West Antarctica - how was satellite and airborne radar data combined?
9
I just read news that Antarctica had set a new record high temperature, above 18 °C. How can this be the case if it is currently winter there?