Not only are fronts associated with (extratropical) lows, but by in large, fronts are extensions of those lows, as shown by the following hand analysis (from the US Storm Prediction Center): 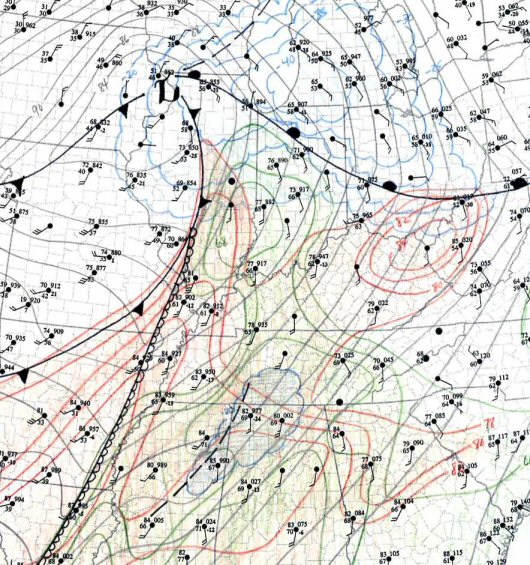 There's a lot going on in the image, but try to focus on the many black lines, which show pressure: they're kinked around each front (and even the dryline). This indicates that the pressure is higher on either side of the front. (for another good example: this set of images from the 1993 Storm of the Century from the National Weather Service). Now the kinks in these drawings aren't caused by the actual layout of observation in the image, but added by the understanding of the meteorologist performing the analysis. Generally observation sites are too widely spread out to see the small pressure kinks. However, they do sometimes show up in high-resolution numerical weather models forecasts, even despite not being in the initial observation data they run from: 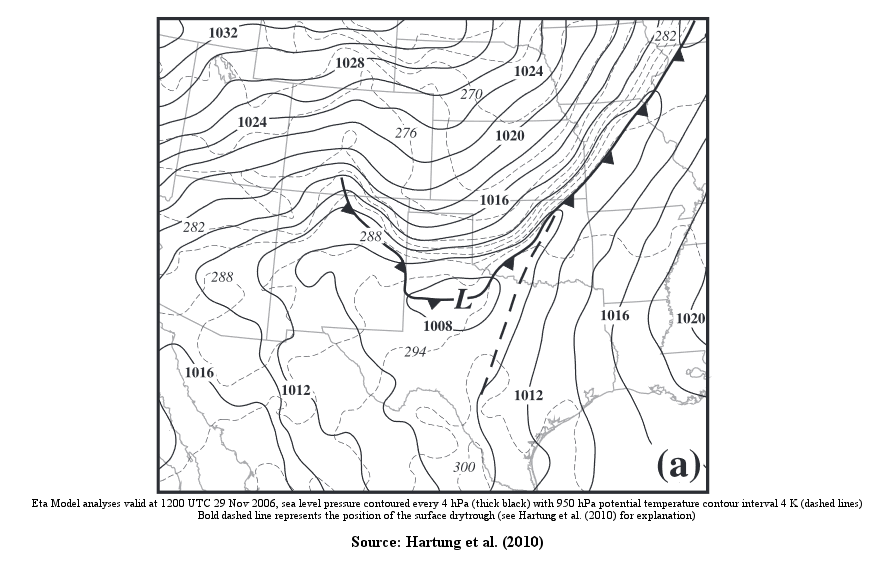 (From Hartung as indicated... note that the kinks are up instead of down, but that's actually the same result, still pointing away from the low, showing lower pressure at the center of the kinks.)

Though pressure troughs can be spatially hard to see without extremely dense observation networks, they can be made out instead in temporal plots at single locations. After all, falling pressure has been noticed as a sign of bad weather as far back as the the dawn of America (I often hear Benjamin Franklin cited, but it appears it goes back further to Otto von Guericke in the 1600s). For example, this trace of temperature and pressure from a 1911 cold front in Louisville, Kentucky:

So, WHY are fronts low pressure areas?

It goes to its nature in connection to winds. Consider the images below:

The plots are two days apart. So how do you get the conditions to change from the left image to the right over such a period? While clouds, storms, and sunlight differences can help drive small contrasts, the only way to get such a large, widespread boundary... is to have winds develop that draw the contrasting temperatures tighter together...

Indeed, this is exactly what forms and sustains a front. You can look at surface weather maps and almost always see this convergence, or gathering together of winds, at fronts, even if only slight, as indicated in this idealized diagram set: 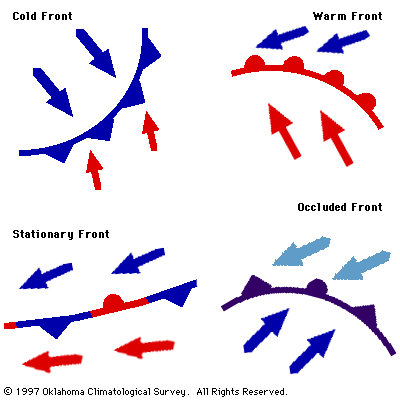 (Image modified from OKFirst, the education arm of the Oklahoma Mesonet program. See comments for modifications I made.)

The thing is, there's only a few basic forces that drive wind formation... and in the lower atmosphere, it turns out that the pressure gradient force outweighs the others enough such that, on the large-scale, air always flows from higher pressure towards lower pressure.

So if you put those two ideas together:

The resulting conclusion is that the location where winds are flowing together... which is the front itself... must be a low pressure area.

(What causes low formation in the first place?
Winds aloft typically coupled with terrain enhancements or other small-scale perturbations. The strengthening temperature gradients actually feedback to intensify and favorably realign the winds aloft... such that, despite the influx of air into the low pressure (which one might think would "fill in" the low pressure with more air, dimi), the air is actually ventilated from the system, allowing it to deepen to yet lower pressures values and strengthen further... continuing on until finally the upper-level storm system surges ahead of the surface low and/or the frontal boundary occludes, cutting warm air from continuing to flow into the surface low center.)

Can you get divergent winds near a developed front?
Yes... in fact, there's a name for that process, it's called frontolysis. Divergent wind does indeed work to destroy a frontal gradient. And so rising pressure is found connected to dissipating fronts. However, rising pressure has a long ways to go before it's actually a high pressure itself! Long before it would create a bona fide high, the early pressure rises only REDUCE the strength of that local pressure minimum... and during that time the temperature gradient will very quickly begin to blur out and fall below the strength of which we really notice. At the same time, even in this period of decrease, note that this dissipating "front" would no longer have any of the other typical conditions we expect with fronts (no more rising air motions [UIllinois], which is what in turn creates the unsettled weather, clouds, strong winds, storms, etc).

Why is a front so quick to dissipate? Well, in large part because it's not a level situation; indeed, some storm energy is continually lost away to friction. Because of this, a front actually needs continual reinforcement to even maintain its gradient. Some times the pattern will permit fronts to continue through repeated periods of weakening and intensification as upper troughs pass by. As a trough comes by and then shifts by on east (in tandem with the primary surface low), the front will start to weaken some... perhaps gradually becoming stationary... only to reignite when the next upper system comes in from the west [stationary fronts aren't, as may often be suggested, a cold front and warm front "at war", but instead rather more like a lull in the "battle", where the cold front has run out of steam, but readied next for the warm air to start surging back north should another trough/low move in to re-fire the convergence]. Often you can see quite a long chain of fronts (troughs) connecting together lows pressure systems across continents... (which work into the shape and positioning to the polar jet stream). Other times, when the upper systems come less consistently or the upper flow starts to break down/shift into other regions, the front will quickly fade from existence. So much so that I don't believe you're ever not going to see anything like a true front anywhere near a formative synoptic high pressure... unless maybe a giant meteor or as-of-yet-unseen-in-size nuclear bomb were precisely set loose upon a front. And then... well I suggest trying to witness the brief time that the high pressure is connected to the frontal boundaries... should probably be the least of your concerns!

Of course an important note is that not all lows have fronts, not nearly. Only "extratropical" (baroclinic, cold-core) lows have fronts. Tropical (barotropic, warm-core) lows are symmetrical, and don't generate their energy from horizontal temperature imbalances, but instead when overall warming temperature, typically in the mid-levels, decreases the amount of air in the entire tropospheric column...

And for those of you better versed in the more rigorous science... while looking for material for this answer, I came across an absolutely great resource that may prove helpful to those looking to dig much more at the mathematical formulations of frontogensis/frontolysis, the consequential flow types involved in them, and how they impact forecasting: this awesome guide from NOAA's Warning Decision Training Branch.

This begs the question "How do low pressure systems form?" I'll label the steps of the "Norwegian Cyclone Model" in brief layman-speak.

High pressure areas, however, have a different formation process, one the involves converging winds and cooling.

Not the answer you're looking for? Browse other questions tagged synoptic or ask your own question.

12
Are the “polar vortex” and “cut-off lows” over/near the Great Lakes new phenomena?