What produces these distinct shapes in the Rub' al Khali seen from space?

update: Searching "Rub' al Khali Empty Quarter" found "Q2: What are sabkhas?" in https://www.geocaching.com/geocache/GC6BYQ0_rub-al-khali-the-empty-quarter which seems to be related.

From the NASA image gallery; and also Catalog Page for PIA11084 where the caption says:

Original Caption Released with Image: The Rub' al Khali is one of the largest sand deserts in the world, encompassing most of the southern third of the Arabian Peninsula. It includes parts of Oman, United Arab Emirates, and Yemen. The desert covers 650,000 square kilometers, more than the area of France. Largely unexplored until recently, the desert is 1000 km long and 500 km wide. The first documented journeys made by Westerners were those of Bertram Thomas in 1931 and St. John Philby in 1932. With daytime temperatures reaching 55 degrees Celsius, and dunes taller than 330 meters, the desert may be one of the most forbidding places on Earth.

Question: The pattern shown in this image has an amazing amount of approximate repetition of shapes; long straight segments with a periodicity of about 2 kilometers, "stair steps" northward and sharp, pointy extensions southward. Is there any understanding how such a distinct pattern could be formed? 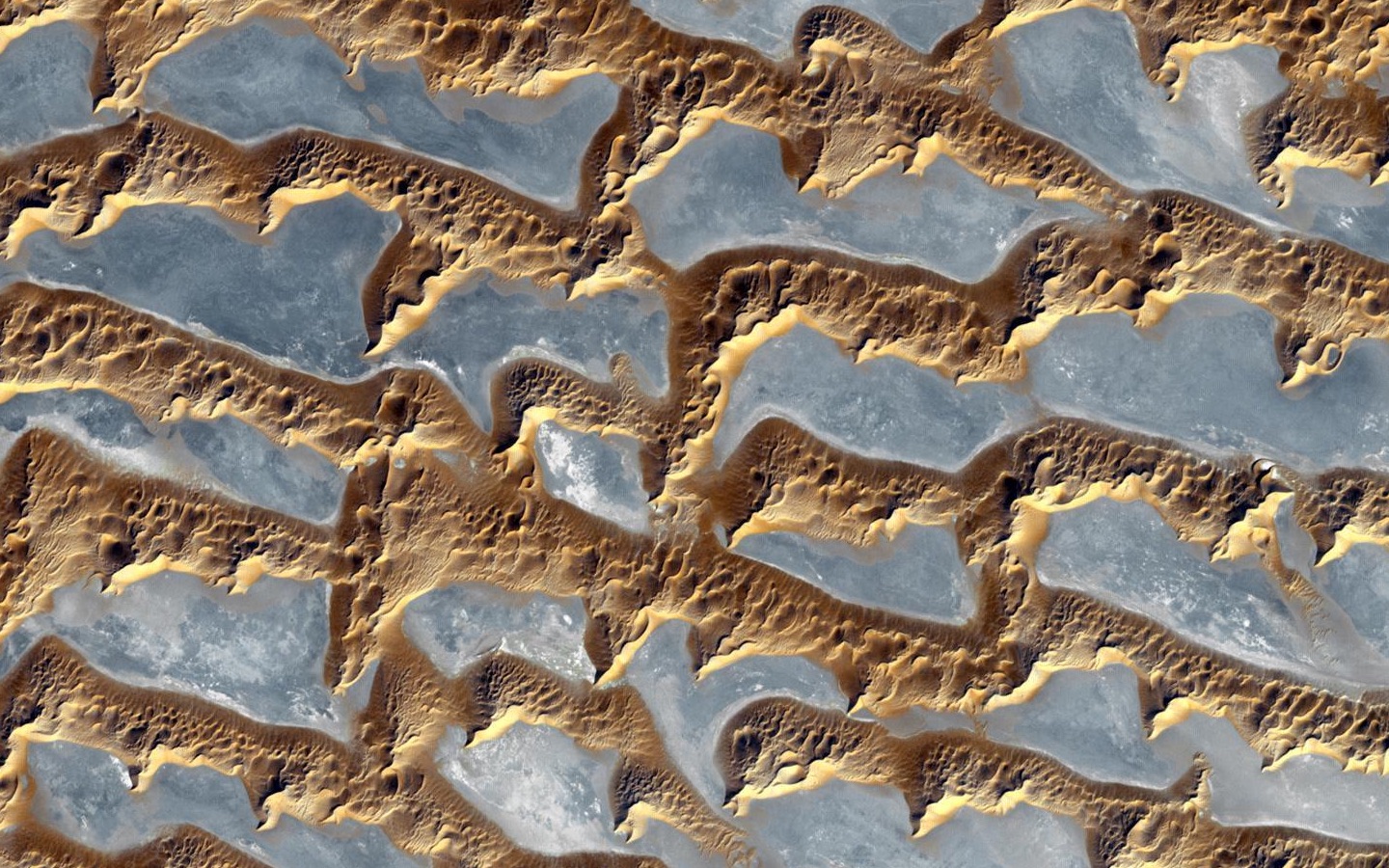 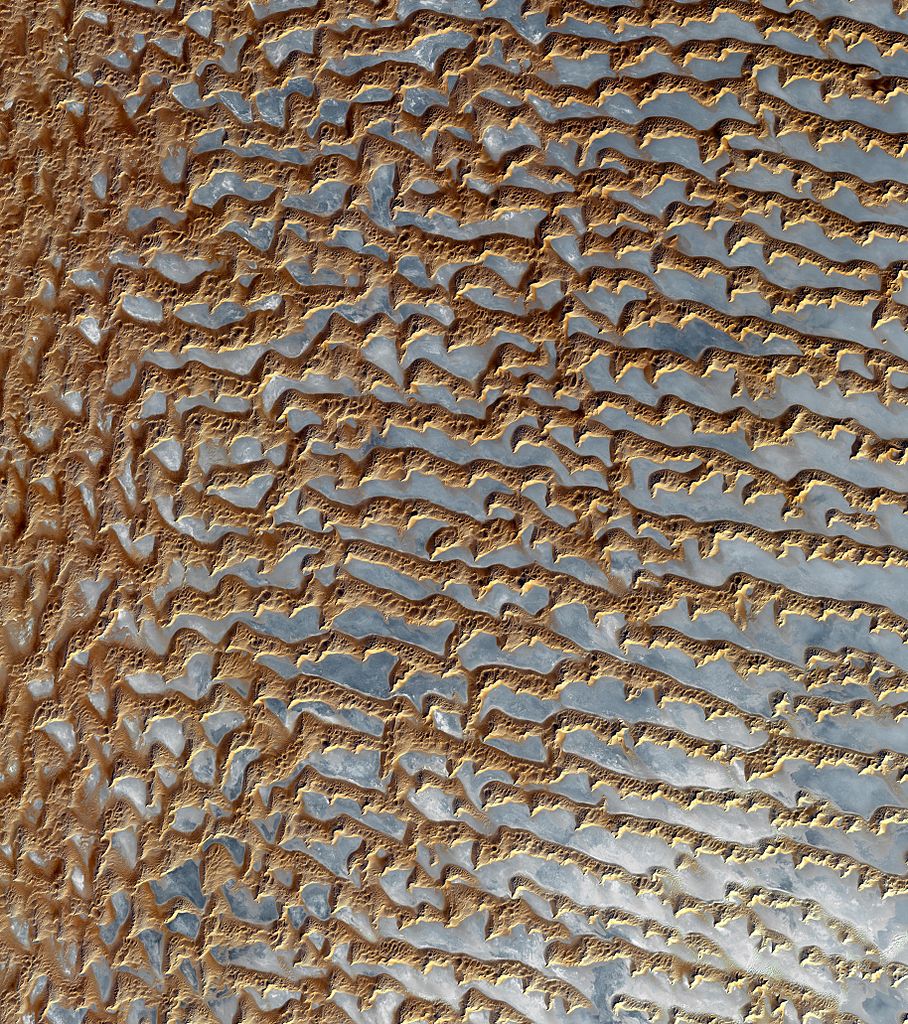 below: screen shot from Google Maps confirming orientation. Marker is at 20.7N, 53.6E. 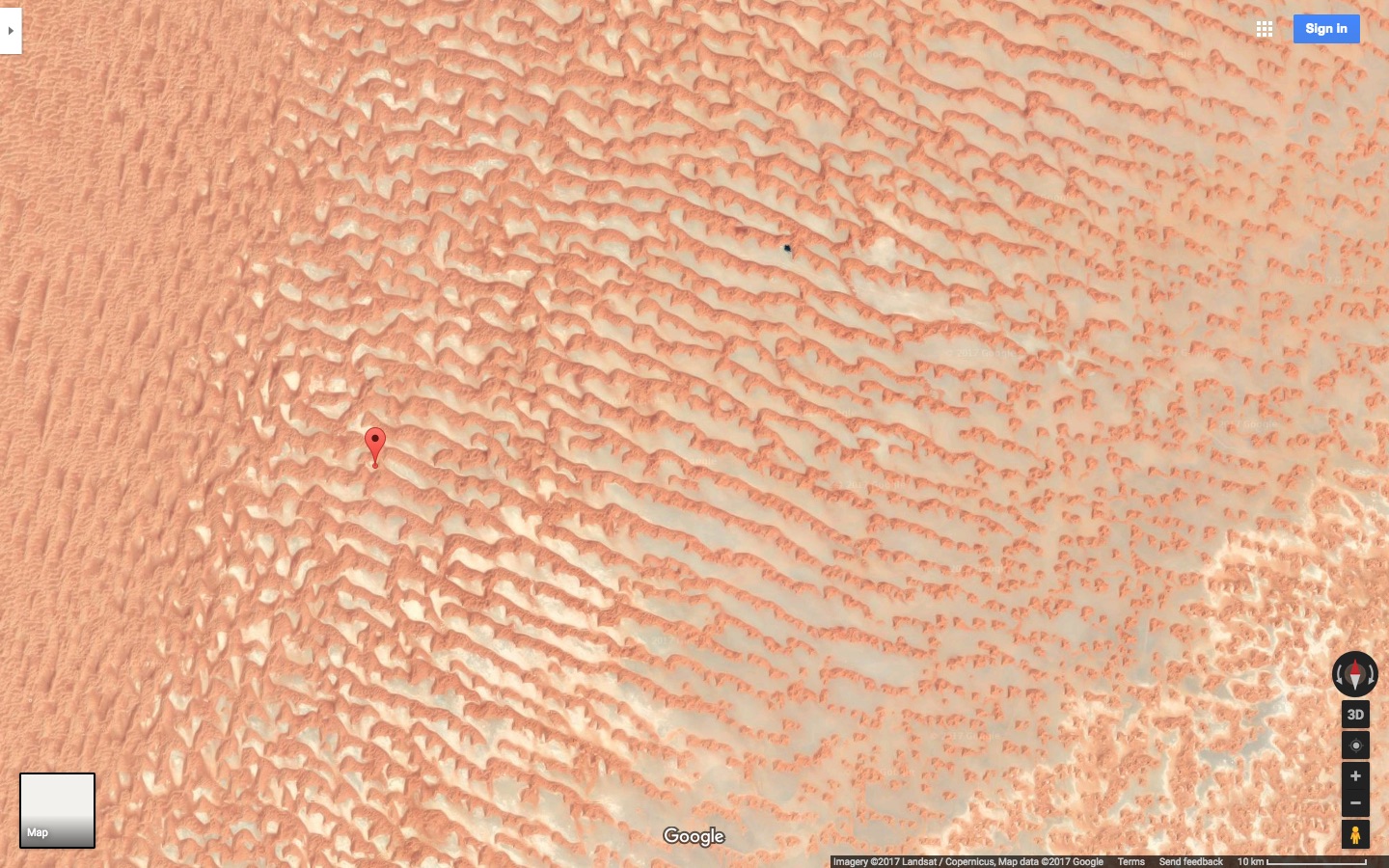 This a great example of "self-organization" in a geomorphological system; this one an oscillating system at a fairly large scale. On a much smaller scale, you find similar structures on sand dune surfaces themselves as well as dry dusty dirt roads: 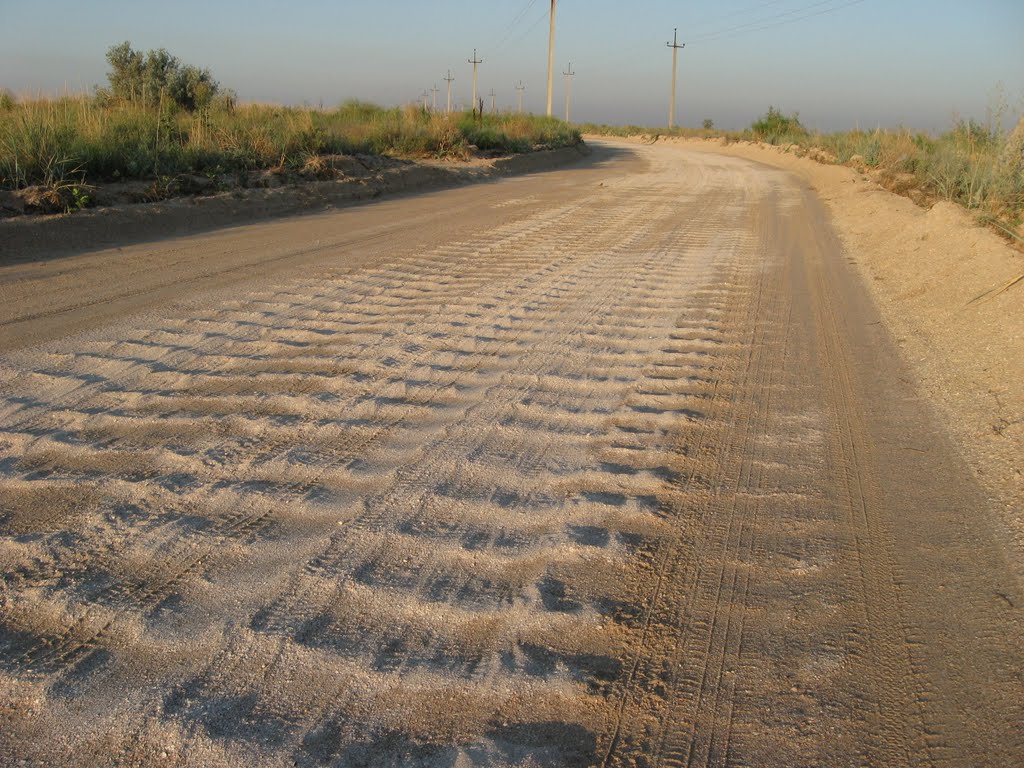 Self organization (and its scaling) is a complex process delicately dependent on just a few variables, in the case of desert dunes, wind carrying capacity, and critically, bed surface. (You can also find examples of oscillating chemical self organization in rocks when, for example, you see "tree-rings" around plagioclase crystals in anorthosites.)

The hidden (and surprising) complexity of self organization in natural systems is reflected in the difficulty in modelling these behaviors. In the case of small sand dunes:

...a complex process of ripple coalescence is responsible for this evolution of the ripple field. Small, fast-moving ripples catch up with and are absorbed by larger, slower forms, each such merger resulting in a growth of the mean wavelength and a decline in the relative dispersion of the wavelengths.

This mechanism may figure in modelling the formation of large dune fields:

Because dunes reorient only at their crest terminations with a change in wind regime, the rate of formation of a new pattern of small dunes is typically faster than the rate of reorientation of the existing pattern, resulting in the superposition of simple patterns to give rise to complex patterns. Complex patterns are distinct from spatial changes in a simple pattern, and from the type of superposition that characterizes compound/complex dunes.

There are literally tons of examples of self organization in earth systems, at all kinds of scales, but that NASA image is a stunner!

NASA has just published (16 June 2018) a similar picture on its Earth Observatory website.

The pictures in the question were taken after Tropical Cyclone Mekunu passed over the region in May 2018.

Not the answer you're looking for? Browse other questions tagged geography geomorphology satellites or ask your own question.

14
What are these lake-like blue patches in the desert, visible in satellite image?

14
What are these lake-like blue patches in the desert, visible in satellite image?
4
Is it possible to infer the depth of a river from the shapes of the islands and the banks?
2
What are these features in the Tombouctou Region?