What is the steepest surface that can hold snow?

I know it depends on the type of snow (dry or wet) and the rougness of the surface. I'm looking for an approximate rule of thumb answer. Assuming a reasonably smooth surface, at what angle it's likely to be free from snow?

Google results only discuss snow and slopes in context of skiing and roofs not caving in. Obviously, a snow safe roof (60+ degrees) will still accumulate a few inches of snow.

For example, imagine a sandwitch board sign. What's the minimum "uprightness" for it to not get obscured by snow and stay readable throughout the year?

Recalculating for the high bound friction coefficient ($1.76$), results in the snow not even falling off if the surface were vertical.

I think you already pointed out the biggest problem: any estimate is heavily dependent on the contact surface, type of snow and other conditions (temperature, wind, etc.). I haven't done a thorough looking around, but from the friction coefficients listed in this one article, I can only guess that you'll have a wide variety of ranges, making a rule of thumb difficult.

What's the minimum "uprightness" for it to not get obscured by snow and stay readable throughout the year?

The answer to this problem is not in the angle at all. No amount of math will give you an angle at which you can reasonably presume your surface will remain clear. Snow can (and does) accumulate on vertical and even negatively sloped surfaces. Instead of thinking about the angle, you should be thinking about the materials and conditions involved. 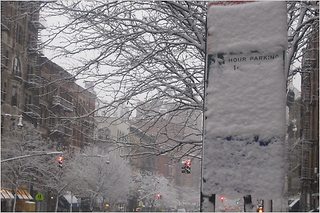 There are lots of factors that determine whether snow will stick, but a few that stand out most are:

To effectively keep a surface clear it should be ① smooth, ② quickly transfer heat to adapt to the current air temperature, and ③ be sheltered from being in contact with falling snow in the first place. Even highway signs with are smooth, vertical and thin metal are only so effective at staying clear and in some regions will have eaves protecting them from some snowfall.

Not the answer you're looking for? Browse other questions tagged meteorology atmosphere snow or ask your own question.

11
What does the term “Snow Interval” mean?
14
What is the lowest latitude at which snow has been recorded at sea level?
5
Snow thunderstorms
2
What's the difference between snow cover and fractional snow cover?
5
'River-effect' snow
2
Does the snow come from local moisture or transported moisture?