What are the most similar Earth analogues to Mars' seasonally recurring slope linea?

Recurring Slope Lineae (RSL) on Mars are suggested to be water that seasonally melts from underground ice and sublimates through the sand and dust to darken the surface. Slowly flowing downhill to form the lines.

I'm not sure it has been determined that it is water and not CO2. But assuming that it is water (brine), what are the nearest analogues on Earth to a Martian RSL environment? Are there any RSL's on Earth? What kind of life thrives in them?

Here is a brief video of how they change seasonally.

Analogues to Mars Recurring Slope Linea (RSL) is a current study topic in Antarctica (Dry Valleys). On Earth, analogues are known as water tracks, which are linear zones of higher moisture along slopes in polar regions where water transit during snowmelt. This figure from Ward Hunt Island (NU, Canada) show well developed and typical water tracks. 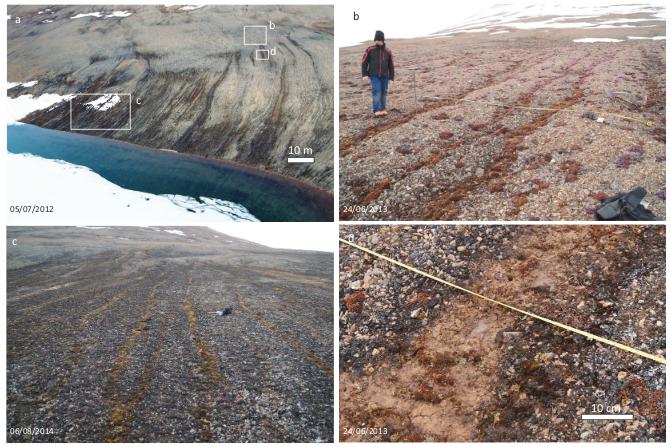 On Earth, as shown on this picture from Ward Hunt Island, water tracks are from snowmelt and thus not from brine, unlike in Antarctica where brine water as runoff is common.

Water tracks share many morphological and seasonal characteristics with RSL, including downslope propagation of linear or branching patterns of surface darkening, growth during spring/summer seasons, and fading during winter

This mean that this Antarctica analogue to Mars RSL have several sources of water (meltwater, shallow ground ice and atmospheric water vapor deliquescence).

Comparatively, on Mars, source for the RSL have been hypothesized to originate from snow melting, deliquescence, dry flow or shallow groundwater. And more recently, from deep aquifers through fractures (impact, tectonic) such as shown in this study at Palikir Crater inside Newton Crater Basin and Triolet Crater.

Nevertheless, there is entire sessions at the Lunar and Planetary Science Conference dedicated at Martian Brines (MARTIAN BRINES: OLD SALTS AND NEW VIEWS) and RSL or actual slope processes (THING FALL DOWN GO BOOM: MARS DOWNSLOPE MOTION). While models are getting better and more elaborated, there is still opposing views and this dynamic field of study is moving very rapidly.

Finally, life found in brine on earth are halophiles, a type of extremophiles - but this is a whole topic in itself.

Not the answer you're looking for? Browse other questions tagged seasons mars astrobiology underground-water or ask your own question.

12
What are the ramifications to life on Earth when the Earth's magnetic poles switch?
13
Is Mars' mantle homogeneous or heterogeneous and what might this say about mantle convection?
13
Why does Mars' experience an 'ice age' at high axis obliquity, when Earth experiences an ice age at low axis obliquity
15
What is this strange feature on Mars in Valles Marineris
11
Carbon dioxide on Mars, Venus and Earth
5
What is serpentinization, in the context of disappearance of surface water on Mars?
11
Water on Mars and Earth
6
What could be causing microseisms on Mars?
6
Considering the thin piece of material on the surface of Mars in the image below, is there anything like it on Earth?