Yilmaz (2016) briefly explains - along with a nice accompanied image/diagram - the main categories of seismic inversion. He claims there are four: travel-time, waveform, hybrid, and join inversion. Now, I have heard the phrase "amplitude inversion," too.

Here is the figure in question: 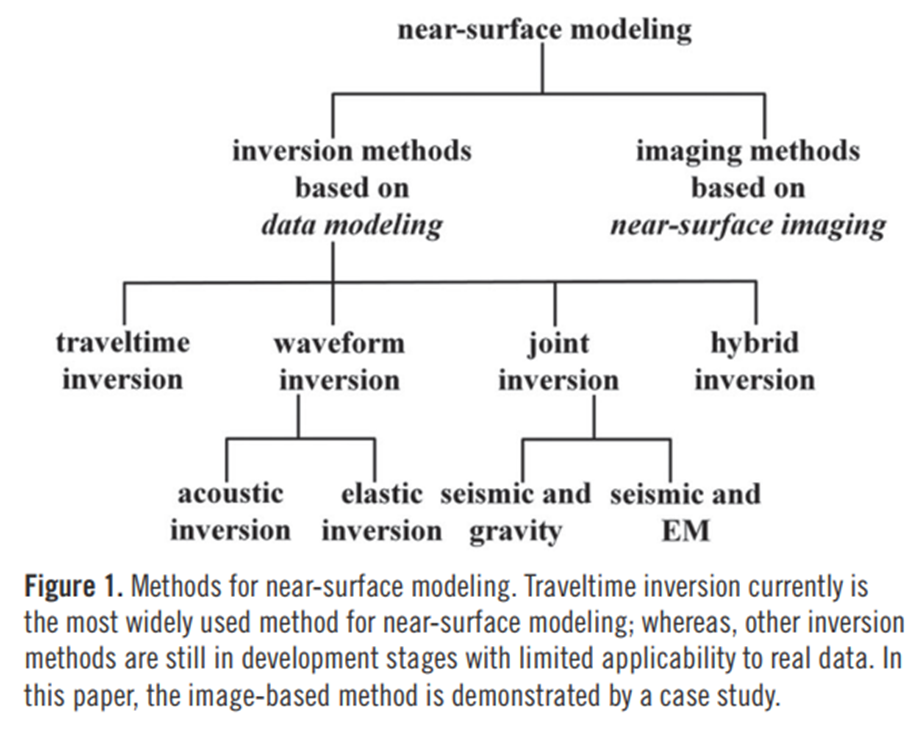 "Traveltime inversion" is a very broad category that includes any inverse problem where the input data is a time-delay from a seismic source impulse to when it is received at a seismometer. This includes refraction tomography, reflection tomography, and most implementations of full-waveform inversion (i.e. using diving waves). The output (i.e. what you are solving for) here is a velocity model that best explains all time-delay data simultaneously given the known physics of wave propagation.

"Waveform inversion" is the category that includes all post-migration reflection seismic inverse problems where the input is a single trace or an offset gather (constant X,Y for all input reflections). The output in these are the vertically-varying elastic properties (acoustic impedance, vp/vs, density, etc) that best explain the observed seismic trace/gather (i.e. waveform) given the physics of seismic reflection. This is commonly called "amplitude inversion" because amplitude is one of the main inputs here (although phase and frequency are involved as well).

"Hybrid inversion" is what Yilmaz is calling the recent methods that try to use both the seismic time-delays and ampltidues/waveforms to solve for the best elastic property model that simultaneously explain both types of observations. He cites some recent examples in that paper. The first one I saw on this was Misra and Sacchi (2008). The problem with this stuff is that things become highly nonlinear and therefore require global optimization techniques which are way slower.

"Joint inversion" is just combining different types of geophysical data. For example, let's say you are trying to map the 3D structure of a salt dome. You can use 3D seismic reflection data to map the top of a salt dome easily, but the base is usually really tough due to imaging problems below the salt. Gravity data only gives you the cumulative response of the entire 3D structure below so many salt dome shapes could give you the same gravity response. However, you can use the seismic data to map the top of the salt, then the gravity data to constrain the base, then use that model to re-migrate the seismic data and you should have a good top and base of salt. Similarly, you could pose the problem as a joint-inverse problem where you are looking for the best 3D structural model that simultaneously properly migrates the seismic data and also explains the gravity response.