Does the elliptical orbit of the Earth have effect on Earth's climate?

I know the Earth is nearest to Sun during the summers of the southern hemisphere. Does the orbit affect the climate actually? For example, would there be any difference if the Earth had a perfectly circular orbit?

Overall the eccentricity variation doesn't change how much solar energy hits the Earth by much, so it's not the total solar energy. It's when combined with precession, and the effect on the seasons, that the global effect can be significant.

If we had a perfectly circular obit then the only Milankovich cycle that would matter would be axial tilt. Ice ages would either be on a 41,000 year cycle - very neat and tidy, or they wouldn't happen at all cause the orbital variation wouldn't be enough to get ice ages started. Other factors, like solar minimums could play a role and over longer periods of time, continental drift and variations in plant life, so, maybe not that exactly that, but I think it's likely.

Too long answer: Hotter summers and colder winters (or the opposite) is a form of climate change that accompanies the orbital cycles. All the orbital cycles change climate at least by seasonally. But if I'm reading your question right, you're asking about global temperature, not just seasonal variation.

Eccentricity has an effect because the two hemispheres are quite different and because it amplifies the effect of precession.

Oceans tend to be a temperature buffer. They circulate and they warm up slowly and they cool down slowly so they don't get too hot in summer or too cold in winter. Land can vary in temperature significantly more. This buffering can be seen in this average temperature chart of the two hemispheres. 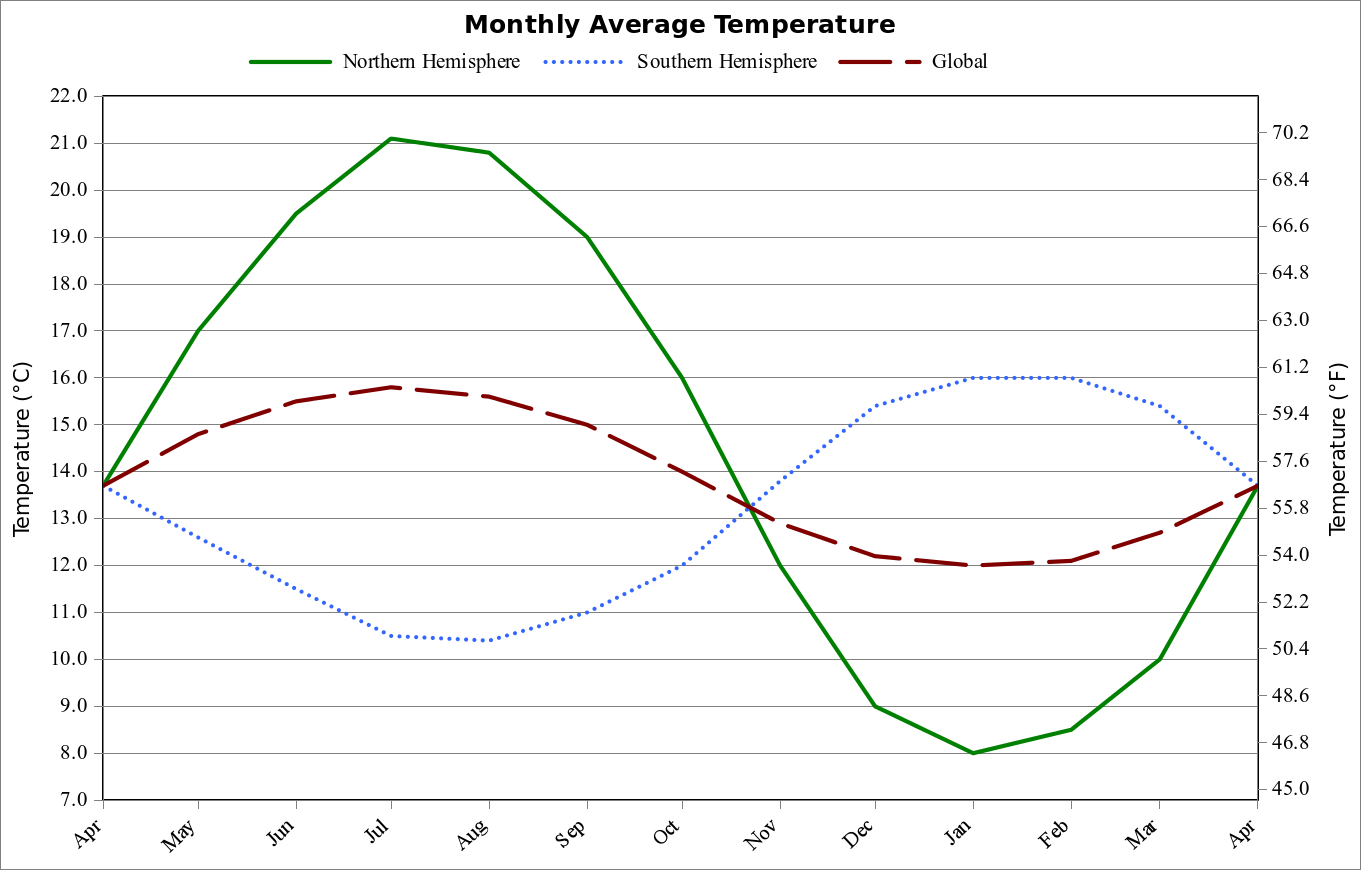 With that in mind we can ignore the smaller variation in the Southern Hemisphere and just look at the Northern Hemisphere variation for any orbataly driven climate effects. Before we get into eccentricity, it's important to understand Axial Precession. The Earth, as you noted, is closest to the Sun in early January, January 4th this year. that 3.4% closer That means Earth gets nearly 7% more sunlight in the first week of January than it gets in the first week of June. That 7% is too small to move the seasons, but it's enough to affect them a bit. Earth overall gets more solar energy January (Northern Hemisphere Winter) and less solar energy in June. The Northern Hemisphere's more exteme seasonal variaiton comes into play when the Earth is closest to the Sun in May-June-July-August - that should happen in about 8,000 years, give or take. The cycle averages about every 23,000 years, so roughly 11,500 years between highs and lows for each hemisphere.

The most relevant factor is the Northern Hemisphere Summer. This is what is thought to drive ice ages back and forth. Snow can last on land a long time in higher Northern latitudes and when the summers are less hot, the snow can last well into May, June, even all year around. The warmer winters are less of a factor cause you still get snow in warm winters, sometimes, it snows more heavily when the winter is warmer. It's the cooler Northern Hemisphere Summers that allow snow build-up and make ice ages possible. Eccentricity (combined with precession) plays a key role on the periodic, colder Northern Hemisphere summer.

Don't worry, we're not entering an ice age in a few thousand years. We're actually in a cool Northern Hemisphere summer period now, but, It's not quite that automatic.

The eccentricity in effect, determines how significant the axial precession is. When the orbit is nearly circular, the difference in energy perihelion to aphelion is virtually zero. Orbital eccentricity is currently dropping, moving towards circular, so we're not in a period of expected significant changes. (The increased CO2 would prevent an ice age now anyway, but that's another story). Earth's orbital cycles are in more of a holding pattern than moving towards an ice age.

In laymans terms, think of the eccentricity as turning up or down the effect of axial precession and those two combined, when properly lined up with the hemispheres, have a significant effect.

The 3 cycles together, make a kind of ugly chart of ups and downs. The orbital effect is rather uneven but Ice ages are often periodic because of feedback mechanisms on Earth. Once formed, Glaciers are hard to melt and once melted, it takes peak conditions to get them forming again, so many of the smaller ups and downs in the chart don't drive ice ages, only the extremes.

Wikipedia has a nice graph on the Northern Hemisphere solar energy at summer solstice. When the chart is high, that tends to be a period of glacial melt. When it's low, that's a period of ice age formation.

Because the eccentricity is currently kind of low and shrinking, we're probably not due for an ice-age for about 50,000 years, at least according to current orbital models, per Wikipedia (same link as just above).

Yes, but this is not mainly due to the small intensity variation of sunlight with distance. Rather, the elliptical orbit affects the length of the seasons, which — along with other orbital effects — triggers the ice ages.

The distance of earth to sun is proportional to the intensity of sunlight we receive. The distances between perihelion and aphelion are quite small, so the differences in sunlight intensities are too - wiki.

If the alternative circular orbit would be the average radius of the current ellipse then northern hemisphere summers would have slightly more intense sunlight, hotter, and and vice versa for the southern hemisphere, cooler (less UV).

Not the answer you're looking for? Browse other questions tagged climate orbit or ask your own question.

16
How does the precession of the Earth's apses affect climate?
13
Are ice-ages dependent on an un-equal distribution of land-masses?
17
Why does the Inter tropical Convergence Zone shift?
13
Climate on an Earth without an Axial Tilt
10
Does the Sun's oscillation affect Earth's climate?
6
Why do winter temperatures account for most of the increase in global temperature?
1
Earth's orbit and historical sun-earth distance
4
Every 202,500 years, Earth wanders in a new direction; does it affect climate?
1
Is the effect of Earths position relative to sun large or small compared to CO2 level in climate change?