What is it called when water forms to look like a root structure? [closed]

I've tried looking it up on google but I can't find anything. I'm talking about when a small amount of water forms to look like a root hair structure, thin and branching out.

The term you are looking for is Dendritic, it literally means "having a branched form resembling a tree" and is used to describe the shape of rivers but can also apply to anything with that pattern. 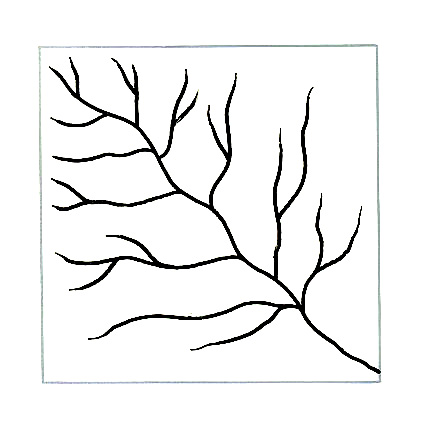 Given that you are talking about something small and root-hair like there are no such examples occurring with water in the liquid phase.

It's more likely you saw ice. In science jargon, what you're referring to are known as fractal structures. Below the pictures, I explain why water in the liquid phase can not produce the specific type of fractal structures you're asking about.

If the photos below are not even close to what you were thinking of, and you're sure it wasn't ice, then you probably saw something that wasn't water (for example a clear mold). In response to comments, it's worth clarifying why small amounts of water cannot form static fractal structures. Water has strong surface tension resulting from the polarity of individual $H_2O$ molecules. Surface tension is the reason water beads up to form smooth edges, which is precisely the opposite condition of fractal structures. There are examples (like the structure left behind as water drips down a window) of limited branching with water, but the branching is physically limited by surface tension that forces smaller nearby water to coalesce with the larger structures. For fractal branching to be significant, you must have more than just a primary and secondary branching. That is to say, no scientist would consider something to be a fractal if it occurs over less than an order of magnitude.

Rivers are a different story. Stream networks are fractal by several different measures. However, in line with the details of the question it's important to note the poster asked about water forming a root like structure. The fractality of river networks is a pattern embedded within the earths surface, yes by the action of water, but water alone is not responsible for the network structure. To oversimplify, it's a sediment transport phenomenon, the flow is multi-phase (water + sediment), and therefore this is not just a water-only phenomenon.

Not the answer you're looking for? Browse other questions tagged water terminology or ask your own question.

18
What is the difference between eluvium and alluvium?
13
Where does the water from rain in rain forests come from?
10
Does this optical phenomenon have a name?
1
What is the cause of temporary smell and black color of underground water?
1
Self-sustaining aquarium in a jar?
6
Why should there not be water deep (e.g. below 6 kms) in the Earth's crust?