How do Rossby Waves in the ocean form?

But what about in the ocean, where we don't see such inhomogeneities? How is the formation and movement of Rossby Waves in ocean different from that of land?

Rossby waves are common in the ocean. They propagate along lines of latitude with the waves traveling along the Equator being the most obvious example and the most thoroughly studied. As in the case of atmospheric Rossby waves, their formation and propagation is related to the conservation of (potential) vorticity (rotational movement, angular momentum). A parcel of water has two sources of vorticity: its own spin and the planetary spin. When a parcel of water moves across a latitudinal line, its planetary spin (planetary vorticity) changes (as the Coriolis effect is latitudinally dependent) and, in order to conserve vorticity, it changes its own spin (relative vorticity). The water parcel tends to swing back and forth around the original latitude resulting in a wave-like motion. A Rossby wave is characterized by a westward phase velocity (that of the wave crests).

To add to the excellent answer by aretxabaleta:

This is what happens for eastward flow over a step change in depth. Note that the wavy pattern is seen from above, and it veers right due to the step and the conservation of potential vorticity (and the fact it is in the Northern Hemisphere). Similar to a particle displaced from its equilibrium in a buoyancy field, the particle veers right towards the latitude that is its new equilibrium point. However, due to its momentum it overshoots the equilibrium latitude. When it returns, the same happens and so on forever (in linear terms), thus giving origin to the wave. 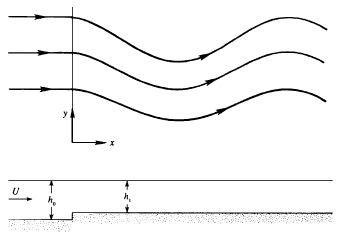 16
Why does the El Niño Stop?
12
Relation between direction of shear and tropical cyclone formation

19
What was the ocean circulation like during the time of Pangaea?
15
Is there a way to find the direction to land in the middle of an ocean?
11
What efforts have been made to separate the microseismic events related to wind-related ocean waves from the components of volcanic origin?
3
Detecting seismic waves using Software Defined Radio
7
How will climate change affect planetary waves?
2
Any site for monitoring equatorial oceanic waves?
8
How did the Ural mountains form?
9
Carbon's role in ocean acidification
14
Why are there waves in seas towards shore - even in night?
2
Can a planet be heated by the green house effect to a temperature higher than that created by its incident and net absorbed, peak external radiation?