Depth of the wind-induced currents and the shoreline

In the open sea the speed of the current in the developed sea can be estimated as 3% the wind velocity at 10 meters.

Why is ocean surface velocity around 3% of wind velocity?

Is there a similar estimation for the depth of such a current?

Having a wind-induced surface current directed towards the shoreline, how close to the shore can such current continue, depending on the steepness of the seabed, the wind and the wave conditions?

First, a bit of background, following the Navier-Stokes equations and assuming steady state conditions, we can obtain a simplified balance known as Ekman balance for the boundary layer of the upper ocean (order hundred meters). In this part of the ocean horizontal gradients are small compared to vertical gradients. Under these conditions, there is a balance between Coriolis, and friction (sometimes the pressure gradient force needs to also be considered in the balance).

The resulting theoretical flow has a vertical structure with decreasing magnitude with depth and flow direction progressively rotating to the right (left in the southern hemisphere) as depth is increasing. This is known as the Ekman spiral. 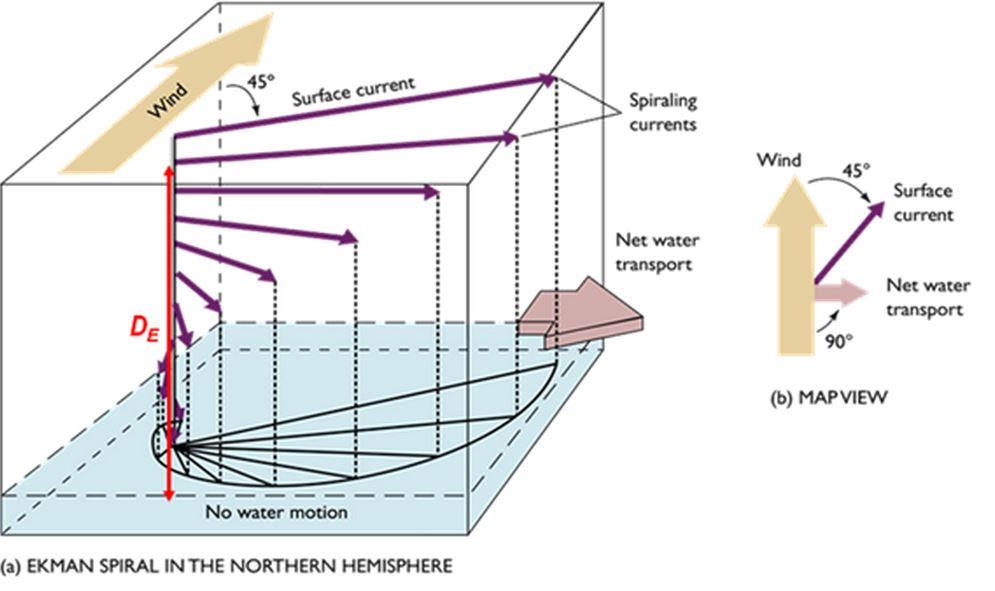 Under these conditions, in the open ocean (in fact assuming an infinitely deep ocean), the transport in the Ekman layer is perpendicular to the wind direction. The depth of the Ekman layer, or Ekman depth, is simply dependent on Coriolis and viscosity: $$D_e = \sqrt{2K_m\over f}$$ where $K_m$ is the kinematic turbulent viscosity (assumed constant) and $f$ is the Coriolis parameter (a typical value for mid-latitudes is $10^{-4}$ $s^{-1}$). Typical Ekman depths are of order 10 to 30 meters. Typical values for $K_m$ are around $0.1$ $m^2/s$ (not to be confused with molecular viscosity that is around $10^{-6}$ $m^2/s$) but can vary by several orders of magnitude, resulting in a range of $D_e$ of $10-150m$. A good explanation of Ekman balance and much more information can be found in Cushman-Roisin & Beckers (Chapter 8).

While all that is useful in a theoretical setting, the depths obtained from observations of the Ekman depth can be approximated by the expression: $$D_e = 0.4\sqrt{\tau\over f^2 \rho_0 }$$ where $\tau$ is the wind stress magnitude and $\rho_0$ is water density. The factor $0.4$ has been derived empirically and can varied slightly under different oceanic conditions.

Taking 10 meters (one of the smallest values in mid-latitudes) for the surface and bottom boundary layer thicknesses, that implies that in water depths shallower than 20 m the two boundary layers overlap. In water depths shallower than that, the transport in the surface layer is no longer perpendicular to the wind direction. The momentum input into the water by the wind (wind stress) is affected by the presence of the bottom and it is directly dissipated by bottom friction. The mixing by the wind (and wave breaking near the surf zone) results in additional mixing through the water column and facilitating well-mixed water columns. Under these conditions the wind-induced currents extend all the way to the bottom with the direction of the flow being a function of bottom depth, wind direction, and bottom slope. The presence of wind-induced currents does not preclude the occurrence of flow in the opposite direction of the wind.

A fantastic article summarizing the different flow conditions under different wind and wave fields in shallow water depths is given in Lentz and Fewings (2012). (Reprint)

Additional factors to consider are:

Not the answer you're looking for? Browse other questions tagged ocean oceanography wind waves ocean-currents or ask your own question.

12
Why is ocean surface velocity around 3% of wind velocity?
6
Can strong winds significantly lower ocean surface levels, or is it really the static pressure differences?

14
What causes waves to form the characteristic “breaking” shape as they approach the shoreline?
11
What causes these odd-looking currents in the Tasman Sea?
3
What is the average depth of the ocean?
5
Is the gulf stream both a wind-driven current and part of thermohaline circulation?
3
Land's effect on winds and currents?
6
Are there probably decent oil fields located in the middle of the ocean?
12
What is the (average) velocity of ocean currents?
1
Where can I find wave height/period, current velocity and wind speed/direction data at the Qiangzhou strait in China?
0
Is it possible to get trapped in a circle of water in a rip current?
14
Why are there waves in seas towards shore - even in night?