Are Earth´s interannual global climate variations affected by other bodies in the solar system and their evolution?

Are fluctuations like El Niño and La Niña entirely independent of outside influences such as the gravitational effects from other planets, variation in solar output, etc?

There's probably very little effect, but "entirely independent" is another matter entirely. There might be some small effect on a year to year, or, for sake of argument, 12 year orbital period of Jupiter.

The precise cause and predictability of (El Nino/La Nina and Neutral), or, lets call it ENSO remains inexact and it's at best, a complex combination of causes and feedbacks. I'm not precisely sure if it's simply complicate or there are still some unknowns that make any kind of longer term prediction very difficult. I suspect there's still some unknowns and uncertainty in the longer term causes of ENSO. This is a pay article, in the summary it says.

The immediate cause for ENSO seems to be weakening or strengthening of easterly, equatorial, Pacific trade winds. This makes El Ninos, La Nina's or "Neutral" predictable up to several months in advance but they remain very hard to predict further out than that.

and while I generally hate the website, Wattsupwiththat, if you ignore their climate model discussion, their trade wind article is pretty good and the picture below gives a good summary of why trade winds control Pacific surface temperature. 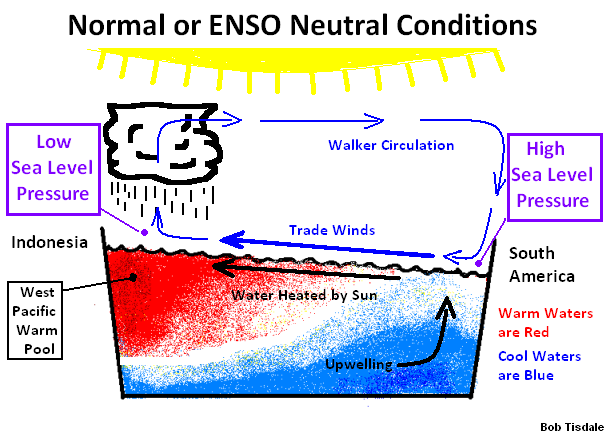 Also, just to clarify "Easterly" winds blow West. The term means the winds come from the East, just as Northerly winds blow south. That's why the diagram has easterly's blowing towards Indonesia.

The next logical question is, what causes trade winds to weaken and strengthen and as noted above, that's complicated. This article says the El Ninos occur every 2 to 7 years, which, while generally cyclical, is a pretty irregular period. 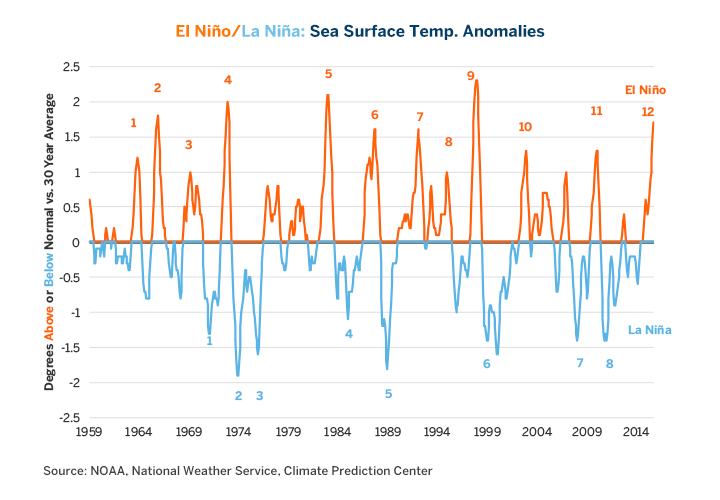 And This article describes the cycle as "flipping and flopping"

Wikipedia touches on the cause of trade winds, but not on the precise mechanisms which strengthen or weaken them. If the planets, presumably Jupiter being the primary one, has a significant effect, then it's 12 year orbital period should be have a detectable effect and I've never read anything to suggest that it does.

Earth, relative to the sun, is basically in the same position every season. Jupiter moves more slowly, so for practical purposes it can be viewed as relatively stationary. When the Earth is behind Jupiter, it moves through it's orbit a little faster. When it's ahead of Jupiter, it slows down a little bit. Also, Jupiter has a tidal effect, where, Earth's orbit stretches in the direction of Jupiter. These kinds of changes in orbital speed were observed in Uranus and lead to the discovery of the planet Neptune. For similar reasons, Jupiter does have an effect on Earth's orbit depending on which side of the solar system it's on, but the effect is small.

I'll skip the math cause I don't do it well enough and it would get long and ugly, but a rough calculation puts an upper limit of the Jupiter effect on Earth's climate as 1/20th of 1% of solar radiation over a few years and then a return in the other direction a few years later, and that's peak season variation, not over a full year. If winter gets 1/20th of 1% less radiation from the sun, or Summer, 1/20th of more is 1/20th of 1% colder might have a small effect, but not a big one. That's less than the TSI variation of the sunspot cycle which peaks at about 1/10th of 1% and lasts longer.

I've never heard it argued that Sunspots drive the ENSO cycle, though there is probably some small effect with that too.

Of-course, over much longer periods, Jupiter and to a lesser extent, Saturn likely do effect Earth's ENSO cycle, because Jupiter and Saturn drive Earth's Milankovich cycles, but those happen over periods of 20,000 years and up. I don't see any way that the 12 year Jupiter orbit has anything more than a very tiny effect.

Not the answer you're looking for? Browse other questions tagged climate-change climate or ask your own question.

16
How does the precession of the Earth's apses affect climate?
8
Does the climate have any effect on plate tectonics?
4
Confirmation of historical El Niño events
9
Carbon's role in ocean acidification
1
Is the effect of Earths position relative to sun large or small compared to CO2 level in climate change?
4
How are CO2 emission effects and high altitude effects of air travel compared to each other?
3
What types of high-level mathematics are useful in doing climate modelling/meteorology?
5
Why are most effects of the predicted climate change negative?