Is the Mauna Loa CO$_\mathsf{2}$ record affected by the nearby mantle plume?

How is it possible that Mauna Loa Observatory is the International Reference Observatory for CO2 Global Measurements if it is placed above the most important earth thermal plume that is heating the ocean all the year? How reliable can these data be? Is it due to the 3000 m altitude of the Observatory? Does not affect the geological Hawaiian situation?

I don’t know that it is ‘the International Reference Observatory’. The Mauna Loa record is almost certainly the most-cited decadal-scale CO2 record, but as far as I know the observatory hasn't been accorded any special status: the record is used on its own merits. Googling for the phrase ‘International Reference Observatory’ gave me precisely one hit, which strongly suggests that it's not a well-defined term. The hit comes from Roussel-Debet et al. (2006), and appears in the following context:

Note the lack of capitalization. I don’t think that this implies the existence of a single, officially defined ‘International Reference Observatory’ at Mauna Loa. Rather, it's like writing ‘the solar observatory at Mauna Loa’: there are many solar observatories, and this clarifies which one we're talking about. Similarly, there are several observatories which produce internationally used CO2 data, and this specifies which one we’re talking about here.

if it is placed above the most important earth thermal plume that is heating the ocean all the year?

It’s true that there is a posited mantle plume below Hawaii, so it seems likely that there might be increased thermal heat flux at the sea-floor. (Incidentally, I’m not sure what would make this mantle plume ‘the most important’, or even how one would quantify the importance of a mantle plume.) However, Von Herzen et al. (1989) found that

… even though there is a small increase in heat flow with age along the swell, when compared with the off-swell heat flux, the anomalous heat flow associated with the Hawaiian Swell is probably of the order of 5–10 mW m−2 and arguably may not exist at all.

But more to the point: even if there is slightly increased heat flux here, why do you think it would affect the CO2 readings? What mechanism are you suggesting by which a small amount of conducted heat, several kilometres below sea level, is able to perturb atmospheric CO2 concentrations several kilometres above sea level?

Finally: even if there were such a mechanism, the mantle plume operates, as you point out, ‘all the year’ – year in, year out, for millenia before the Mauna Loa station even existed. So at worst it would produce a constant offset, and wouldn't affect the trend of the measured CO2 concentrations.

How reliable can these data be?

Very reliable indeed! Look at this comparison with records from Samoa, Barrow, and the South Pole. 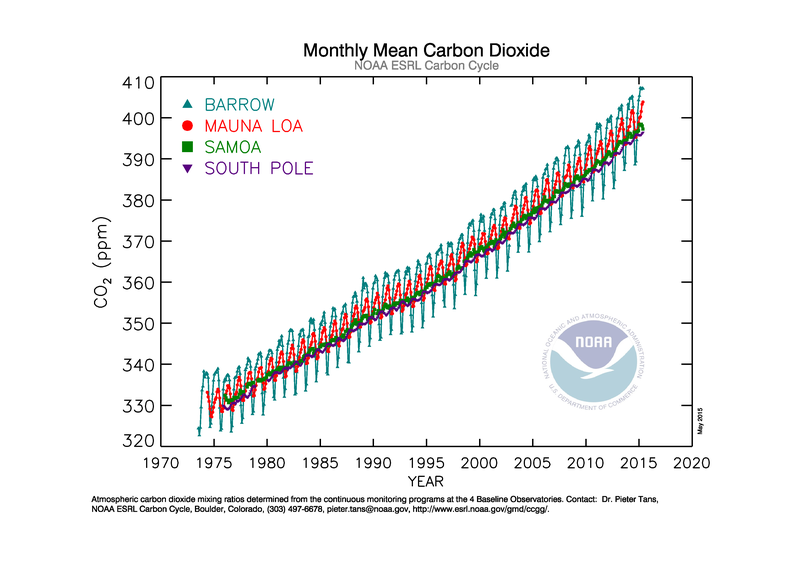 Naturally, the shape of the annual cycle varies depending on the measuring station's latitude (you can see that the South Pole record is out of phase with the northern hemisphere records, as you'd expect), but the trends are an indisputably excellent match. If there were some confounding local influence at Mauna Loa, we certainly wouldn't see it reproduced at other sites thousands of kilometres away.

Is it due to the 3000 m altitude of the Observatory?

That's certainly one factor that makes Mauna Loa an excellent site for this kind of study. This Skeptical Science page lists some others:

Early attempts to measure CO2 in the USA and Scandinavia found that the readings varied a lot due to the influence of growing plants and the exhaust from motors. Mauna Loa is ideal because it is so remote from big population centres. Also, on tropical islands at night, the prevailing winds blow from the land out to sea, which effect brings clean, well-mixed Central Pacific air from high in the atmosphere to the observatory. This removes any interference coming from the vegetation lower down on the island.

For more detail on how measurements are taken at Mauna Loa, and how the data is checked to make sure that it’s not contaminated by local influences, see this detailed NOAA page on measurement procedures. The section on ‘Data selection for background air’ is particularly relevant to your question. (Thanks to jeffronicus for providing this link in the comments.)

As to your final question:

Does not affect the geological Hawaiian situation?

I assume that you meant to write ‘Does the Hawaiian geological situation not affect the readings?’. I hope I’ve made it clear that it doesn’t, and that Mauna Loa is so widely used precisely because of the absence of local influences on the readings.

Not the answer you're looking for? Browse other questions tagged atmosphere climate-change climate co2 mantle-plumes or ask your own question.

22
What are some of the strongest theories against the existence of mantle plumes?
12
How do mantle plumes travel from the core of Earth to the crust?
16
Is Iceland an example of a hot-spot overlying a mantle plume?
1
Are Earth´s interannual global climate variations affected by other bodies in the solar system and their evolution?
6
How can linear oceanic ridges (like the East Pacific Rise) be explained by single point mantle plumes?
2
How do we allocate partial CO2 doublings for Empirical Climate Sensitivity?