What is likely to have happened with these newly discovered antarctic volcanos below the ice?

Below is a screenshot of figure 3, including a cropped subsection. If you open the figure in a new window you can view it at full size. In the subsection there are two rectangles with the word CONE above them. Below these words there are two traces. If I understand correctly, the lower trace is (for lack of better vocabulary) the surface of the Earth, and those cones have been identified as volcanos. However I believe the upper trace is the top of a layer of tephra:.

Tephra is fragmental material produced by a volcanic eruption regardless of composition, fragment size or emplacement mechanism.1

Volcanologists also refer to airborne fragments as pyroclasts. Once clasts have fallen to the ground they remain as tephra unless hot enough to fuse together into pyroclastic rock or tuff.

I'm trying to understand what might have happened here. the two cones are of the order of 10 km apart, and they extend above and below sea level. Was there an eruption below the ice which acted as a buffer and contained the ejecta? With some melting, some water below the ice could help it to flow over time and redistribute more evenly between the cones. Or would these volcanos just blow the ice away completely for an extended period of time and Southern Ocean currents could assist in the redistribution? 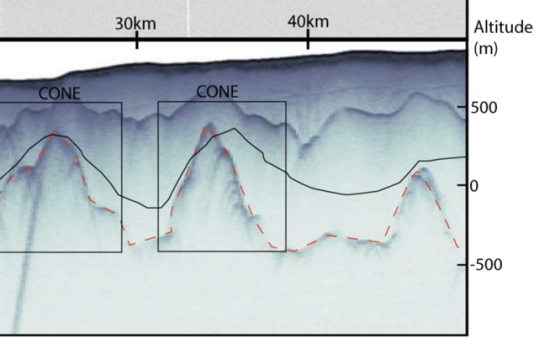 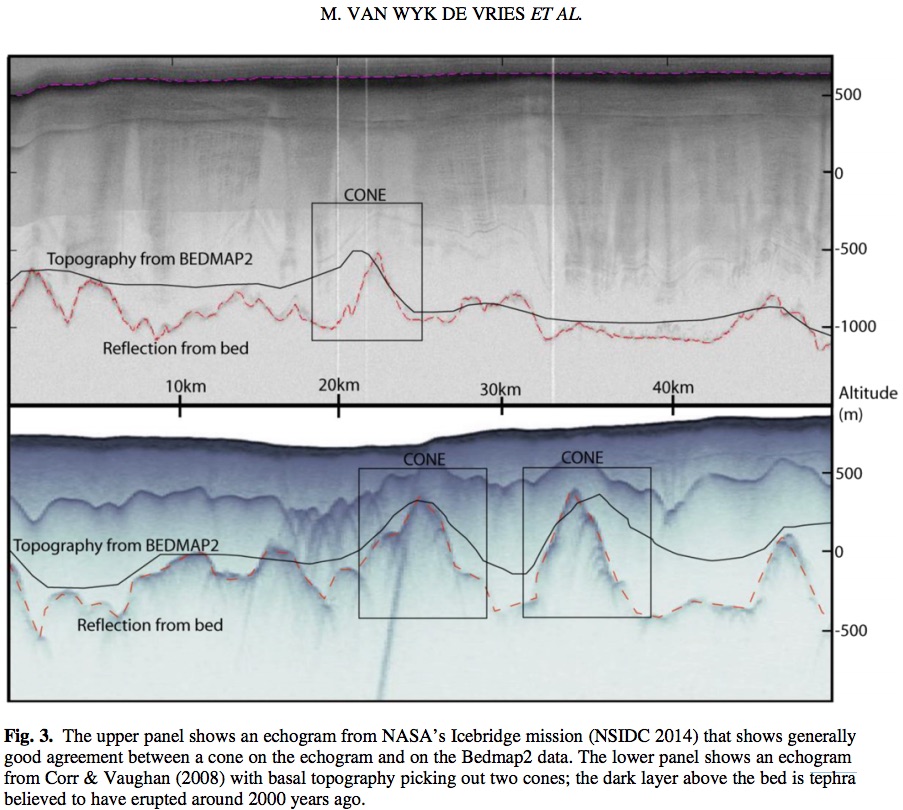 Fig. 3. (repeated here in case the original is not easily legible on your device) The upper panel shows an echogram from NASA’s Icebridge mission (NSIDC 2014) that shows generally good agreement between a cone on the echogram and on the Bedmap2 data. The lower panel shows an echogram from Corr & Vaughan (2008) with basal topography picking out two cones; the dark layer above the bed is tephra believed to have erupted around 2000 years ago.

That's a very interesting study, but only provide very rough information on the posible volcanoes that might exist under the ice. In the case of the volcanoes shown in the radargram I'll highlight some points that might be the source of your confusion:

Not the answer you're looking for? Browse other questions tagged volcanology antarctic or ask your own question.

7
How does ice-penetrating radar "see" through kilometers of ice without being absorbed?
8
The giant 6,000 km$^2$ iceberg A-68; will ground-truth telemetry supplement satellite tracking data?

9
What are these "ship wrecks" (pictured) in the old volcano crater?
12
What geophysical knowledge have we learned by the construction of IceCube?
5
Red volcanic soils - what are the likely constituents?
6
What is the source of lava of volcano? From magma below crust? Or from molten crust by rubbing?
18
Is this 70km crack in an ice shelf of Antarctica remarkable, or a regular occurrence?
7
Is the momentum of a volcano's high-velocity ejecta mostly due to expanding gas?
8
The giant 6,000 km$^2$ iceberg A-68; will ground-truth telemetry supplement satellite tracking data?
3
Simple way to understand these narrow frequency peaks in recently published "ice shelf singing"?