Has been observed any changes in the real sun´s size on ocassion of the 1979 solar storm event ? (after and before)

No, no such changes have been observed. Laclare et al. (1996) summarize various published solar diameter data from observations made between 1970 and 1995. Here's Figure 6 from their paper. 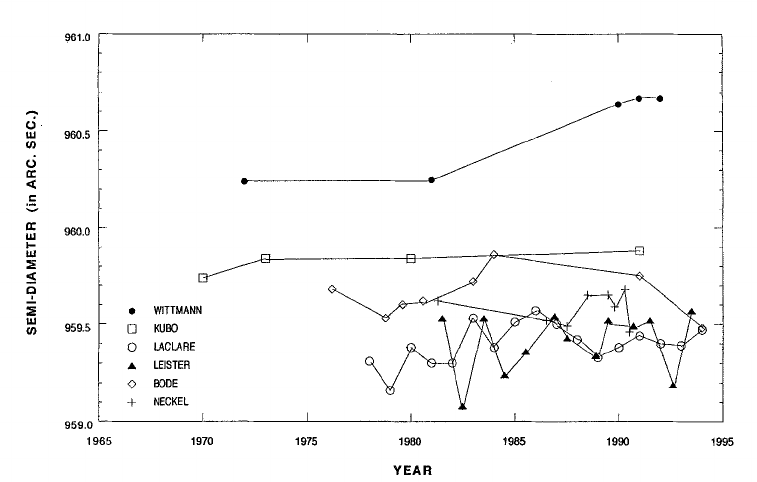 As you can see (and as Laclare et al. point out), solar semi-diameter has shown no significant variation during the measurement periods. Given their deviation from the other data sets, the Wittmann data seem rather suspect, but even they show absolutely no change between the 1972 and 1981 data points. In short, none of these data are consistent with the notion that solar diameter changed in 1979.

Not the answer you're looking for? Browse other questions tagged solar-terrestrial-physics astronomy or ask your own question.

3
How much reduction of insolation (solar energy) would be required to stop global warming?
6
Why wouldn't the earth be “always daytime” if the “daily cycle of sunlight” was drawn full-scale?
7
Would a global cooling event disable solar energy usage?
7
Why don't weather forecast models normally take solar eclipses into account?
8
Changes in Earth's orbital and rotation speeds
1
What would a graph of magnitude >7.5 earthquakes over last 400 years compared to Grand Solar Minimums look like?
1
Why do climate experts from the UN/IPCC rarely mention Grand Solar Minimum?
3
What is the lowest latitude for which if the ideal solar energy received each day for a year is graphed, the graph would contain one peak?