Since there is a total solar eclipse somewhere almost every year, I would have thought it would be included as a standard option in weather forecast models. However, I've learned that is not really the case. 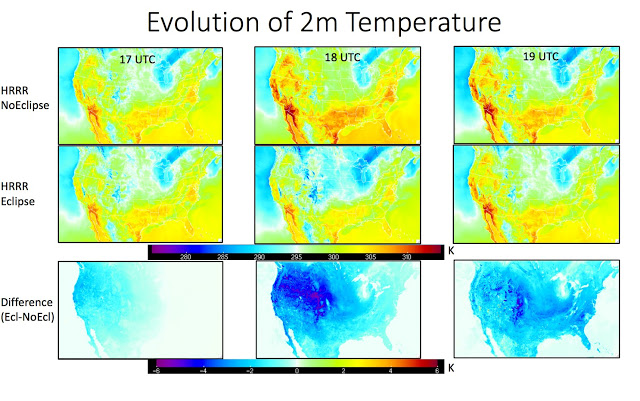 Total solar eclipses are rare. Globally, they only happen every 18 months. In any given spot, they are much, much rarer, with a recurrence period of many hundreds of years.

Solar eclipses are localised in time and space. Although model resolution may be just about small enough (in time) to resolve the totality, it only has a limited impact.

One could implement solar eclipses in weather forecast models, but there's plenty of more important things to worry about improving. Operational weather forecast models are complex beasts, so you really want to change things only if it may yield a significant improvement. The potential improvement of implementing a consideration of solar eclipses is minimal, so it's simply not worth the effort or the risk.

Experimental models are a different category and as you have seen, eclipses have been implemented in those. But the risks involved are much smaller; nobody really cares if experimental models go totally wrong, but you really don't want to be responsible for breaking the operational weather forecast model.

You might be interested in this article on The weather’s response to a solar eclipse that my colleagues wrote.

A solar eclipse, while influential, is only influential in the short term, so it is often ignored. Even then, the data assimilation methods can correct for any error after the eclipse (though that would be an interesting project). Plus there is also the complication of clouds, etc.

There are things that are ignored in weather models, but we know we ignore them. We ignore them because the are small, difficult to moddel, poorly understood, etc. Such things include aerosols, tropospheric chemistry, tornadoes, heating from lightning, anthropogenic heat flux, drag from buildings.

Perhaps part of it has to do with the fact the weather changes due to eclipses are usually fairly friendly/tame. This GOES 16 satellite loop from the southeast US during the eclipse shows a large percentage of the cumulus buildup dissipating as solar input dropped. And this great meteogram from the Oklahoma Mesonet (this site is Blackwell, Oklahoma in northern Oklahoma, though most sites show some impact) shows the slump in solar radiation very well (the bottom plot) and also temperature and wind speed changes during the early afternoon of August 21, 2017 (very slightly left of the middle of the time period of the graph): 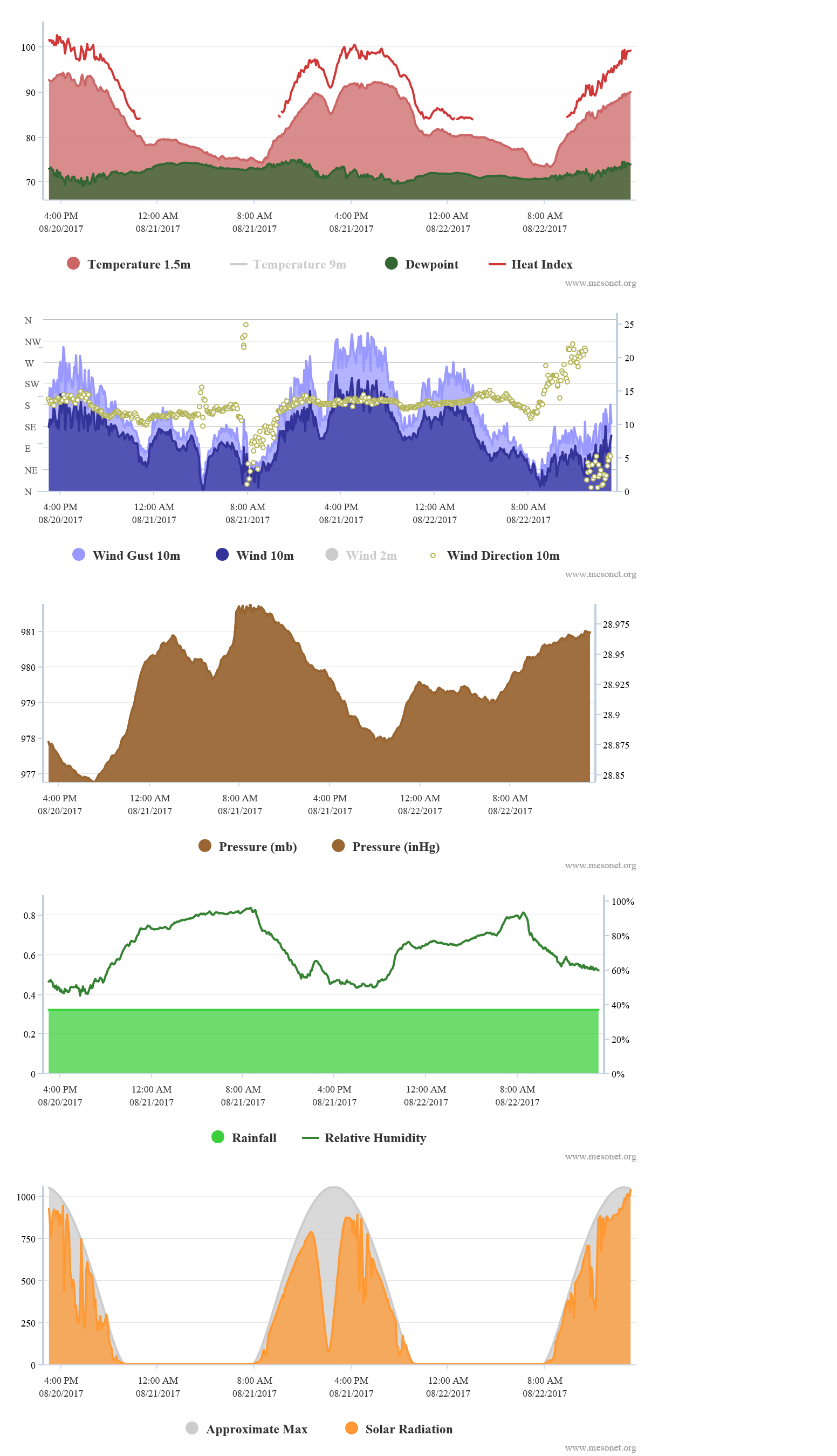 Typically changes like cooling and slackening winds are not conducive to storms, and as the graph shows, are rebound soon after the eclipse end.

It wouldn't seem it's much trouble to include the eclipse... just include a single if statement that checks a date variable holding the next eclipse time. And then, if it is the eclipse, just modify the insolation variable, probably just by the percentage of the sun's area covered up (which there's probably pretty simple equations to calculate?). Just seems most haven't really taken the time, perhaps in part because of the event rarity. Because major operational models are improved during quite regular cycles, including such a rarely-applicable feature like that may end up as more maintenance work than the benefits are worth.

There may not be much in the way of dangerous weather created during an eclipse, but that doesn't mean there is no weather. The next US eclipse in 2024 does offer more potential to be a more weather significant encounter. Most high-end severe weather in the US occurs during spring as shown with: 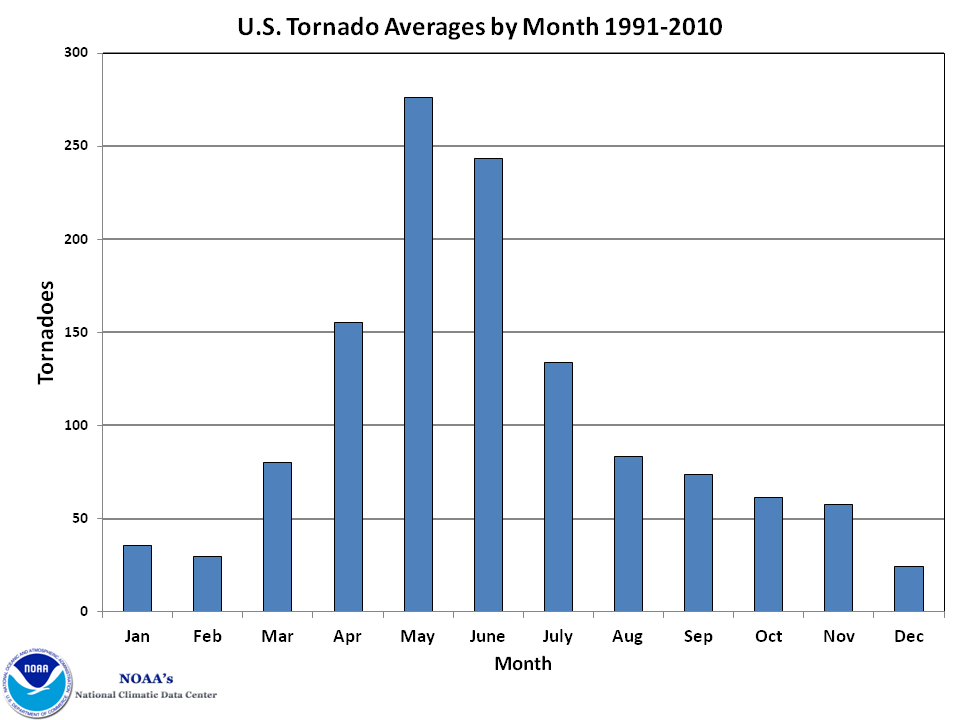 And there have been a few bouts of severe weather on April 8th, including small bursts in 2013 and 2015, plus the 1998 Alabama F5. Radiation in all of those regions will be quite heavily affected by the 2024 eclipse (coverage > 80% anywhere between Alabama and Nebraska). Would the decrease in energy disrupt severe weather potential later in the day? An interesting question we'll have to see on!

Overall there weren't large impacts during the 2017 eclipse. As mentioned, temperatures dropped for a little while, and a few clouds dissipated. But could the regional disruption of the eclipse introduce subtle wind shifts or temperature changes that alter the longterm pattern, more significantly impacting model forecasts later in time during periods of greater weather variability? An interesting question that would be great to see studied in more detail.

Not the answer you're looking for? Browse other questions tagged meteorology weather-forecasting solar-terrestrial-physics or ask your own question.

9
Can overshooting tops enter the stratosphere, or will they rather push the tropopause upward?
18
Can climate models reliably predict meteorological extremes?
11
Are weather forecast models more accurate for either high or low temperatures?
10
Has a hurricane or cyclone ever reformed after passing over a large land mass?
9
Why don't I have a 1-in-2 chance of getting rained on if the forecast says 50% probability of precipitation?
3
What is the lowest latitude for which if the ideal solar energy received each day for a year is graphed, the graph would contain one peak?
8
Where to get temperature sounding model forecast data?
5
How is weather formation prevented in the stratosphere?