why we don't have solar eclipse every month?

The moon takes about a month to orbit around the Earth. So why we don't have solar eclipse every month?

The moon's orbit is at a slight angle from the plane of earth's orbit around the sun, so it doesn't always hit the right spot, as described on NASA's Total Solar Eclipse 2017 site:

Eclipses only occur if the Moon is located within 0.5 degrees of the plane of the ecliptic, on a line that passes through the center of the Sun and the Earth. The Moon travels along an orbit that is inclined by 5 degrees to the ecliptic plane, so there are only two opportunities each month when it passes through the plane of the ecliptic. These points are called the ascending and descending nodes. Eclipses of the Sun only occur if new moon occurs when the Moon is near of one of these nodes. A similar argument explains why lunar eclipses do not occur every full moon at the node opposite the Sun from the Earth. 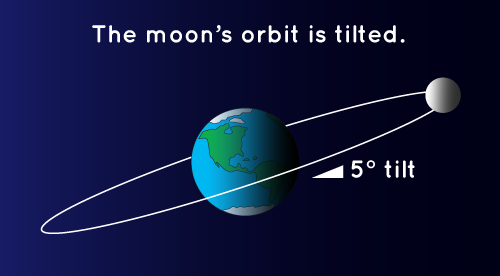 The locations where the Moon intersects the ecliptic, called nodes, change in time. It happens two times every month but only when these nodes coincide with new or full moon an eclipse will happen.

Not the answer you're looking for? Browse other questions tagged earth-rotation or ask your own question.

8
Could Earth have had a greater axial tilt?
13
Climate on an Earth without an Axial Tilt
5
Wobbly Tire Theory — Is there an existing theory that fits the following description?
19
Why clouds are not moving in NASA's video of the Moon passing in front of the Earth?
2
Flight time differences between flying east and flying west