I am trying to understand Deterministic Seismic Hazard analysis for which I believe seismic waves corresponding to a seismic sources (such as faults) are required to prepare the Gutenberg Richter curve and select an appropriate earthquake corresponding to a particular return period. However I do not know from where I can obtain the seismic data?

I am interested in the same topic. Recently, research on the determinism behind earthquake triggering has been revived based on these studies from last year:

A few years before these results were published, another seismologist did an extensive evaluation:

"Characteristics of the earthquake-triggering pattern by Earth tides were studied utilizing over five hundred thousand events from an earthquake catalogue (NEIC-USGS) for global earthquakes with a magnitude range of 2 to 10." -- Vinayak G. Kolvankar, "Sun, Moon and Earthquakes", New Concepts in Global Tectonics Newsletter, no. 60, September, 2011.

He was able to find correlations such as this: 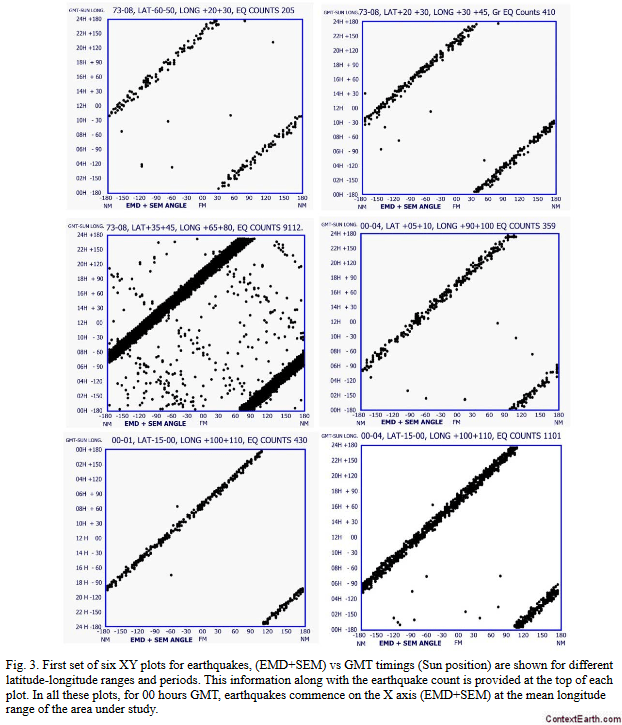 So the best bet is to look at the NEIC-USGS database. You should be able to cull from quite a few events across the intensity spectrum.

7
What is a fault?
8
Calculating the displacement of a fault
8
Nepal earthquake of 25 April 2015
12
How to compare earthquake magnitudes
2
Fault representation
3
Evidence for "earthquake storm" at the end of the Bronze Age
2
Why are earthquake considered spot things?
2
What is the lateral ground acceleration, at the fault line, during a strike-slip earthquake?
1
OpenEEW - earthquake early warning by everyone?