What are the distinguishing features of an “artificial seismic wave” (e.g. a large underground explosion)

The U.S. Geological Survey says it detected a 6.3 magnitude "possible explosion" near Sungjibaegam, North Korea Sunday afternoon, "located near the site where North Korea has detonated nuclear explosions in the past."

South Korean Joint Chiefs of Staff say they detected an "artificial seismic wave" at 12:29 p.m. local time and are "currently looking into the possibility of it being a nuclear test."

The incident was near North Korea's Punggye-ri nuclear test site, which is in the country's northeast and the site of the five previous tests.

The magnitude and location of the event are strongly suggestive of the cause, but if the location were very different, it sounds like the nature of the seismic waves would already indicate that the source was artificial rather than a natural geological seismic event.

Question: What is it about a seismic wave measurements that would allow one to distinguish between natural geological and artificial causes?

below: "North Korea has conducted six nuclear tests. As this chart of seismic activity shows, the latest test on Sept. 3 was roughly an order of magnitude larger than earlier ones." From the NPR new item Here's How Big North Korea's Latest Nuclear Test Actually Was, Original: CTBTO 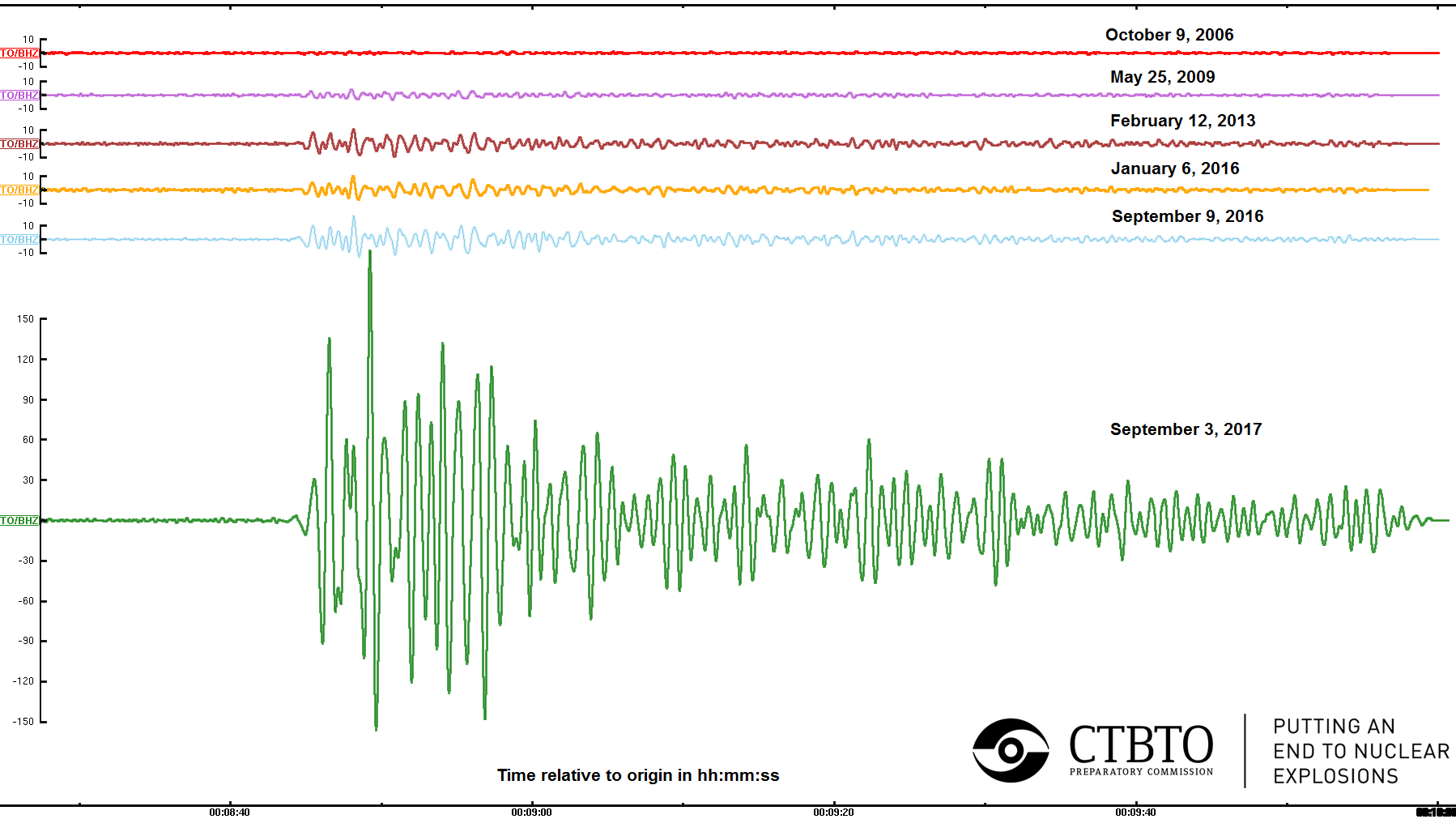 Several things can indicate that a seismic event is an explosion and not an earthquake.

Secondly, and more importantly, the P-wave radiation pattern (and S-wave as well) for an explosion is fundamentally different to that of an earthquake. This can be investigated by plotting the polarities of the first arriving waves of a seismic event on a stereonet, with the position on the net being determined by the azimuth of the source from the receiving station and the outgoing angle of the wave from the source.

Earthquakes radiate P-waves in four lobes, with alternating polarities. This is called a double couple source and it produces a fault plane solution with two positive and two negative quadrants.

An explosion, radiates P-waves equally in all directions and so produces an isotropic pattern.

You may have seen reports of a second seismic event after the nuclear test which has been interpreted as a tunnel collapse. This also has a distinctive focal mechanism, called a compensated linear vector dipole (CLVD). 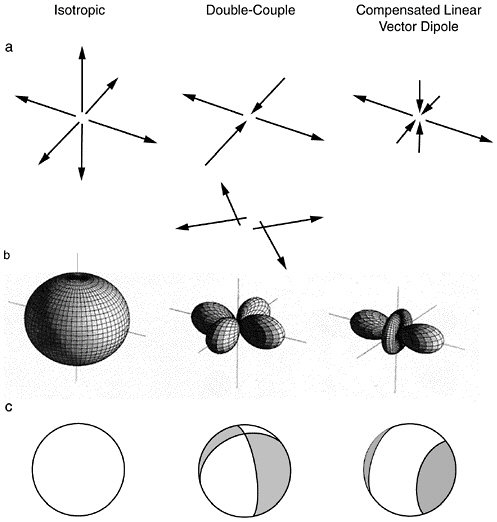 The photo shows directions of first motion at the source (a) (outwards = positive, inwards = negative), the P-wave radiation pattern (b), the steroplot of each focal mechanism (c).

These links give some further introduction to how stereonets are used to analyse earthquakes:

A bit more information - total plagiarism from Q&A: what earthquake science can tell us about North Korea’s nuclear test.

Any sort of earthquake or explosion, whether natural or man-made, produces different sorts of shock waves which travel through the Earth and can be detected by seismometers, which can measure very small ground movements. The fastest waves to arrive are the primary waves (P waves), followed by secondary waves (S waves), which travel deep through the Earth. Then come the slower surface waves, which cause the most shaking felt at ground level because they only travel close to the surface.

Studies of the numerous nuclear tests that took place during the Cold War show that explosions generate larger P waves than S waves when compared with earthquakes. Explosions also generate proportionally smaller Surface waves than P waves. Seismologists can therefore compare the size of the different types of wave to try to determine whether the waves came from an explosion or a natural earthquake.

Seismological data can tell us whether there was an explosion, but not whether that explosion was caused by a nuclear warhead or conventional explosives. For final confirmation that an explosion was nuclear, we have to rely on radionuclide monitoring, or experiments at the test site itself.

Similarly, we cannot explicitly differentiate between a nuclear fission bomb and a thermonuclear hydrogen bomb, nor can we tell if a bomb is small enough to be mounted on a missile

Not a full answer, since the other two are pretty much spot on.

Another telltale sign of an artificial "event" is, unsurprisingly, timing. Historically, shots are more often conducted at "round" times - here, at (almost) 30 minutes past the hour.

Not the answer you're looking for? Browse other questions tagged earthquakes seismic or ask your own question.

19
What are the physical upper bounds on the magnitude of an earthquake?
7
What is the meaning of seismic spectral blueing?
9
Can a 99.9% probability of an M≥ 5 earthquake within a 3-year period be verified?
2
Are the other causes of an earthquake (e.g. volcanic eruptions) the cause of the “sudden slip” which is the main cause of an earthquake?
5
What percentage of the earth's surface is covered by 2D or 3D reflection seismic data?
6
seismic wave detection standing at the epicenter
0
Can we predict the earthquake before it occurs a while? What is the maximum period?What are the signs of an earthquake soon?
4
What is the relationship between raw seismic data, CMP Stacking, NMO & Machine Learning
2
Travel Times for Seismic Wave Types - Why reflected t-x plot curves
1
What would be the phase shift and polarity of a seismic wave upon reflection