Growth of polar vortices vs projective geometry; what does this figure mean?

I was reading the Wikipedia article about a mathematical subject called projective geometry, and I noticed that the second image in the body of the article referred to the "growth of polar vortices". The only use of the term polar vortex that I'm aware of is in meteorology:

A polar vortex is an upper level low-pressure area lying near the Earth's pole.

Can anyone recognize how this drawing might relate in any way to meteorological polar vortices?

From the Wikipedia article Projective Geometry:

Caption: "Growth measure and the polar vortices. Based on the work of Lawrence Edwards" 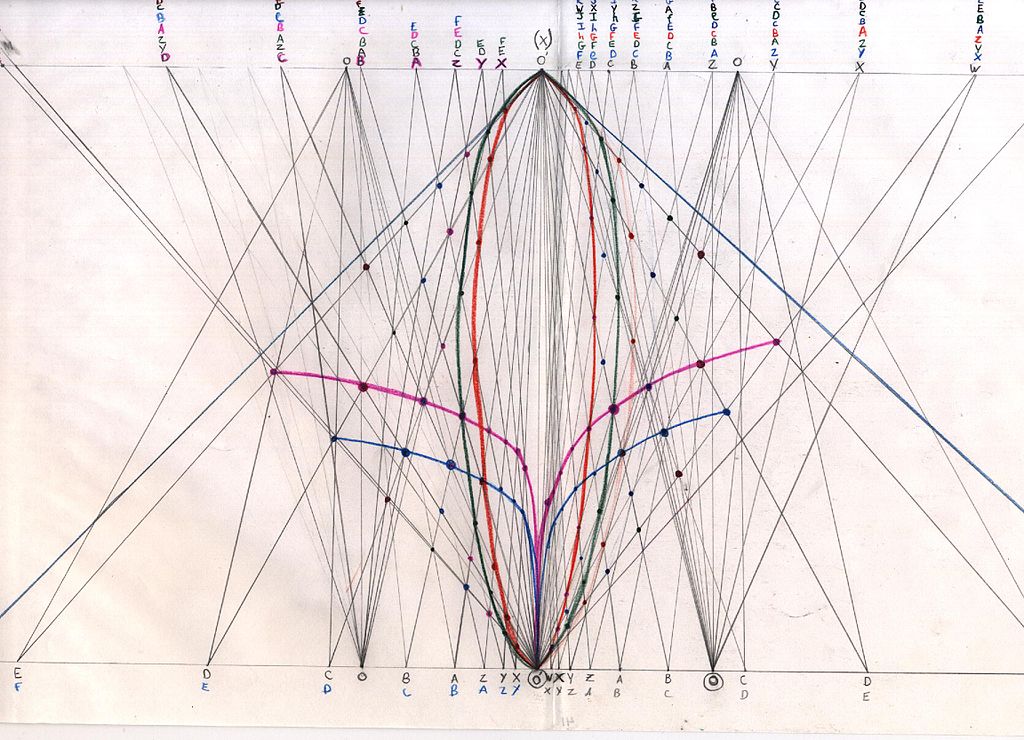 I suspect that this diagram has nothing to do with polar vortices in the meteorological sense. It’s hard to prove a negative, but digging into the source of this image led me in some very non-meteorological directions.

The file itself is entitled ‘Growth measure and vortices’ on Wikimedia (note absence of ‘polar’), with a source of ‘own work’ (by the user ‘Snowy Weather’) and the description ‘Projective geometry block in a Waldorf high school’.

Apart from the ‘Projective geometry’ page, the only Wikipedia page using this image is the one on Waldorf education, where it’s described as ‘Student work from a projective geometry block in a Waldorf high school’. The image was added to both the projective geometry article and the Waldorf article by the same user (not the original uploader of the image), who doesn't seem to have any background in meteorology. This makes me suspect that the ‘polar’ may have been added in error.

On the ‘Projective geometry’ page, the image is described as being ‘based on the work of Lawrence Edwards’. Almost certainly, this must refer to Edwards’ book Projective Geometry, which seems from the reviews to be rather esoteric:

The same author has written a book entitled The Vortex of Life – again, not related to meteorology – suggesting to me that he may be quite keen on the word ‘vortex’, perhaps in a broader or more unusual sense than one might find in the mainstream of scientific literature.

In short: the word ‘polar’ may or may not have been added in error by a Wikipedia editor, but in either case I am fairly confident that the ‘polar vortices’ referred to here have nothing to do with meteorology.

Not the answer you're looking for? Browse other questions tagged meteorology terminology mathematics or ask your own question.