I'm referring to an article I've read on Ars Technica about the differences in various weather models.
One thing that stood out for me was a mention of

Forecast models typically show their skill with three-, four-, and five-day forecasts. For simplicity's sake, we will focus on 120-hour forecasts. At this lead time, the average error of the European model with respect to Irma has been about 175km in its position forecast. The next best forecast is from the hurricane center, which is slightly more than 300km. An automated model, then, has so far beaten human forecasters at the National Hurricane Center (looking at all of this model data) by a wide margin.

A similar thing about models beating human forecasters was also mention in another article linked in this article and nowhere is there any other explanation for it, so:

Do humans seriously forecast extreme weather?
I get it, that meoteorologists get trained in physics, hydrodynamics etc, but I can't believe that humans try to compete with computers in crunching the numbers on differential equations. Or how else does 'human forecasting' work?

When multiple models more or less agree, the human forecasters use techniques and their judgement to split the difference. There is no splitting the difference when models disagree massively, as currently is the case with Jose. The current forecast (advisory 20A at 0800 AST on 10 September 2017), depicted graphically below, appears to be exactly that made by the ECMRWF. 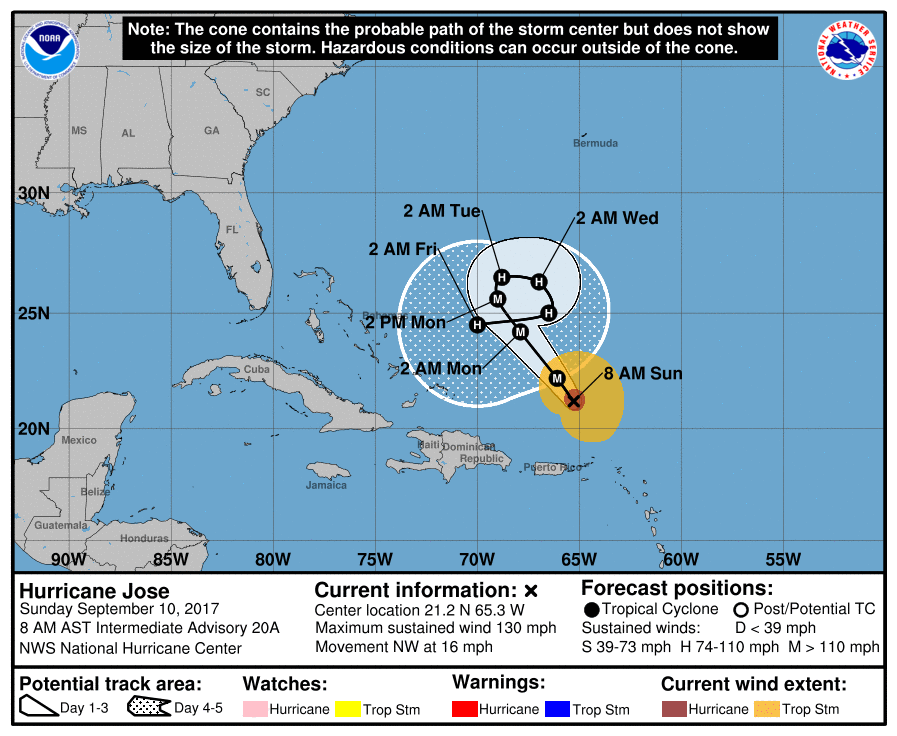 Not the answer you're looking for? Browse other questions tagged weather-forecasting tropical-cyclone or ask your own question.

3
Does a hurricane with a smaller eye have a lower pressure?
6
Would a hurricane increase intensity due to increasing translation speed?
3
Hurricane eye on landfall and relation to wind speeds
5
What is the largest hurricane possible?
14
Why did Hurricane Ida have so much precipitation when it reached the Northeast?