Why does the intensity of sunlight depend on your latitude? [duplicate]

People at the equator get to bask in more sunlight than Santa Clause and other inhabitants of the arctic regions. Not quite as pronounced, but they get more than me too.

Why is the sunlight more intense closer to the equator and less intense farther away from it?

As noted in the comments, this answer applies to things like sun-bathing and solar panels, but it does not apply so much to a specific point-receptor like an eyeball. If all objects in question are pointing directly at the sun, then the angle of incidence is equal for all of them and this answer does not apply.

For an optic facing its target, the amount of atmosphere that the light passes through is a very large influencer. At higher latitudes, the sun is not directly overhead, and so the light is not coming straight down through the path of least atmosphere. Instead, it comes in at an angle, passing through more of the atmosphere before it gets to you.

For sun-bathers, solar panels, and the ground in general, the sunlight absorbed and reflected does depend very much on what is described in this answer. For that reason, more expensive solar panels are mounted on devices which alter their angle to face the sun for increased light exposure. And a sun-bather could likewise increase their exposure by mounting their platform at an angle. This is the direction the rest of the answer will take.

Each unit (think "beam of sunlight") is spread over a larger area.

That might not seem intuitive at first, but that is the answer in a nutshell. To see why, continue to the long version.

The mechanics of the situation

The sun is huge, but at great distances it can be thought of as a point-source of light. The sun emits light in every direction, so its energy, the electromagnetic radiation, can be thought of as beams of sunlight coming out from it in every direction. However, the farther away you get, the fewer of those sunlight beams cross your path, and if you get far away you can see, from the below illustration, that the lines which cross your path are becoming ever more parallel and directional. 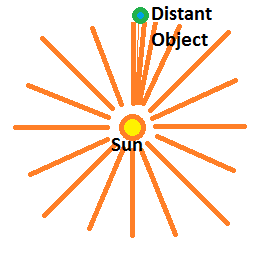 However, the sun is very, very, very far away - many millions of miles (and kilometers) away. At this distance, the electromagnetic radiation is all arriving at roughly parallel trajectories. That is, the light reaching us can be viewed as coming from a directional light source; it's all going in the same direction. You will see my crude illustration of that coming up after the next picture, but first... 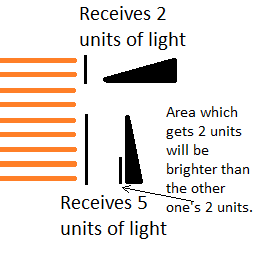 Looked at another way, the object above has to spread 2 units of light across its entire surface, where the object below gets that same amount of light concentrated on only a smaller part of it.

Now back to Earth

We see the same thing happen. Notice in the below picture that I have labeled the diameter of the area covered by my arbitrary unit of light. The distance is literally measured in image pixels. Near the equator, 1 unit of light illuminates 27 pixels, but closer to the pole the same amount of light needs to be spread out over 61 pixels of Earth's surface, so it's illuminated less. 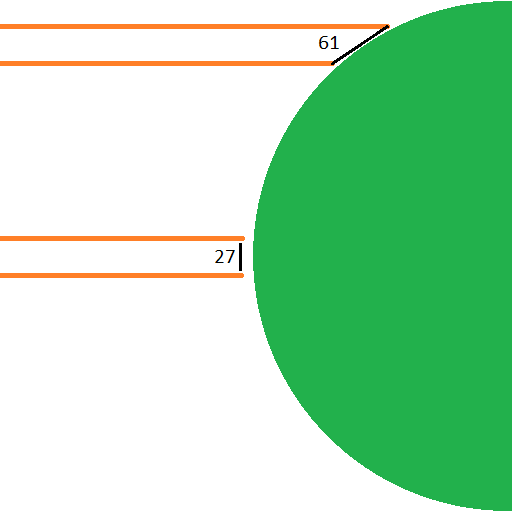 And that is the answer to the question, and the related questions mentioned in my introduction.

The specific ratio of illumination difference for the two areas in the above image would be (approximately) simply the division of the two numbers.

We can easily see from this why the sun might appear very much brighter or dimmer depending on the angle, and therefore depending on the latitude. This also explains the temperature difference: the equator is receiving a lot more energy, so it gets hotter.

I said earlier that this also answers the question about the illumination change for the seasons. The only extra bit of information that we need to understand that is this: Earth's pole around which it revolves is not perfectly perpendicular to the direction that the light is arriving from. Because of this, the specific angle changes as Earth orbits around the sun. The orbit around the sun takes a year (That's what a year is, by definition), so this change of angle over time has a yearly cycle during which the angle of incidence (the fancy term from above again, which just means "the difference of angle of the light to the object it is hitting") changes. This change is large enough to further change the sunlight that we receive, in the exact same way as discussed above.

Just like before, this also affects temperature. The temperature, however, cannot be calculated by a simple ratio of area coverage. The temperature is affected by multiple other complicated systems. One of the major temperature influencers is the weather. Another of which is the difference between energy absorbed and energy lost (a physics thing: Earth is not a "black body" radiator).

Weather affect on temperature is very complicated and would require its own post much longer than this one, but to sum it up super succinctly: stuff like the wind and rain and such change the temperature and also move it around.

The physics black-body thing likewise would require its own long post, but again, super succinctly: Earth is also putting out its own energy into space at the same time it is receiving energy from the sun, and the affect this has on temperature is a fine balancing act. Once that balancing act tips to one side, the temperature swings way over in that direction: during the spring when temps are rising the energy absorption is enough higher than the energy radiation that the temperature rises, and the opposite is true for autumn when temps are falling.

The above descriptions for both weather and block-body radiation are way oversimplified.

And now the answer applies fully to seasonal changes as well, and it applies not only to illumination but also to temperature. I will leave it as an exercise for the reader to think about the daily affect (Why is it so much easier to look at the sun when it is low on the horizon just before it sets?)

And, as stated before, there are other influencers for these things; this just happens to be the biggest one.

Not the answer you're looking for? Browse other questions tagged temperature sun light equator insolation or ask your own question.

1
If the earth is a globe, what causes temperature differences across lines of latitude?
4
Are you more likely to get a sunburn at the pole than the equator?

14
Is spectrum of sunlight the same in the summer as in the winter?
2
Why does it rain during the sunny day?
5
Why is the part of the earth tilted towards the sun warmer? Which factors matter more?
3
Why was the sky SO yellow?
5
Why does more sunlight hits the equator than the ecliptic path?
3
What is the lowest latitude for which if the ideal solar energy received each day for a year is graphed, the graph would contain one peak?
6
Does the amount of UVA radiations one receives depend on the day ot the year?