Can someone please explain the difference between sedimentary facies and formations?

A formation is a unit of stratigraphy. It refers to a set of sedimentary layers which are somehow distinct from those above and below them in the stratigraphic sequence. This may be because they have a different lithology, different sedimentary structures, or different fossil assemblages, or something else entirely.

A sedimentary facies is a set of rocks which where deposited in the same sedimentary environment. Typically deposition in this environment will leave behind distinctive signatures in the rock which can help to identify the environment of deposition.

Within a formation the facies can change both vertically and laterally. Equally, the facies may not change at all over several formations.

A "sedimentary facies" is just a descriptive term. For example all rocks (anywhere in the world) that have similar characteristics (e.g. mineralogy, color, grain size distribution, sedimentary structures, fractures, etc) can be considered to be of the same facies.

A "formation" is a named rock unit in a specific place.

For example, let's say that in Canada, geologists have named some rock units:

And in Australia, they have named some other rock units

Let's say that the geologic process that created Fromation A and Formation X was a river (i.e. fluvial) system, then it is common for people to call any rock elsewhere, with similar characteristics as Formations A and X, a rock of "fluvial facies". That is a short way of saying "a rock with many of the characteristics of other rocks that are interpreted as being created by a fluvial system".

Although this is technically an incorrect use the term "facies" because you are adding an interpretation to what is supposed to be a purely descriptive concept, people do it all the time.

Also, once you know what certain common facies look like (e.g. fluvial facies, delta facies, etc), it helps when trying to divide an entire rock section of a specific area into formations.

A real example of this is the Bouma facies (commonly called the Bouma "sequence" for historical reasons). Basically, some guy called Bouma noticed that many rocks around the world that had been interpreted as being formed by turbidity currents had similar characteristics:

This is extremely helpful because it allows a quick and robust interpretation of geologic processes if a similar facies is found in another rock around the world. 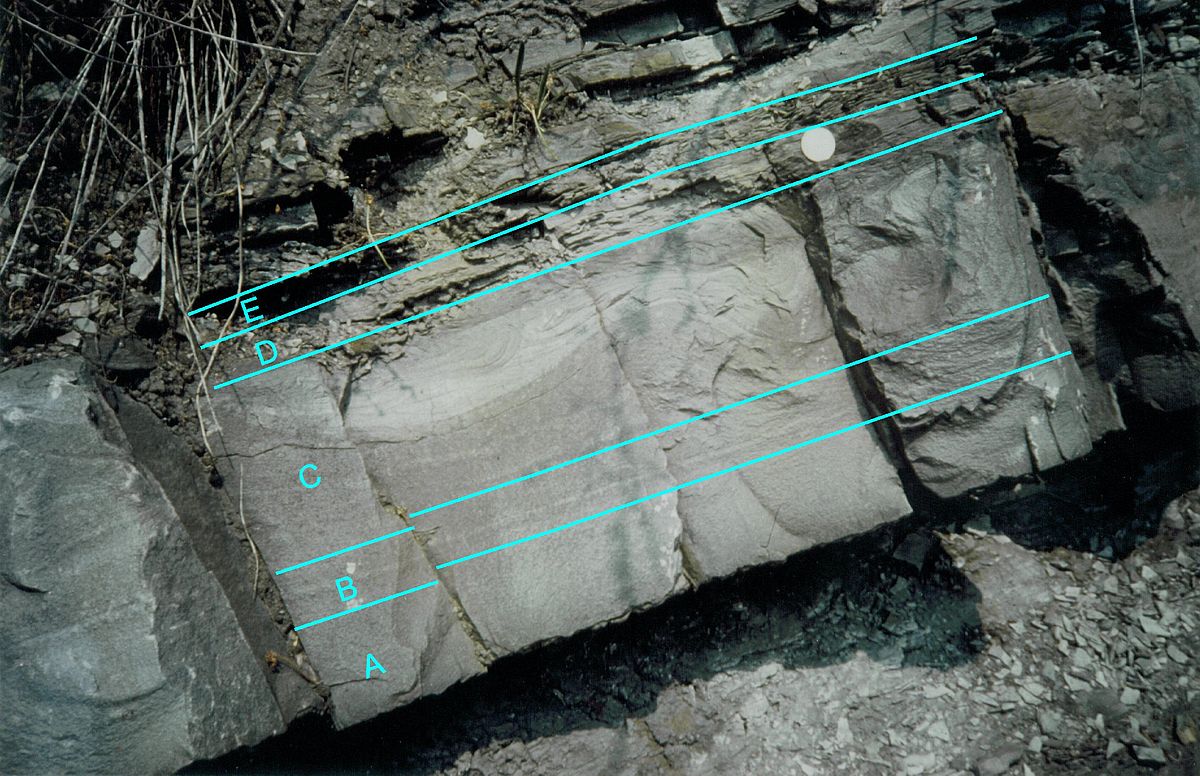 Additionally, experimental geologists will then try to recreate the set of characteristics in a laboratory flume experiment in order to gain even more insight as to the necessary flow conditions that had to have taken place.

The definitions are relatively similar. Both are distinct layers are of rock, but they do have their distinctions.

Formations are one of the larger category of layers, having several subdivisions (members, groups, ect), and formations tend to be more widespread in occurrence and identifiable across many outcrops. They are laterally continuous. Usually a formation refers to some linked structures or environments, like a group of volcanic events, or a sequence of floodplain deposits. Parts (members, groups) of a formation are often distinct but the collection of related ones is called a formation. So think of it as a widespread identifiable layer or sequence of layers.

The morrison formation in North America is a classic example, it's a collection of layers of sediment spread over most of the central US from the Jurassic, it varies in color and grain size but is all fluid deposited sediment originating from the same time period. It is the floodplains and drainage that formed as the western interior seaway shrank.

Facies on the other hand are basically any distinct layer or any size, where you can tell the difference between them somehow. Usually facies are defined by what is being studied, a formation is always the same but the same exact outcrop may have different facies depending on what you are studying. Say petroleum facies defined by hydrocarbon content, or seismic facies defined by sonar reflectivity.

For an analogy, think of a library, any book by the same author would be a formation, while the individual physical books would be facies, some facies (books) may be a single formation (author only wrote one book), and others may only be a small part of a larger formation. If you go to another library you can find more by that author (formation) but they will not be the same exact book/s (facies) although they may be copies of the same book. It's not a perfect analogy but it helped me when I was a student.

Not the answer you're looking for? Browse other questions tagged geology sedimentology or ask your own question.

5
Difference between "Geology" and "Physical(Natural) Geography"?
3
When metamorphic rocks undergo pressure, how are they changed?
4
A sedimentary rock with only minerals
1
Crystallization path of diopside-wollastonite-silica systems
5
What are the cubic formations found inside Larimar gemstones?
1
Where can I find papers on the geology of the Wastach Range in Utah
1
Is there any intuitive and easily understandable way to help students understand the triangular facet of outcropted stratigraphy?