What was the density and composition of Earth's atmosphere during the Cretaceous warmest period?

There was time during the age of dinosaurs when the polar regions were ice free. The earth was obviously much warmer but a run-away greenhouse effect did not occur.

This was most likely because the continents were so configured that ocean currents more adequately transfered heat around the globe. And The particulate dust from volcanic activity (more active back then) accumulated in the stratosphere, reflecting solar heat and light back into space.

One reason creatures of immense size such as dinosaurs were able to evolve is the oxygen requirements for the respiration and metabolism for such massive bodies were present in the atmosphere during this period.

Similarly, the fossil record indicates vegetation size was much greater during this period than today due to the higher amount of CO2.

This atmosphere would have to have greater percentage composition of oxygen (for dinosaurs) and CO2 (for greenhouse affect and greater plant biomass) or a much denser atmosphere or both.

What was the density of the atmosphere back then either in terms of air pressure at today's sea level and standard temperature Or In kg/square meter at STP (Standard Temperature and Pressure)?

What were the percentages of O2 and CO2?

Recent analysis of the contents of air bubbles preserved in prehistoric amber reveal the oxygen composition to be 32% back then compared to just under 21% today. These tiny bubbles have remained trapped in these amber samples for about 80 million years, which dates them well into the Cretaceous era when dinosaurs and other huge creatures roamed the earth.

Said analysis also revealed that nitrogen made up the rest save 1% for Argon, CO2, and other trace gases. The percentage of CO2 was not specifically stated but mentioned as similar oxygen to CO2 ratio as today's atmosphere. Whether the total air pressure air density of the atmosphere was greater back then is not mentioned, most likely because this would be difficult to ascertain from the samples.

An atmosphere 50% richer in oxygen but at the same atmospheric pressure and density at sea level as today would have allowed land animals to get by with a lower lungs to total body mass ratio and thus allowed the existence of extra massive creatures such as dinosaurs.

I assert that the asteroid that struck the Yucatan area 65 million years ago caused most of the forests and other terrestrial vegetation to ignite into flames. The whole earth would have been on fire, at the end of which the oxygen levels were depleted to what they are today. This is confirmed by analysis amber air bubbles from 40 million years ago, post asteroid impact, revealing an atmospheric composition and oxygen levels closer to today's.

Dinosaurs and other massive terrestrial animals could not then make a comeback since the lower oxygen content of the atmosphere would have restricted metabolism to maintain massive body sizes. 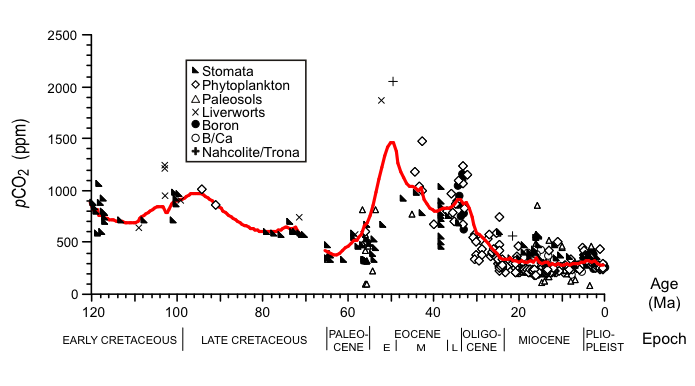 It is based on compilations from Royer (2010) and Beerling & Royer (2011), using a wide variety of proxies, but mostly fossil leaves stomata for the Cretaceous. It might be a bit outdated now but most articles out there do give values on the same range: ca. 400~500 ppm at the Cretaceous-Paleogene boundary and values fluctuating between 500 and 1500 ppm before that, with a maximum during the mid-Cretaceous.

We focused on simulations of the Cenomanian, a mid-Cretaceous stage characterized by high $p_{CO_2}$ [e.g., (12)] and the warmest conditions of the past ~100 million years (13). Paleo-$p_{O_2}$ estimates inferred from stable-isotope carbon compositions indicate that the atmospheric percentage of $O_2$ was as low as 10 to 11% during this interval (7, 9), with one biogeochemical model indicating levels as high as 32.5% (6).

Not the answer you're looking for? Browse other questions tagged meteorology atmosphere paleoclimatology or ask your own question.

30
What is the status of the Raymo & Ruddiman idea that Tibet cooled the Earth?
19
Why does Earth have abundant oxygen in the atmosphere?
16
Is there any evidence for higher air pressures in the geological past?
4
3 Billion years ago, the earth is covered with Carbon Dioxide. Where did it go?
2
Atmospheric conditions needed that blocks all bright light during sunsets and allows you to stare directly at the sun
1
In a zero carbon future but with increasing energy requirements would Earths oceans continue heating?
7
Where did all the CO₂ come from that was deposited as coal during the Carboniferous?
1
How much of the Earth's surface was covered with water during the Mesozoic?