What are the arguments FOR Climate Change influenced by the drifting of Geomagnetic Poles? [duplicate]

*Over some years I was hovering over the developments of the ESA SWARM mission and probing random magnetometers from the Russian-Ukrainian observatories as a private researcher and a non-scientist. I'm trained in social sciences, so I have no background or methodology in science as a discrete discipline Did anyone else make a connection between drifting magnetic Poles, climate change, tropical relocations and such? Did anyone explore the Sun-Earth connectivity in relation to such changes? I leave some figments of research behind. I would be more than happy if I would be provided with an informed answer, thank you *

Impact of the Geomagnetic Field and Solar Radiation on Climate Change

Direct observations indicate that the magnitude of the Earth’s magnetic axial dipole has decreased over the past 175 years; it is now 9% weaker than it was in 1840. Here we show how the rate of dipole decay may be controlled by a planetary-scale gyre in the liquid metal outer core. The gyre’s meridional limbs on average transport normal polarity magnetic flux equatorward and reverse polarity flux poleward. Asymmetry in the geomagnetic field, due to the South Atlantic Anomaly, is essential to the proposed mechanism. We find that meridional flux advection accounts for the majority of the dipole decay since 1840, especially during times of rapid decline, with magnetic diffusion making an almost steady contribution generally of smaller magnitude. Based on the morphology of the present field, and the persistent nature of the gyre, the current episode of dipole decay looks set to continue, at least for the next few decades 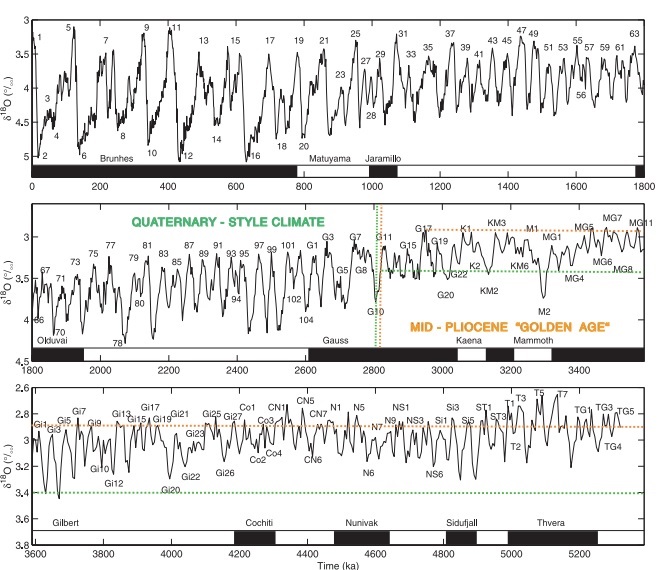 The precession peaks found in the 3180 record from core MD900963 are in excellent agreement with climatic oscillations predicted by the astronomical theory of climate. Our ~180 record therefore permits the development of an accurate astronomical time-scale. Based on our age model, the BrunhesMatuyama reversal is dated at 775 + 10 ka, in good agreement with the age estimate of 780 ka obtained by Shackleton et al. 3 and recent radiochronological A r / A r datings on lavas [9-11].

Browse other questions tagged climate-change geomagnetism or ask your own question.

23
Does the strength of Earth's magnetic field influence its climate?