Is a glacier advancing or retreating? How to tell?

The easiest way is to look a the glacier margins. If the ice is in contact with vegetation or rock covered in lichens or moss, it means it is most likely advancing. If you see a band of life-less rock in between the ice and the first plants/lichens/moss, it means it is retreating.

Some examples I've seen myself:

This glacier in Geenland is advancing, you can see the ice and vegetation in contact 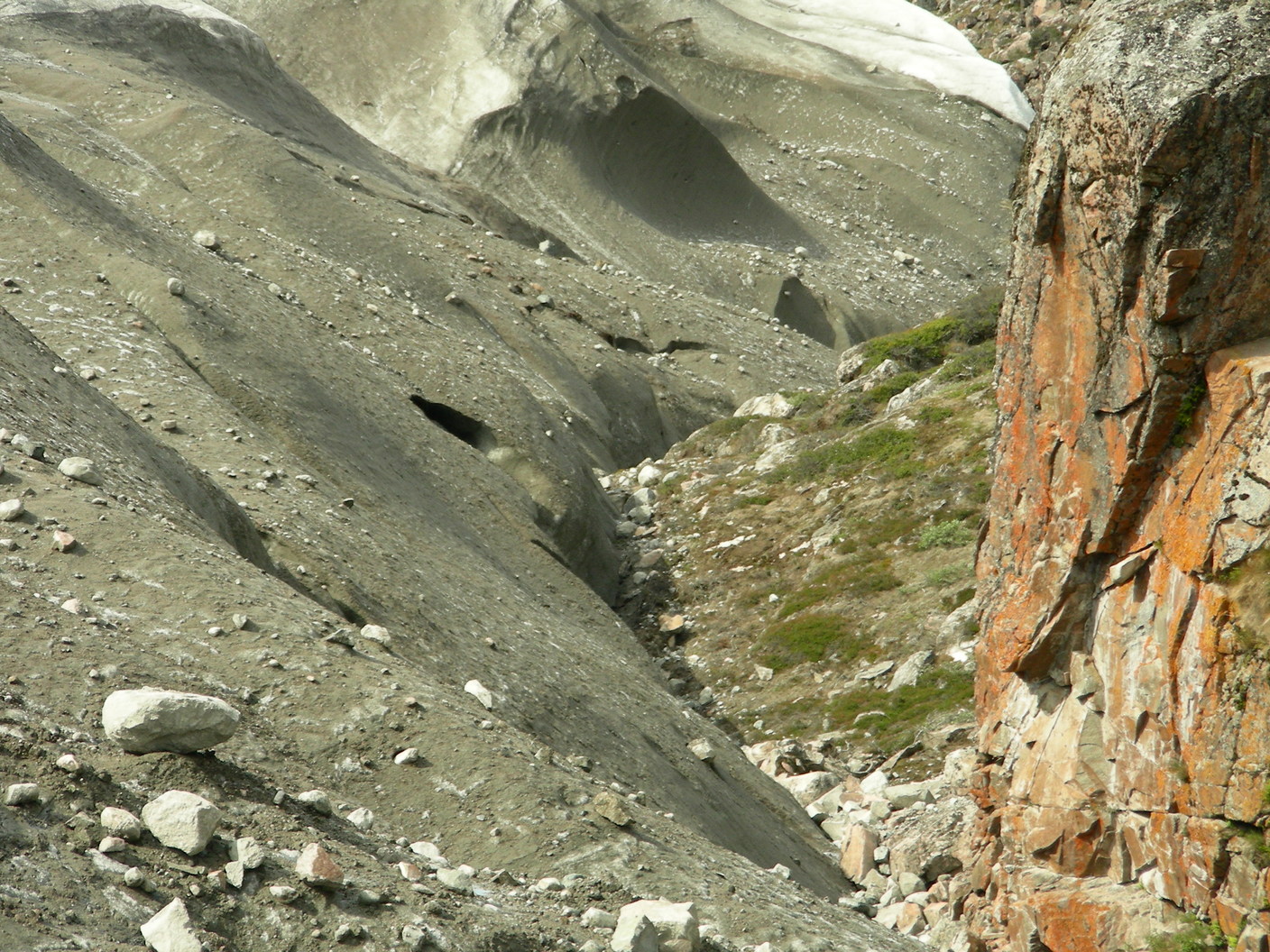 Same glacier, you can see how it is even pushing vegetation, proving it is advancing 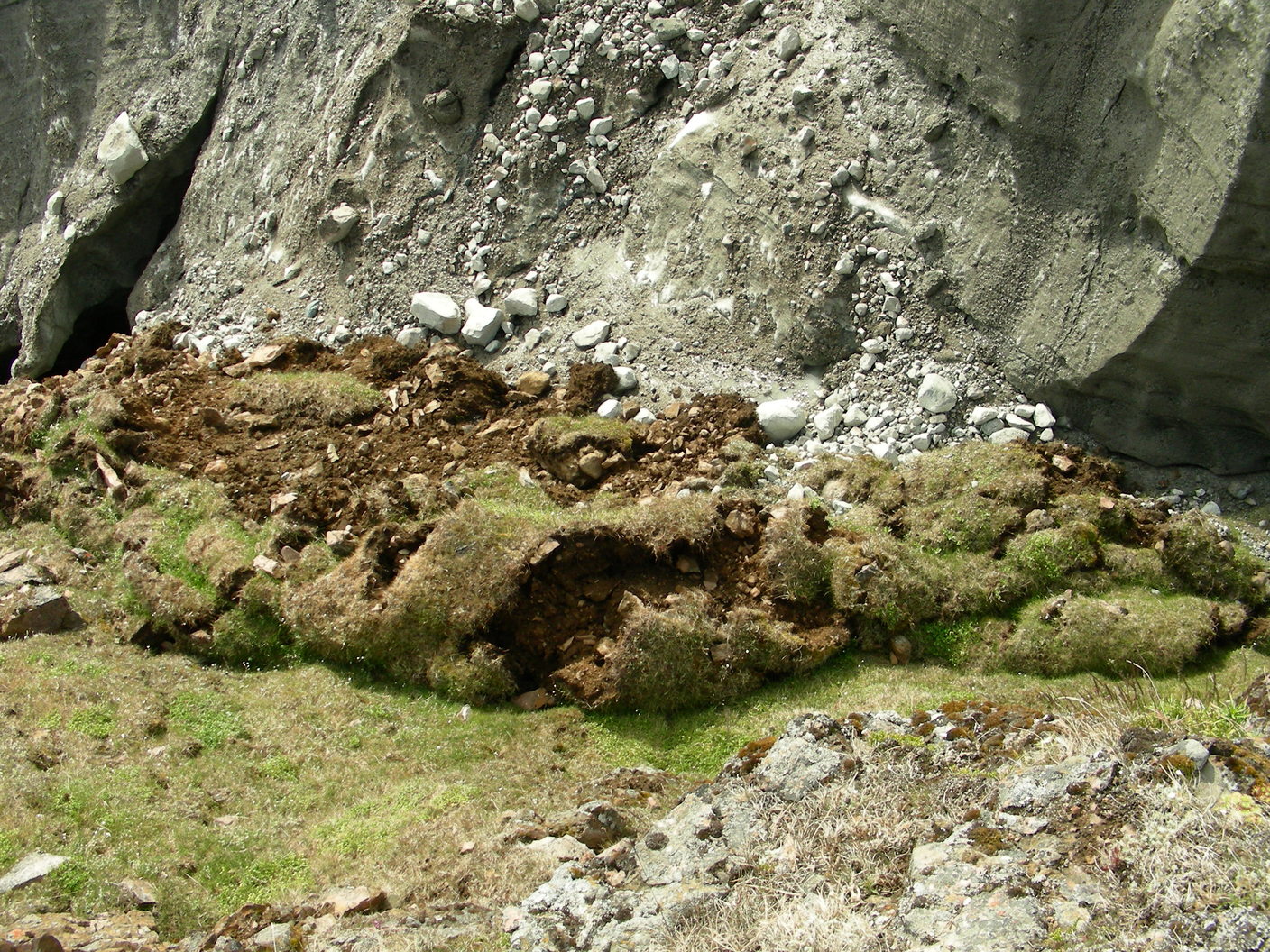 However, advancing glaciers are the exception. In most cases they are reatreating and what you see is a band of life-less rock surrounding the ice like this:

The advancing or retreating state of a glacier can have different time-scales. For example a glacier can be retreating on a decade scale, but it might advance every winter, but the recession on summer is large enough to produce a net retreat every year. Small glaciers can also react very quick to weather variations, therefore even if one is receding at a century scale, it can advance one year due to exceptional snow accumulation over few years. So you have to interpret this observations with care, and consider what's the timescale at which the plants/moss/lichens can colonize the rock in the area, which in temperate and low elevations will be between a few years and a decade. Moraines, trim lines and other features can tell you about the advancing/receding history of a glacier at longer timescales.

The only signs I know of to identify glacial retreat on first meeting is the presence or absence of "dead ice", the presence of "push" on moraines, and the state of any terminal lake.

These are identifiers that can indicate advance or retreat, either current or historic, but at a glance there are no definitive signs of any long-term trend in the glaciers' behaviour. This is chiefly because glaciers advance and retreat on a seasonal basis so a particular feature may be the product of one winter of heavy snow (some years ago) or one very hot summer.

If, before winter snows start and temps consistently drop below sustained freezing there is less total ice mass than they prior year at the same point, it is shrinking or in decline. If there is more, it is growing that year. If a pattern of multiple years in the same direction, that is what the glacier is doing. Reduction of mass can be from melting or sublimation, it does not matter. Increase can be snow, other freezing precipitation, or other water sources, again, does not mater where the ice came from, only that there is an increase. These are simply the meaning of growing or receding. They cannot be determined by looking, they require long term observation.

Receding and advancing are actually a different concept. They are movement of the glacier. A glacier may be declining in size while still advancing in its path, or it may be growing, but receding, often by getting thicker at its origin. Again, recession and advancing cannot really be detected by simple observation, it requires comparison over time and often there may be a localize short term advance while the glacier has a general average recession action.

Think of Arctic glaciers as an example. It is generally agreed that most are in decline and shrinking in total size. And yet, many continue to advance as can be seen by there repeated calving into the sea. Not all, but many keep the same front edge, roughly with the sea. A chunk breaks off, and the mass behind moves forward to replace it. The total size though, behind that front, to the sides and the depth, the part of the glacier that feeds the advance continues to shrink though.

Just my thought. If the glacier is at least a few degrees below 32 °F (0 °C) steady state it's probably advancing. If at 32 °F it probably melting.

Not the answer you're looking for? Browse other questions tagged glaciology glacier or ask your own question.