How Can Smog in Metropolitan Cities like Delhi & Beijing Be Reduced?

These two cities are facing the worst smog in Asia and I think in the world and people of these cities have no choice other than to wear masks when going outside. So what Advance technology that can be used by these two state government so that smog can be reduced to a minimum or can be eliminated?

these 2 counties can't avoid smog due to large no. of factories and farmer burning residual so what Technology that can be used to reduce/eliminate smog.

The first thing to do is to stop putting pollution in the air, particularly very small particulate matter that are produced by combustion.

For the Beijing Olympic Games of 2008, the Chinese government forced the polluting plants and factories in the vicinity of Beijing and nearby areas to stop operating for weeks prior to the games and during the games to ensure the air in Beijing was clear and had minimal pollution during the duration of the games. The measure was successful.

This is an easy solution that results in clean air. The difficulty with this is that it is detrimental to the economy in the short term. For a longer term solution, energy sources need to be changed to ones that do not cause air pollution.

I add some information here to present the control strategies which have been done by China government.

A series of paper have reported that coal combustion is the main cause of the air pollution in China. This issue usually gets worse in the winter months due to the fact that coal is used for domestic heating.

In the winter of 2017, China government decided to transform the fuel types for each of the residents even in rural areas within north Chian as fast as possible. Here is a figure I captured near my campus, the giant pipes convey the natural gas to each of the residents for heating and other uses. 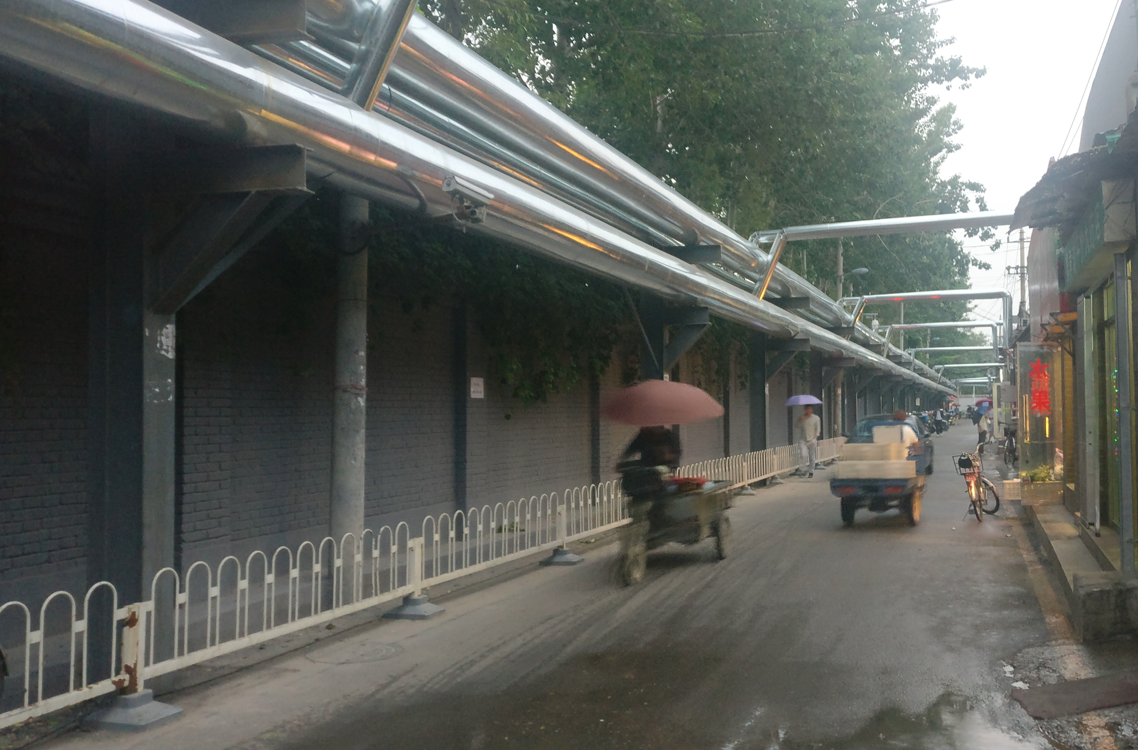 Although the heating fee might increase, the consumption of coal, especially for those bulk coal (known as cheap with high amount of emissions) was cut significantly. The effects of energy structure adjustment has been observed clearly. As shown in this figure presenting the monthly variations of PM2.5 in 2015, 2016 and 2017, the improvement of air quality is an obvious one. Especially in December when the strict control strategies were implemented, the concentration decreased sharply compared to 2015/2016.

By sharing the example of Beijing, I make a point that the improvement of air quality is possible by applying the current technology. What's more, the movement from traditional fuels to clean fuels seems to be a more efficient approach compared to the end-of-pipe control with advanced technology.

There is no technology that makes air pollution disappear on such a large scale after it has already been emitted into the atmosphere. However, timing burns so that air quality impacts are minimized is possible if meteorology is considered. If there is a meteorological forecast that mixing heights will be low, a "burn ban" should be put in place. If mixing heights are expected to be high and/or the wind direction is expected to blow away from the city, then burning could be allowed with minimized effects on air quality in the densely populated areas. This type of practice is used in the USA in various states.

Often the cheapest solution is to prevent pollution (not burn leaves, add filters to factories, etc.), but in many cases pollution can be natural, e.g. fine sand from a desert.
Solar updraft towers are a promising technology that can reduce the pollution near the cities, by creating fast wind which moves the particles to the higher layers of atmosphere. When using the tower only to improve the quality of the air, the greenhouse can be much smaller than the one needed to generate electricity. A small prototype in china have shown sizable improvement in air quality. And here's a link to a more detailed study.

Not the answer you're looking for? Browse other questions tagged atmosphere climate-change air-pollution air-quality geoengineering or ask your own question.

8
How is the radiative efficiency of a given gas (like a given CFC) analytically calculated?
6
What is a temperature inversion and can it trap smog/pollution?
3
How can I test the Air Quality?
3
How can I account for rainfall effects on air pollution?
5
How would Earth map look like if all ice melts?
4
How can agricultural ammonia lead to PM2.5 production in the atmosphere?
5
How can methylmercury in the ocean be reabsorbed into the atmosphere?
1
How can I specifiy a substance in AERMOD?