Why does Australia have no chrome?

I've been trying to collect resource data about Australia for a few years. Some good reference sites are AustraliaMinerals.gov.au and AustralianMinesAtlas.gov.au

Australia seems to be pretty rich in minerals, including iron, copper, nickel, gold, titanium, uranium, and I think lithium and Rare-Earth elements too. But one thing I have never found is chromium. Chrome is essential in the steel industry.

So I'd like to know why. What geological features does Australia lack that make it lacking in chrome? Or do geologists believe that there's a realistic chance that a good chrome deposit is hidden somewhere? And where could that be?

The ore deposit was discovered in 1924 and was once worked under the names of Jimblebah and Murramunda. It was mined as a series of small open cuts for several decades with most of the pits being less than 70 metres deep.

The deposit is associated with an ultramafic unit.

Chromite deposits in this rock occurs as massive chromite with up to 150 lenses having been mapped so far. The largest around 340 metres long and 6 metres wide.

Chromium clinochlore is mined at Coobina/Jimblebah.

Other deposits of chromite occur at Mount Christie, Tomkinson Ranges and Wingella Hills, in South Australia.

Mount Christie is within the Gawler craton and Tomkinson Ranges and Wingella Hills are within the Musgrave block.

The best intersection was 1.5 m at 9.8% Cr2O3. Microprobe analysis showed the chromite to contain ~48% Cr2O3 and 30% FeO, which may only be suitable as chemical-grade chromite.

Chromite has been identified within Mesoproterozoic Giles Complex rocks in the far northwest of the State. It occurs as rare veins up to 10 mm thick within layers of pyroxenite in the Tomkinson Ranges (Coats, 1956) and as grains in ultrabasic rocks of the Wingelinna Hills intrusions. A representative sample gave an assay of 16.9% Cr2O3.

Some more information from Geoscience World and Research Gate.

Australia does have chromium ores. This table from the World Mineral Production Report (2011-2015) published by the British Geologic Survey shows that chromium ores were mined in Australia as recently as 2013. 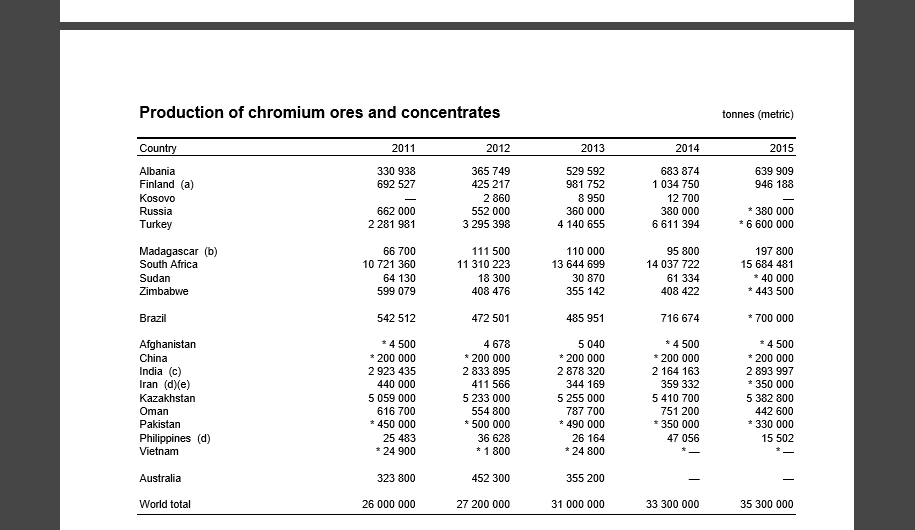 It does have chrome , but : 1- It has not been found. or 2- The Cr content is not high enough to be considered an ore. Or 3- The total amount at a location is not sufficient to build the infrastructure to extract it. Not likely 4- the political situation is not stable , eg, there are copper deposits in Africa up to 4% Cu that are not extracted while Cu deposits of 0.05 % are commercial in the US.

Not the answer you're looking for? Browse other questions tagged geology mineralogy minerals resources or ask your own question.

17
Why does the colour of amethyst fade if exposed to too much light?
10
What kind of minerals have no cleavage plane?
12
Why does halite have perfect cleavage at the (110) plane?
11
Why do most opal deposits occur in Australia?
5
How does quartz form in calcite veins?
0
Why does halite have a cubic crystal
4
Why does Morocco have so much phosphate?
3
How can the 'crystal cleavage' of apatite have a four-digit number?
4
Why is Melanterite white or colorless?