Do high pressure systems draw air towards them?

I refer to the this very recent article, which quotes Andrew Watkins (Manager of Climate Prediction Services at the Australian Bureau of Meteorology).

My understanding has always been that air flows away from high pressure towards lower pressure, so the following quote from the referenced article confuses me. Can anyone explain it for me?

"There's been a big high pressure system drawing air in off the ocean, keeping it a bit cooler for Sydney," Dr Watkins said.

As Fred said, it's just an unfortunate word choice that makes you think the professor is suggesting air flows towards the high.

Indeed, a surface high pressure south of Sydney would be the circumstance to have the air circulate around it in such a way as to "draw" air onshore from off the shore... even as it's actually really flowing somewhat away from the high.

There's a long-range model forecast showing exactly this setup building after a strong low potentially passes by this week... and so Sydney may be held cooler again just in time for Boxing Day: 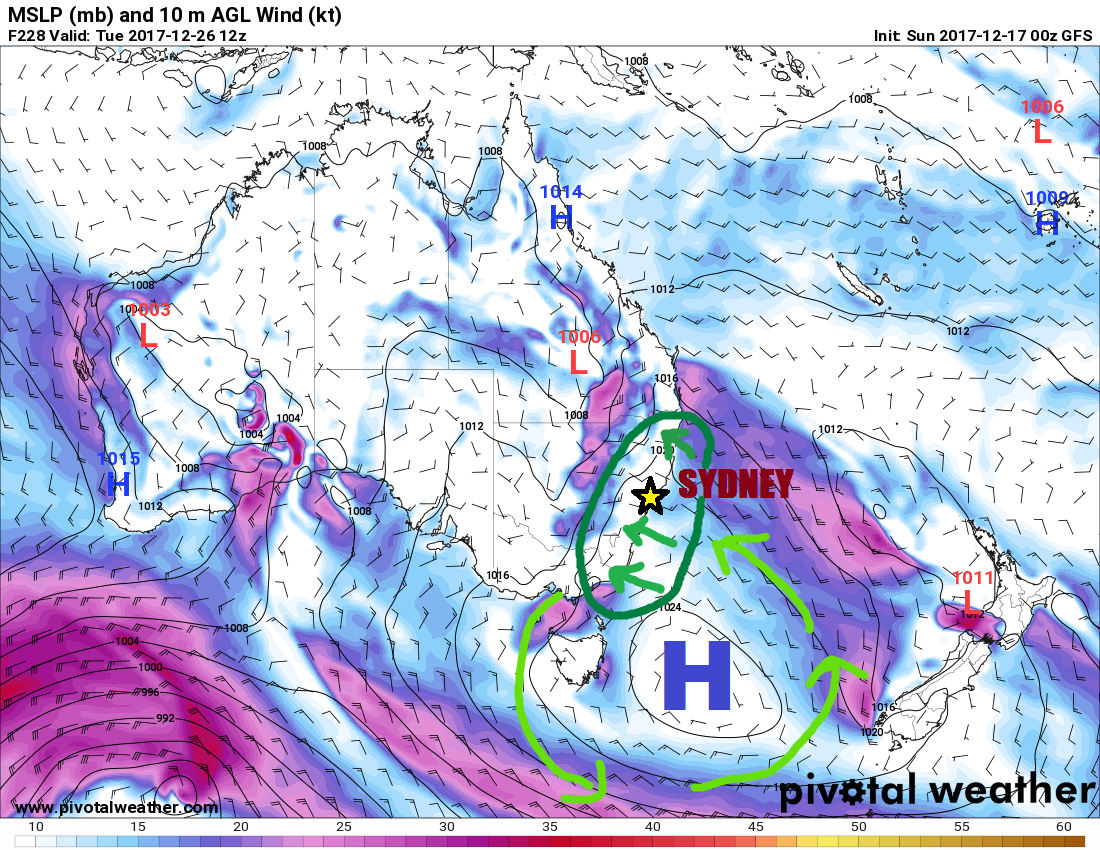 (This is only one model's long-range forecast, and the skill in such forecasts is quite low. I present it to show this scenario, not to make any forecast as to whether it'll actually happen next week)

You can see the green arrows are bringing air onshore. This link suggests current ocean surface temperatures are around 23°C (73°F). So that would likely reduce the temperature slightly (if you explore the plots at pivotalweather.com for Australia, it currently shows a forecast high closer to 23°C for the day, rather than nearer the 30s many spots in the area see tomorrow).

Yes, the pressure gradient force causes air to be pushed from high pressure to low pressure. However, other forces typically counteract a large part of this, such that at the surface, air flows quite tangentially (most in a circle, rather than moving inward or outward). This is because as moves from the high to the low, the rotation of the Earth causes the winds to appear to miss its original destination (the Coriolis Force). Higher up in the atmosphere, this actually causes air to generally not even flow from high pressure to low pressure at all! At surface levels, there's a fair bit of friction which slows wind down the wind some, and thereby causes the Coriolis impact to be less than it should.
At those more significantly high levels in the atmosphere, since there's no appreciable frictional effects, the earth's rotation entirely resists the high-to-low movement over long periods of time, and you end up with a wind that instead cuts perpendicular to both, not getting nearer or further away: 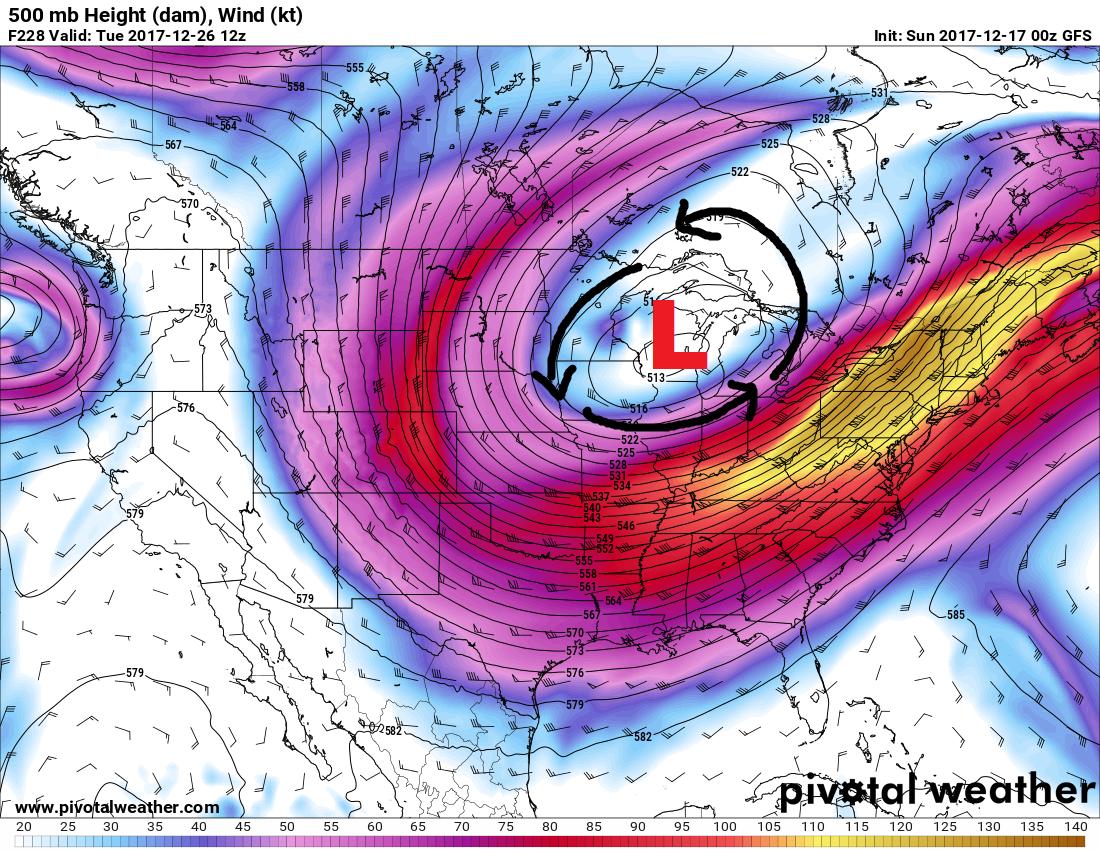 (Once again, only one model's long-range calculation, and not a reliable forecast. But... let's just say that won't bring tropical hurricane weather if it comes together!)

Look closely and compare, and you should be able to see, both in the little black line segment symbols showing wind flow, and in my arrows drawn to show a more continual path (if I managed to draw the arrows well enough!), that the wind is flowing outwards some in the Australia picture... but in the US picture (which is showing heights up closer to 5 km [3 mi] above the ground), the wind is basically perfectly balanced, neither getting near or closer... which is also matched in the the western region which winds are "slaloming" between a low over NW Canada and a high nearer Seattle). [in case it causes confusion, remember highs/lows rotate the opposite direction in opposite hemispheres, so the high in Australia is clockwise, and the low in the US is clockwise]

The upper-level forces directing the wind display what is called geostrophic wind balance. The low-level winds are called ageostrophic because the friction leads to imbalance.

Regarding haresfur's answer, while he's incorrect that the wind sneaks into the high from another cardinal direction (air basically flows outwards from surface high pressures towards the north, the south, the east, and the west all at the same time)... it is also indeed true that conservation of mass does have an additional consequence: it causes air to move vertically to counteract the air flow between the pressure systems [for near the surface, air sinks down into the high from above to replace the lost air moving outwards... and air rises up from a low to evacuate the excess incoming air]. The overall net change in air amount can cause a high pressure to build even stronger despite the fact it seems to be losing air on a weather map... and likewise cause lows to get even stronger despite large convergent flow.

There are complex factors [such as the fact that the volume of air changes when the temperature changes... and in the end, moisture condensation is the central driver of the growth of most pressure systems (also called latent heat release)], all that help determine this ledger balance, and whether highs and lows will continue to ramp up or die off. But it's just worth thinking about the 3-D picture sometimes.

Conservation of mass. If air is moving away from a high pressure system at some altitude, it must be getting replaced at another or from another direction.

Without seeing the details, I think what is happening is that there is a high pressure system over the centre of the continent that results in high temperatures. The hot air rises producing on-shore winds from the cooler ocean (adabatic? adiabatic? not sure of the correct terminology).

For a lay-person overview of the different major climate influences for Australia, check out the Climatedogs.

Not the answer you're looking for? Browse other questions tagged meteorology weather-forecasting barometric-pressure or ask your own question.

7
Relationship between atmospheric density and atmospheric pressure?
9
Why do certain areas on Earth have a higher or lower air pressure at sea level?
11
How are low pressure zones tracked across the ocean?
1
Why is the Atlantic anticyclone an area of high pressure if it's the warmest spot on the planet?
2
With respect to latitude and time of year, what geopotential heights are associated with low pressure systems on the North American landmass?
2
How to identify low or high pressure area
3
Convert air vapor pressure to relative humidity
0
How closely related is surface air temperature to pressure?
0
When it is said that air moves from warm object to a cold object, how is it possible that air moves from high pressure area to low pressure area?