Can we predict the earthquake before it occurs a while? What is the maximum period?What are the signs of an earthquake soon?

Short answer is no. Earthquakes often occur in clusters but the problem is there is no way of knowing when the largest quake has occurred until the series of quakes is completed. Studies in fault areas measuring changes in magnetic fields, changes in the local water table, radon gas and radio wave emissions have shown to not be reliable indicators of an impending earthquake.

The United States Geological Survey (USGS) has a publication discussing the possibility that animals feel earthquakes before people. The basic premise is that animals can feel the P waves, the fastest waves coming from an earthquake, that few humans can feel. However, a baseline behavior for each animal would need to be measured and the stimuli that an animal would react to would have to be present before the earthquake. So again, animals are not a reliable precursor to an earthquake.

Given no reliable indicator of an impending earthquake, the most important development in saving lives is the use of early warning systems. There are several countries that have been implementing these for years including Japan, Mexico, and China. Many seismologists believe that a warning of up to a minute could be given. Three of the many factors that determine the effectiveness of an early warning are:

This graph presents estimated warning times from distance of epicenter. 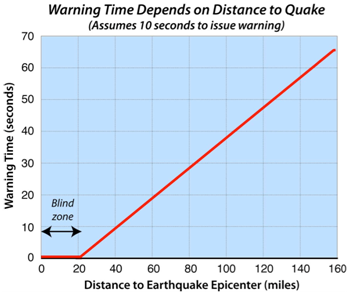 Estimated warning times for locations at different distances from the earthquake epicenter. Locations within 20 miles of the fault will likely not receive any warning as, on average, it will take 10 seconds to detect and locate the earthquake.