Oldest to Newest Bedrock in the USA "road trip"

I've tried a few things (USGS, Macrostrat, OneGeology) to help me but I am really lost, can anyone recommend a possible highway route or areas to focus on?

If you were hoping for a smooth succession from Archean all the way down to Quaternary, you're going to be disappointed. Geology is messier than rocks being serenely laid down continuously through time like that. A drive from the Appalachians to the East Coast would get you everything but the Archaean rocks, although the only Proterozoic rocks would be found in the Piedmont.

The tough part is finding rocks of Archaen age. Although the North American craton contains Archaen rocks, they are only at the surface in northern Wisconsin and Minnesota (That is, if we restrict ourselves to the United States as you asked), and the Upper Peninsula of Michigan. There are a few outcrops in the Black Hills of South Dakota.

Here's a link to a large detailed geological map of the three states.

But this is just the bedrock geology. The trouble with looking for Archean age rocks in northern Wisconsin and Minnesota, of course, is that these areas are mostly covered by glacial till from recent ice ages (although you might find an Archean glacial erratic that the ice sheets carried down from Canada). Archean outcrops might be small and inaccessible. 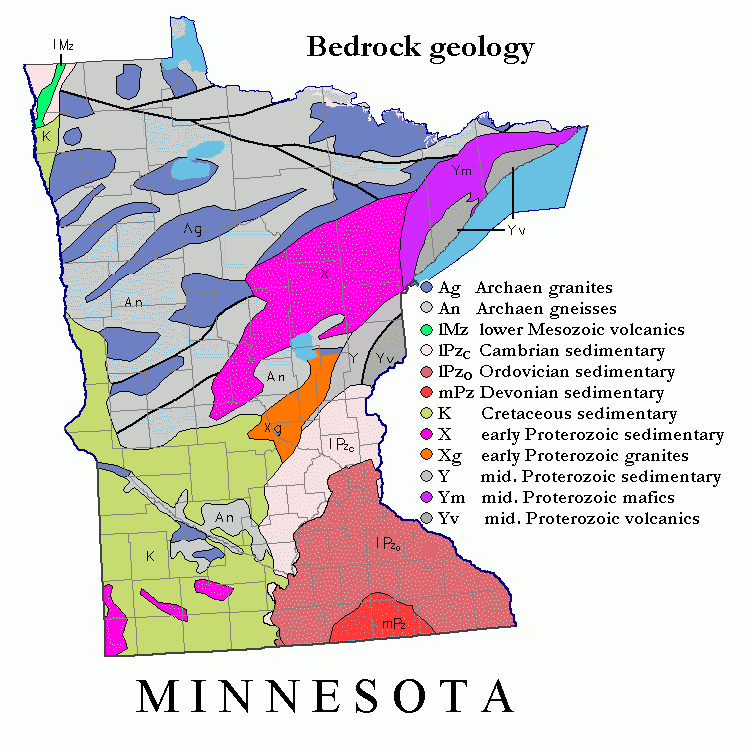 Minnesota has early Archaen ("Superior" craton) rocks and a whole succession of Paleozoic. It has some Cretaceous rocks but lacks other Mesozoic/Cenozoic bedrock. North Dakota has some Jurassic age rocks in its northeastern corner.

Wisconsin has late Archaen ("Penokean" craton) rocks and the same lack of later rocks as Minnesota. Wisconsin has a field-trip planning site with an interactive outcrop map at this link.

If you could get access to the Black Hills outcrops (uplifted bits of the "Wyoming" craton), you might be able to approximate what tou want with a trip east through South Dakota, starting in the Black Hills. I haven't found an image of South Dakota geology appropriate for embedding, but Here is a link to a large, detailed PDF of South Dakota geology, and here is another link to an interactive site with generalized SD geology.

2
What US State has the most complete rock record?

9
Horizon letter for bedrock
13
Is there a piece of upside down foreign crust in the USA?
11
What is the oldest sediment?
4
Does the existence of limestone nodules in a clay soil horizon indicate a limestone bedrock?
1
Geology: What's make a group of bedrock a formation?
3
is there any technique developed that can estimate depth of bedrock?
3
Where are the oldest igneous rocks found?
5
Making a local geological field trip an interesting and educational event for children?
5
What caused those colorations in bedrock?
4
Why is the bedrock buried so deeply in much of northern Minnesota?