In the United States the National Weather Service (NWS) Storm Prediction Center (SPC) now has 5 categories for the threat of severe storms. These five categories replaced the previous three categories of slight, moderate, and high risk in October 2014. 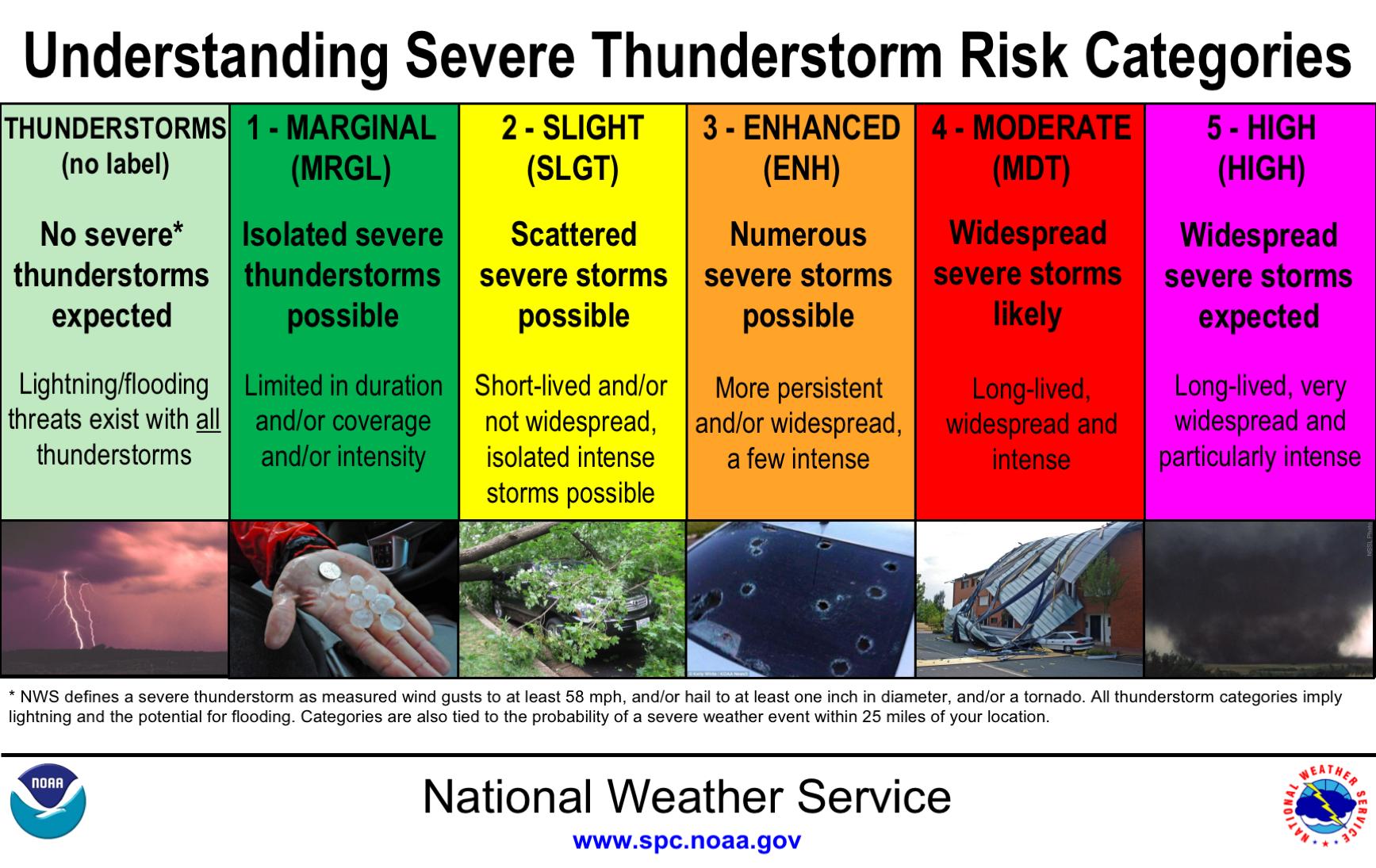 The first time I heard our local station talking about slight, marginal, and enhanced risk I had no idea which was worse- nor did anybody else around me at the time. After doing some research I understand the differences but still don't necessarily remember which is worse, whereas the previous slight, moderate, and high risk categories were pretty much self explanatory.

What additional meteorological information is presented in the additional categories that may affect how the general public reacts to the threat? I'm also wondering how these categories compare to the information given in other countries?

The SPC's changeover announcement webpage offers very useful information on the change, and is central to this answer...

Correction:
There were actually 4 categories prior to the change. The SPC used the "See Text" area for what is now designated as a "Marginal Risk". These did not have colors or outlines, but instead just the words "See Text" on the map.

Note that the "See Text" area actually did have a "hidden" outline, in the tornado\hail\wind risk percentage contours that went in hand with them, as in:

For the shift from "See Text" to "Marginal", SPC indicated that the trouble was the lack of a precise areal outline. There were also concerns that the "See Text" area could be overlooked or confusing to the public.

For the implementation of the "Enhanced" designation, SPC asserts that the "Slight Risk" covered too large a range of potential weather. It definitely is true that "Slight" was by far the most used forecast. I chose a random month prior to the changeover - July 2014... there were 23 days topping at slight risk, 3 days of moderate risks, and 5 see text days.

There were also slight realignment by weather type, and downward shifts in a couple spots. The overall changes are summarized in this table of risk criteria:

Other Countries:
It's important to note that the US is on the forefront of focus on severe weather and especially tornado forecasting. Many parts of the world have minimal forecasts. One key cause of this is that the US averages over 1,000 tornadoes per year, while Canada only about 100, all of Europe about 300, and most of the rest of the world even less (see Wikipedia or this article from ustornadoes.com).

The UK looks like it uses a three color scale of yellow, amber (orange), and red for notices on all weather hazards, which is a combination of how likely the event is with impact table levels of very low, low, medium, and high for how destructive it will be. It appears that they only issue warnings for thunderstorms, hail, and wind, not for tornadoes directly. A more straightforward scale... though some concern that the words very low and low suggest a lack of danger... I believe the US avoids these terms for this reason, and instead strays into the words you find more confusing.

Canada appears to only have watches and warnings similar to the basic US versions.

South Africa seems to have a yellow, orange, red scale which is a mix time and intensity. Yellow can be either up to 5 days in advance, or a lesser weather event in the short term.

A quick look around the met office pages for Australia, France, Argentina, Italy, and Bangladesh show no evidence of clearly defined outlook scales beyond equivalents of watches/warnings.

My familiarity with such sites is incomplete, but the fact that tornado warnings in Australia seem to be a rather notable curiosity, and that the Bangladesh main met office page has a counter suggesting only 160,000 visits highlights that the US may well be in a very unique situation in terms of regular supercellular weather and heightened attention to its threats. And so detailed scales for such weather may be without comparison. However, though many other nations certainly have threats to cause great consideration, be it blizzards, tropical cyclones, or sand storms... there doesn't appear to be widespread usage of scales with as many levels as the SPC convective outlook.

I believe you're right to question it...

A small study in the dissertation entitled Communicating Natural Hazard Risk: Warnings, Decisions, and Precautionary Behavior by Robert Drost (which likely overlaps the subsequent journal article Severe Weather Warning Communication: Factors Impacting Audience Attention and Retention of Information during Tornado Warnings, which is still unavailable except to subscribers, so I have not read)... found that 37% of the participants were unable to distinguish between a watch and a warning. (Given that the study is of young college students, this probably greatly underestimates overall misunderstanding in the public... though the use of such a small selective sample means the value could be quite inaccurate in any direction). If we're struggling with fundamental terminology important to direct life-or-death decisions, changes like these do seem hindering to the public. I spend a lot time on Facebook tv station livestreams during severe weather, meeting and talking through questions with the public... and in my experience you're right that more people are struggling with the new categories.

There is one perspective that may help offer some understanding and even support the SPC changes; there has always been a loose pattern suggesting that the SPC and other NWS specialized offices aim slightly more at meteorologists and emergency managers than the general public. This is reflected in the extensive usage of complex terminology throughout the site, the conspicuous citation of journal articles, the presentation of statistics and percentages that really wouldn't have much grounding to the general public, and the rather unadorned pages and overloaded navigation menus that all make it very hard for people unfamiliar with the sites to know where to find what they need. The new categorization may be quite confusing to the general public, but for an active meteorologist, they were quickly adapted to.

However, the SPC and its brethren at the same time puts a great deal of emphasis on mediums like Twitter and Facebook and does television interviews in key weather events. So it could reasonably argue that in reality, they are also trying to be public-facing entities. And in the end they wind up having multiple competing personalities/goals (perhaps true of all of the NWS?)

In the end, the goal of course goes back to prewarning the public. The SPC may wish the broadcast media can consolidate the messages they put out, perhaps down to just a simpler "there is a chance of tornadoes today". But the reality is that people clamor for exact values and maps, even at times when they aren't that useful. And so it typically ends up that the outlook map does make it on to the public (or, more troubling yet, presenters create their own competing scales). And so we wind up back at the issue that the scale probably confuses the public.

We all know that at some point, information overload is a problem. And that too many terms will confuse people.

So indeed it may well be after all that the relatively minor severe weather events don't need an outline and term to show it as less than "Slight", but rather just a little hint on the image like "See Text" offered.
And whether or not "Enhanced" helps better warn than confuse people is a very legitimate question.

In the end, the SPC page did note that "the NWS has a strong commitment to engaging the social sciences in evolving our services, and this community has helped inform our decision making for this change." That's where we must look to. No studies were published on this change that I know of. But we have to hope they'll continue to look into it. Social science is definitely still rather nascent and under-explored in meteorology. Here's to hoping that greater attention and resources can be dedicated to weighing terms and categories like these. You've raised a good, helpful point... and one that hopefully filters back to the people making these decisions, encouraging some more firm answers and data. It's something we definitely need to be thinking about more!

10
How could humans alter storm intensity or direction other than cloud seeding?
18
What is the status of meteorological data exchange standards?
6
What type of storm cloud is this?
11
What causes the 'calm before the storm'?
8
Are the storm cones introduced by Robert Fitzroy still in use?
6
Is it typically colder after a storm?
4
What was the storm surge height from Hurricane Harvey?