What is the intuition behind acoustic impedance? Yes, I know that it is the opposition to a seismic wave travelling in the medium. But why it is defined as density × velocity?

The velocity of a seismic wave depends on density, so why not use only the velocity contrast or density contrast between layers instead of the impedance contrast?

We use $\rho V_\mathrm{P}$ because it agrees with experiment.

You point out that density and velocity are correlated and ask, "why not use only velocity contrast or density contrast?" instead of their product.

In truth, P-wave velocity $V_\mathrm{P}$ velocity is not necessarily that well correlated with density $\rho$. Look at this plot of density vs $V_\mathrm{P}$ for rocks in a North Sea oil field from Avseth et al. (2001): 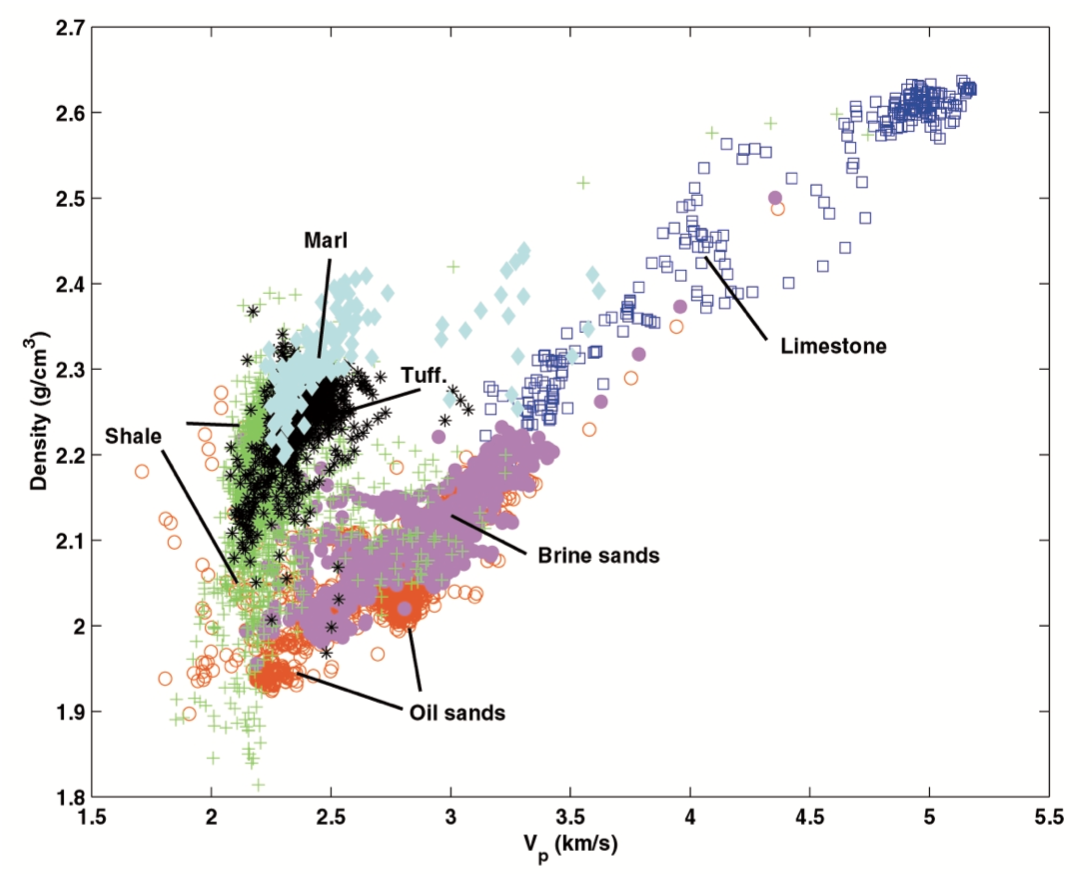 Clearly, some of those rocks have almost no contrast on one axis, and can only be separated on the other. Indeed, this sums up the great problem of seismic inversion — we would like to recover these quantities individually, but all we can usually get at is impedance.

Another example of the non-correlation of velocity and density is the so-called "fizz effect": introducing a very small amount of gas in the pore-water, less than 5%, can reduce the P-wave velocity by as much as 20%, while having almost no effect on the density. The result: a substantial change in impedance (e.g. Han & Batzle 2002).

The other thing about the product $\rho V_\mathrm{P}$ is that the impedance contrast at an interface gives us — quantitatively — the reflection coefficient $R$ at that interface (assuming vertical incidence; it's more complicated for other angles):

where $Z_2$ and $Z_1$ are the acoustic impedances of the lower and upper layers respectively.

So I guess I don't have a very good answer for that part of your question.

This concept actually comes from the electrical. They define the impedance as $Z=\frac{V}{I}$. Where V is potential difference/ voltage and I is current.

In acoustics, a similar expression can be obtained using the plane wave equation. Since,
$$\partial_t V = -\rho^{-1}\partial_xP$$ where $P$ is pressure and $V$ is velocity. Now take fourier transform of both sides and defined impedance as $$Z(\omega)= \frac{P(\omega)}{V(\omega)} = \rho c$$ Where, obviously, $P$ is analougous to potential difference and $V$ is analougous to current.

You may refer to any wave theory book for details.

Not the answer you're looking for? Browse other questions tagged geology geophysics seismology or ask your own question.

22
Placement of crustal thickness estimation from 1D inversion of surface wave dispersion curves
19
What are the physical upper bounds on the magnitude of an earthquake?
10
What are the challenges in predicting lithology directly from acoustic impedance?
3
Detecting seismic waves using Software Defined Radio
6
How does moveout correction work in seismic reflection profiling?
7
Analytical solution for seismic wavefield in MATLAB
7
How is geological time divided into units?
5
Using acoustics to measure the composition, density, and hardness of layers
2
Travel Times for Seismic Wave Types - Why reflected t-x plot curves
6
How does multiple layer seismic reflection work? How do we distinguish arrivals from different layers and their velocities?