What causes "hydrocarbons" to take the form of petroleum versus natural gas?

"Hydrocarbons" are found in geological formations consisting of strata or layers of rocks. Specifically, they are formed from decomposed organic material (that contains carbon), that bonds with hydrogen, which is a component of water. (Somehow, the resulting oxygen is released).

Such hydrocarbons can take the form of either liquids (e.g. petroleum) or gas (natural gas). There are also "intermediate" products such as propane or butane that can easily take either liquid or gas form (at differing temperatures, but at temperature ranges that are normal for human existence).

What further factors cause hydrocarbons to take the form of petroleum, natural gas, or one of the others?

geology fossil-fuel
Share
Improve this question
edited May 7 '20 at 12:36

Oil and gas both form when organic matter is buried under anoxic conditions, such that it isn't oxidised and subsequently mineralised to the elemental components of the hydrocarbons.

What hydrocarbons are formed depends on both burial depth and temperature. Above approximately 1km below the surface no significant formation of oil takes place, and hydrocarbons are either mineralised or broken down to volatile products such as methane, propane, and butane.

The often so called 'oil window' is located below 1km, but above ~4km, and at temperatures between 40-50 °C and 150 °C. Under these conditions long hydrocarbon chains can form without being broken down to shorter, more volatile chains.

At larger depths or higher temperatures no (significant amount of) oil is formed, and all organic matter is transformed to natural gas. 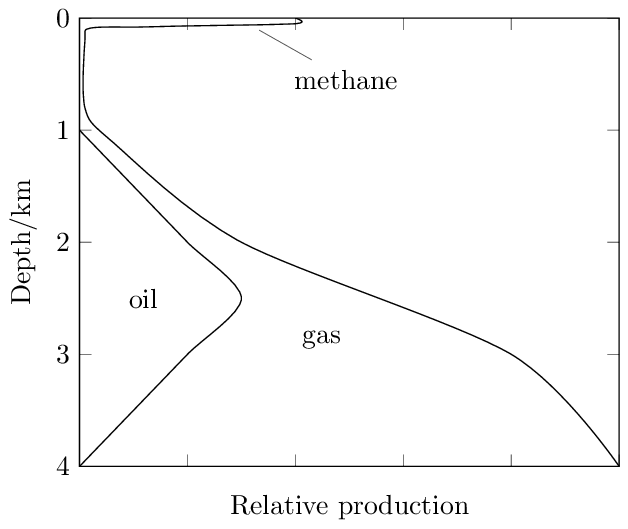 An approximate graph after Nichols (2009).

Formation of these fossil fuels often takes place in shales (lithified clay) that are rich in organic matter, but as all sedimentary rocks this is a porous medium and thus liquids will tend to flow upwards to areas of lower pressure. To be preserved two other components are therefore necessary: a reservoir rock (often sandstone) and a sealing rock (numerous types of rock are suitable, including rock salt and certain igneous rocks), often in dome or fault structures.

Not the answer you're looking for? Browse other questions tagged geology fossil-fuel or ask your own question.

20
What causes intra-plate faults, such as the New Madrid fault?
14
What are the causes of the supercontinent cycle?
3
What causes this white coloration of the ground in Gilf-Kebir?
6
Are there gases from the Earth useful to generate electricity besides "natural gas"?
0
Are fossil fuels really formed from fossils?
9
What is the most important source of natural gas? Coal, oil or other?
2
What methods do geologists employ to detemine the age of a petroleum deposit?