Can I use radar data to estimate snowfall, or is there a better way?

The problem: There are lots of websites that provide snow forecasts for various ski resorts. The area of interest to me is Japan, specifically the Nagano area, where I use snow-forecast.com and www.windyty.com to get fairly accurate snow forecasts at elevation for the resorts I'm interested in, and in the case of Windy, also for other mountain peaks outside of the ski resorts.

However, unsurprisingly, often in the morning it turns out that the forecasts are not always perfect. In fact, they can often be way off. Sometimes a big storm never materializes, and sometimes it affects only certain areas.

The Japanese Meteorological Agency (JMA) has public hourly weather station data, but the weather stations tend to be down in towns, rather than on mountain peaks, and are not necessarily near the ski resorts in question.

My solution at the moment is to frequently check the radar during storms, watching hour by hour to see which areas are being affected by the storm, correlate it with the weather station data, and try to make a prediction about which resorts are getting the most snow. Needless to say, this is fairly time consuming and often misses some things (if the storm is a surprise, if there is a big storm somewhere that I'm not checking).

My proposed solution: Write a script to screen scrape the radar images from the JMA and watch the pixel values of the areas in question, considering the pixel values to be a function of mm precip/hour, and taking the integral of the pixel function over time to get a rough estimate of total mm precip over the past 24 hours. I can probably then use other data at the weather stations to fit a function to calculate estimated snowfall from mm precip, elevation, and temperature. It obviously will be pretty inaccurate, but at least it should be able to tell me with a decent degree of certainty whether there is no snow, a little bit, a lot, or tons, which is the only degree of accuracy I need.

Questions about my proposal:

Full disclosure: Being in Florida, I don't spend as much time watching winter weather, and don't have great experience correlating radar precipitation totals to actual snowfall. Is it spring yet?

But I do at least some background and information, and so hopefully can add some insight.

Using radar is certain to have imperfections...

The exact radar setup is very important in determining the utility of the data. In addition to the range and terrain issues, the beam angle and width alter what returns mean, some frequencies attenuate or reflect certain drop/flake sizes better than others, etc... so exact radar details are very crucial.

I was able to dig up this site that shows the range outlines of nine Japanese radars and then the full JMA radar specs page. Looks like probably the radar spacing is pretty quality generally, but the frequencies are quite different than the radars I'm used to. In the end, understanding the nuances and return characteristics of a radar's setup can be a very intensive life-long process for even the best of meteorologist!

Now that doesn't mean working from radar isn't helpful. The "precipitation nowcasts" are probably better for you, taking out the complexity of all that Z-R relationship stuff just mentioned to just give you a mm/hr (though the site may well not be taking enough into account to give worthwhile values in all situations). But you can have some comfort from the fact that in the US we do regularly use basically the same idea to what you're doing to identify floods and even roughly track snowfall areas. But unfortunately it's a real pity it doesn't seem most countries like Japan offer as many detailed radar products for free as we get. In the US, the NWS gives us storm-total precipitation plots directly, which provides us the total return accumulation (since last reset) so we don't have to track the aggregation ourselves. Plus we have direct access to the full radar data files, which would remove the overcome the value stratification issues from the imagery and simplify the process. But unfortunately I couldn't find anything about any rawer data files in my searching other than for the US site in Okinawa.

Your method does sounds fairly decent, particularly for Nagano since it appears to have it's own radar (based upon that earlier list). I do imagine it'll still have some errors at times, being off by a fairly decent percentage sometimes. Even here in the US, we're only just starting to cautiously venture more into more high resolution official snow analyses. So it won't be nearly perfect, but it'll probably have some reasonable utility, and perhaps is your best method on this avenue.

However, I want to give you a couple more options that may well end up being better for you, depending upon your interest:

Initial model plots:
Global models, like the American GFS, use large amounts of data to create their initial conditions. And so among their products, they offer current snow cover plots. Pivotal Weather offers a useful tool to mouseover and get values at any point in a plot like this one: 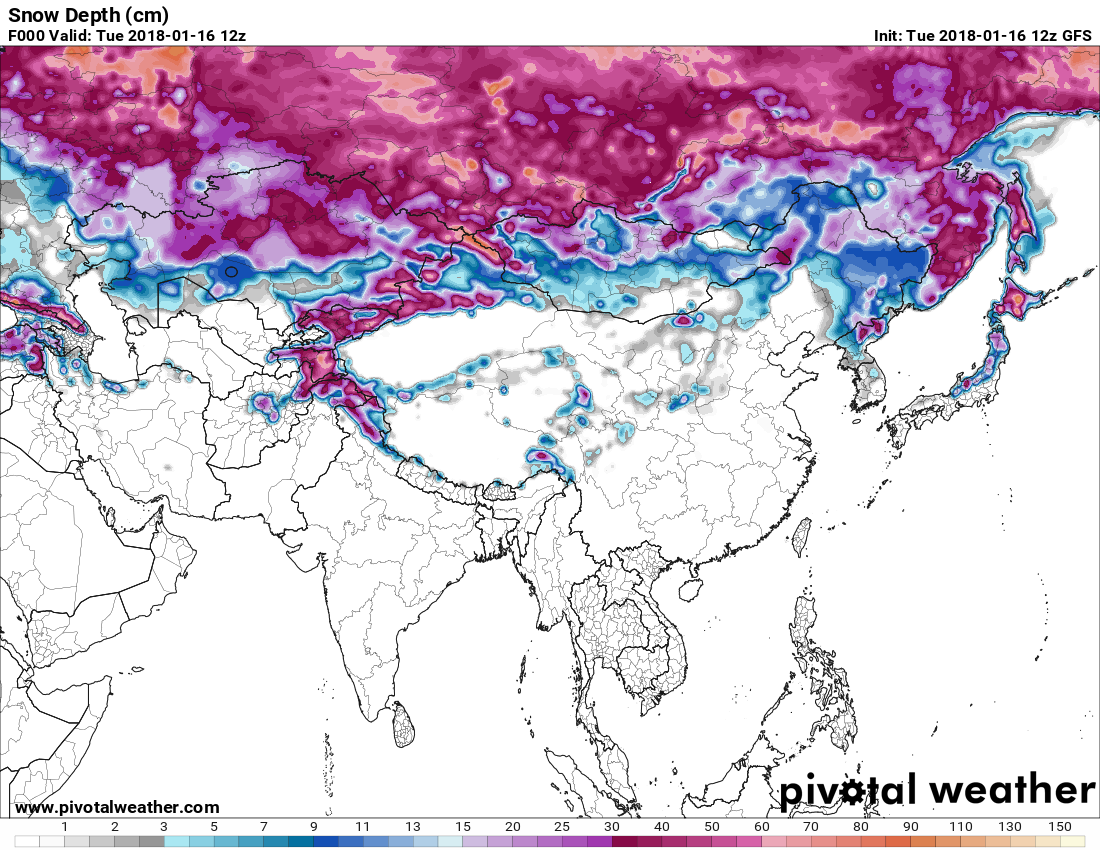 Don't know if it's perfect for you, as the GFS resolution is around 30 km, so even at maximum resolution it's going to lump some mountains and lower areas together. A pity Pivotal Weather also is a little zoomed out in your area. If you were really wanting to go all in, you could definitely dig up the data files to download the data directly out of the model for peak resolution and information. Otherwise if content, you can just check each day (or every 6 hours) and compare to the previous image (which you can pull up in the dropdown on Pivotal's site).

Satellite data:
I was able to come across one satellite that does offer a snow analysis product, the NASA TERRA/MODIS pair. On that same page they have a further link to download the data at 0.05 degree resolution, which would be less than 1 km!!! I have no idea how good these plots are, but the potential sounds great.

So just maybe model and satellite can offer to bypass some of the flaws of radar data (though just may add their own challenges). All of it is likely better than relying on the town's reporting station... it's unfortunate there's a lack of reliable reporting stations on mountains (but it's a problem we have here too, and a matter of simple economics/utility). But hopefully those help you better get the data you wish for! Happy skiing :-p

Not the answer you're looking for? Browse other questions tagged meteorology snow radar or ask your own question.

12
How can you explain this storm phenomenon?
5
What is "focus point" in WRF-plots grid box? (python code)
6
Where can I get historic hourly precipitation data for Italy?
3
How do weather services measure wind
6
Is there a way to calculate the ground and 10m temperature from standard 2m temperature measurements?
20
How to interpolate scattered data to a regular grid in Python?
5
Is there a minimum snow depth to be considered as presence of snow?
1
How to figure the MODIS snow cover against different elevation zones?