Is there any correlation between Grand Solar Minimums (GSM) and earthquakes? [closed]

I've found many claims arguing that the periods of minimum solar activity are associated with increases earthquakes and volcanic activities.

Some of these claims are supported by articles in scientific format. However, they are not published in mainstream scientific journals (as the ones listed by SCOPUS), but they seem to show some compelling evidence of the correlation between GSM and earthqueakes. Some of such articles are:

They put special emphasis in the association of GSM's with the activity of the New Madrid Fault.

However, in the mainstream scientific literature this correlations seem to be ignored. Then I wonder:

Is there any real correlation between Grand Solar Minimums and earthquakes?

If there is: How can solar activity affect earthquakes and volcanic activity?

The main proxy that we have of past solar intensity comes from its proven correlation to the number of sunspots, which have been recorded since the invention of the telescope in the early 1600's. And the plot looks like this: 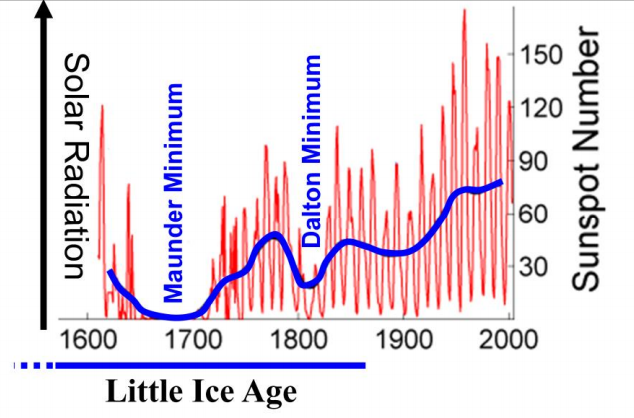 We have no evidence of any significant correlation between the solar cycle and earthquakes or volcanic activity.

You won't find papers in legitimate peer-reviewed journals regarding the lack of correlation, because generally null results are not of much interest. Therefore, I dug up the data myself: Here I've plotted the year count of all of the earthquakes worldwide from 1950 to 2017 of magnitude 7 or greater found in the USGS Earthqueake Catalog (orange), along with the total number of sunspots per year from the Sunspot Index and Long-term Solar Observations (blue): 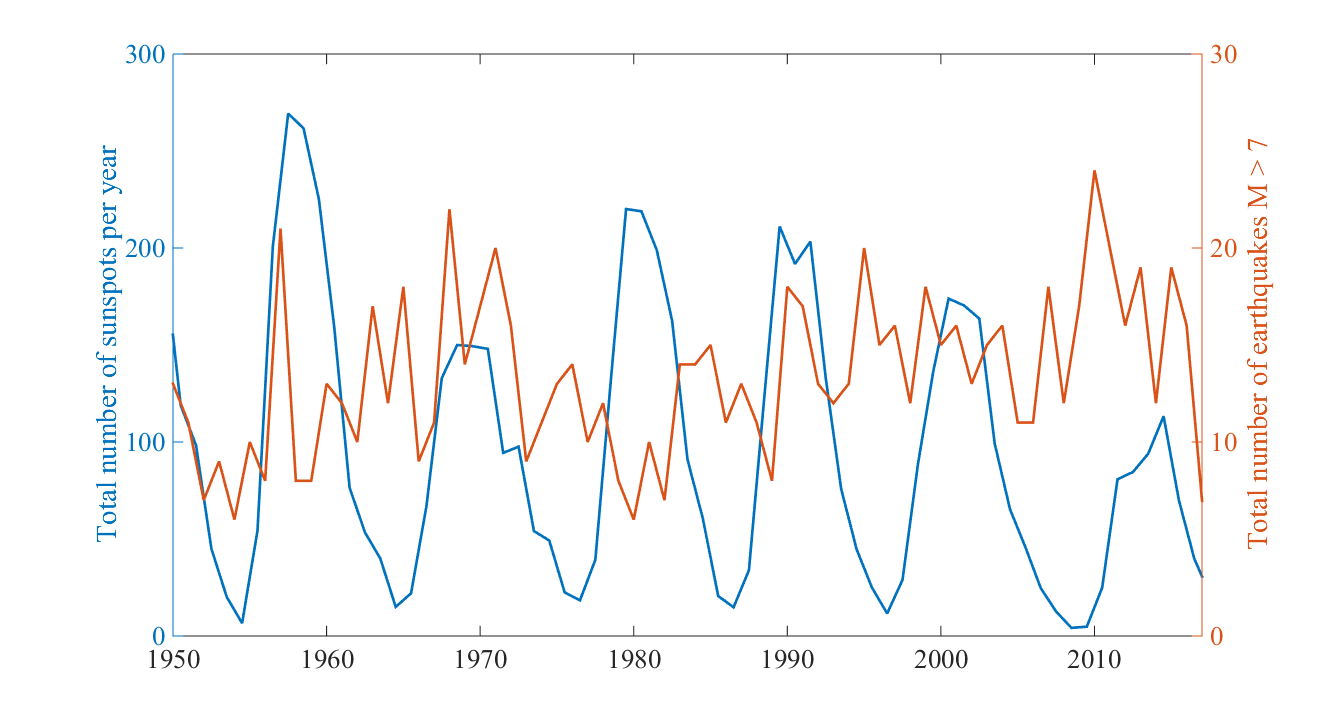 There doesn't appear to be any significant connection between the two graphs. The solar portion shows the well-proven 11 year solar cycle (actually it's a 22 year cycle with two similar halves). And the earthquakes doesn't show any clear pattern.

There are many fault systems on earth, and if you cherry-pick one (like the New Madrid fault), you might found a correlation just by chance, but such correlation have no statistical value. To believe such correlation is even more difficult if there is no physical mechanism proposed for such influence. Nevertheless, as you can see in the graph above, if we include all earthquakes the correlation just doesn't exists.

Even for the New Madrid fault the correlation is weak. Sure, there was an earthquake in 1699 coinciding with the Maunder minimum, one in 1812 coinciding with the Dalton minimum, and a smaller one in 1895 coinciding with a minor minimum. But what about the one in 1843? That one doesn't match any minimum (let aside several magnitude 5 earthquakes that were recorded during the 20th century grand solar maximum). Also, solar activity is now as low as for the 1895 earthquake and nothing have happened yet. So you have four points, three of them match your supposed correlation and one doesn't. Such data is far from providing a robust statistical correlation.

After the OP's comments complaining that the above graph, that extends back to 1950 only, is too short to capture the grand solar minimums, I consulted other, arguably impartial database of historical earthquakes beyond the instrumental record: Wikipedia. In particular, its list of historical earthquakes (before year 1900). I've downloaded the data and created a histogram of earthquakes per decade. Which is presented below together with the most popular reconstruction of solar activity, that is derived from $^{14}$C in tree rings (figure source) 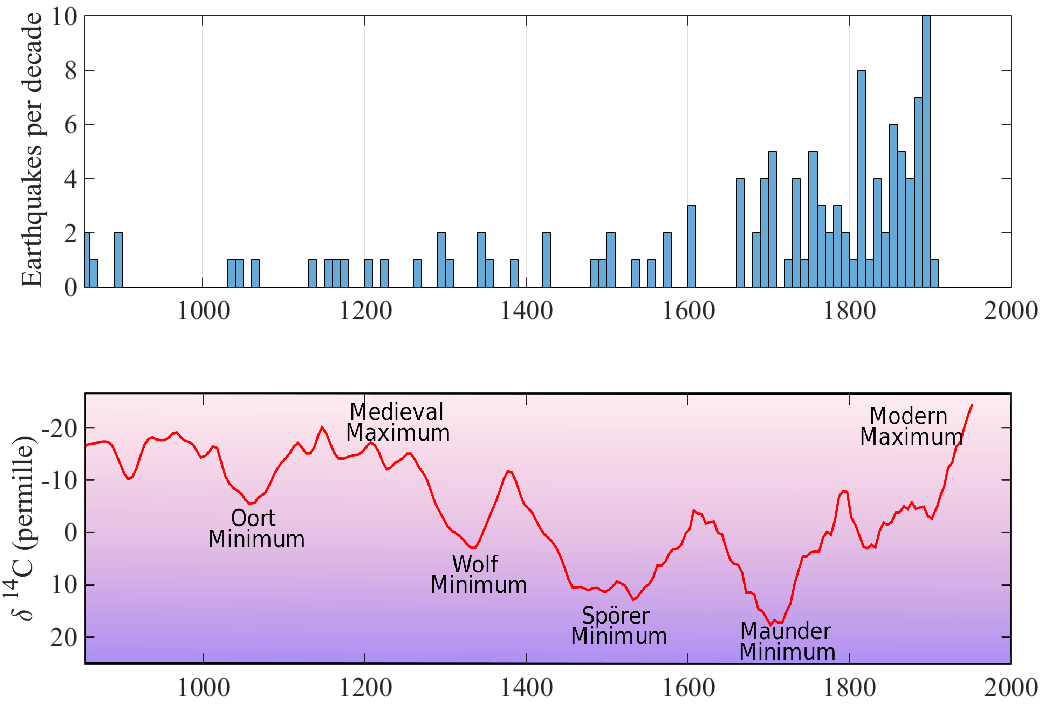 The solar cycle does indeed have some influence on climate - by changing the intensity of UV radiation, which in turn changes the properties of the upper atmosphere. However, the variation in total energy due to the solar cycles are actually very small (~0.1%). The impacts of those small fluctuations are not large enough to explain the warming observed in the last century, and it does not drive ice ages either (that are triggered by larger factors like changes in the earth orbit, which operate at a MUCH longer timescale [~100,000 years]).

The exact cycle of earthquakes can vary by hundreds of years, and there is still NO way to predict WHEN they will exactly happen with current technology. When enough people make enough predictions that a catastrophic event will happen, some of them will be right. Here is a small sampling of past apocalyptic forecasts. You can see that most did not come true. Because earthquakes happen periodically, some people do claim their predictions were right, but those accidental hits can be explained by pure chance.

Once again, there is no observed link between solar activity and earthquakes or volcanic activity.

A variant of the supposed correlation between solar minimums and earthquakes is one arguing that solar flares are correlated with earthquakes, something that is also false. This article explains it well. Research have pointed that there are some statistical properties that are very similar in both processes. However, there is no correlation or connection between them.

UPDATE: An updated and extended version of the plot of sunspots versus earthquakes can be found in my answer to this question.

Not the answer you're looking for? Browse other questions tagged earthquakes sun solar-terrestrial-physics seismic-hazards insolation or ask your own question.