As an example, NASA estimated the annual loss of the Greenland ice field 2002-2013 as more than 280 gigatons, and apparently increasing. Would the energy required for state transition on such a scale be a causitve factor in colder weather during a period of warming climate?

UPDATED: My wording above was too generalized and I got good answers to a question slightly different than the one I intended. Retry: According to Wikipedia, one of the vortices of the northern Polar vortex is Baffin Island, very near Greenland. The recent unusually cold weather in the eastern US has been attributed to the path of the Polar Vortex this year. My question should have been "could the energy required for state transition of the Greenland ice field contributed to the change in path of the Northern Polar Vortex this year?"

The short answer is YES, but with a very important caveat. It won't be colder than usual, but colder than it would have been if the Greenland ice sheet weren't there to absorb that heat, and by a very small amount.

This is true for the mean global temperature, but when it comes to the actual strength of one winter season in a particular location, the atmospheric patterns play a much bigger role than the melting of ice sheets.

The latent heat (i.e. Enthalpy of fusion) of water is huge. The amount of energy needed to turn 0°C ice into 0°C water is the same as the amount required to heat up 0°C water to 80°C. Therefore, ice sheets and glaciers have a buffer effect on climate, as they are able to absorb a large amounts of energy without an increase in temperature.

Figure: Temperature curve of water as heat is added to 18g of water.

Despite of that, it is still a very small amount on the overall energy budget of the Earth, let's do the math:

Which is very small, in fact about a 0.4% of the radiative forcing associated to CO2 (see figure below): 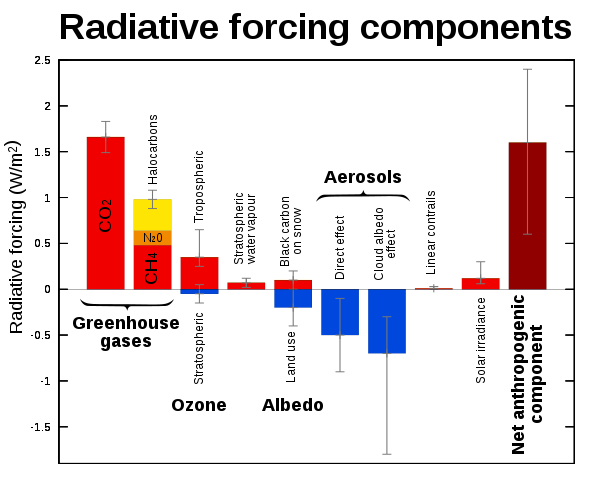 The problem is that the resulting water have a impact in sea level rise and seawater salinity, that can in turn have an effect on ocean currents, deep water formation and other phenomena that can change the heat redistribution on earth. On the other hand, the reduction of ice sheets increase the albedo (because the bare ground absorb more energy than snow or ice), so that at the end the Earth will capture more energy leading to a positive feedback. Also, as the ice sheets get thinner, they will receive less snow (and more rain), therefore enhancing further reduction of the ice mass.

Finally, I have to add that when it comes to ice sheet models and climate models, the latent heat is always taken into account and if there were no latent heat, the figure for anual ice loss would be much bigger than 280 Gt.

No, for a number of reasons.

The melting of all that ice might well have an impact on climate, but it's the influx of 280 gigatons (and rising) of fresh water every year into the northern ocean rather than a paltry absorption of 1017 joules of energy every year that will be the cause.

Not the answer you're looking for? Browse other questions tagged meteorology atmosphere climate glaciology ice-sheets or ask your own question.

6
About moving ice bergs northwards to slow down all the melting a tiny bit. ( Clearing away navigation hazards is a side effect of this.)
7
What is more important in Antarctica calving or basal melting of the ice shelves?
12
For what percentage of the earth's history has there been permanent ice?
6
Why do winter temperatures account for most of the increase in global temperature?
9
Why does winter get colder after the solstice?
3
Does the NWS actually name winter storms, or is this exclusive to the Weather Channel?
6
If ALL the ice melted, what percentage of the Earth's surface would be water?