What would it be like to live in an ice age?

If you were born in the most recent ice age, how different would your life be compared to how you live it today? Furthermore, if humans currently lived in an ice age, how would it affect life today?

It depends where, the continental landmasses at higher latitudes would be covered by massive ice sheets. Therefore the life in the sections of the US and Europe that are close to the Ice sheets would have conditions similar to what is life in Greenland today. The map would look like this: 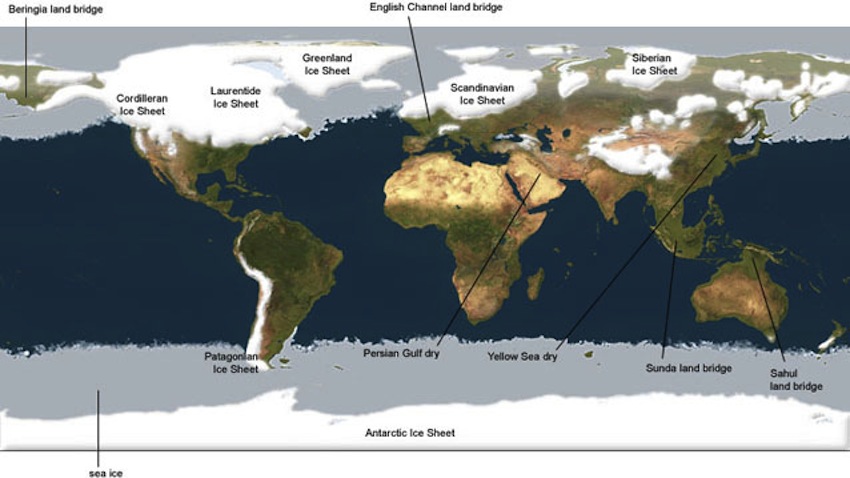 And the summers would be more mellow than what you are used to. Mean global temperatures would be much lower but at tropical latitudes there would still be warm weather. That means that the temperature gradient between the equator and the poles would be larger, leading to quicker climatic transitions as you travel North or South, and also leading to stronger winds and probably more powerful storms.

Also the sea level would be about 120 meters lower than today, exposing many areas that are now underwater, some of them massive, like the Sunda land bridge (see map in the Indonesia area), many islands would be connected to the continents, like Tasmania to Australia and Sirilanka to India. England would be connected to Europe and the Persian gulf would be dry, as well as the Yellow sea. New Zealand would be just one big island, and hundreds of islands that are now underwater would poke the oceans. Using ETOPO1 I've put together a fairly high resolution image of the world showing all the land that would be exposed if the sea level today drops 120m (as it did on the last ice age). You can see it here.

Furthermore, the Pacific and the Atlantic would be completely isolated from each other for navigation proposes, as the Magellan strait and Drake passage would be blocked by ice and the Panama canal would be a nearly impossible feat, with the sea level ~120 m lower than today. So probably, train transport would be much more important to carry goods across the Americas.

The Suez canal would not exist either, and navigation around the Good hope cape at the southern tip of Africa would be constantly threatened and perhaps blocked by icebergs, so most transport between the Indian and Atlantic ocean would be by land too.

The sea ice would be in contact with the tropical gyros, meaning that massive floating ice islands would be seen even at the Ecuador, and icebergs would be all around the oceans.

All that would mean that all the empires that rose from naval power (England, Portugal, Spain) would might not existed, then, maybe Asian powers would rule the world undisputed, and the colonization/invasion of many territories would have never happen or at least would have been delayed, leading to a completely different world distribution and organization.

Another interesting change, would be the scarcity of shallow seas compared to today. The drop in total surface area for a given elevation below current sea level becomes stepper once the sea level drops more than 60 m. Therefore, the sea depth would increase quicker as you go seaward from an "ice age seashore". This would lead also to a drop in coastal water productivity (opposite to what is believed to have happened in the Cretaceous, with high sea level and abundant shallow seas).

Also the day would be about one and a half minutes longer, meaning that the year would have only 364 days.

The change in day length would lead to calendar changes. Currently, a year have 365.2422 days, that is approximated in our calendar to 365.2425, with the fraction part divided as

That's how our calendar works today.

Now, if we assume that the figure of a day 1.5 minutes longer is precise, one year would have 364.8621 days, and the fractional part would probably be approximated to 0.8620, and perhaps divided as

Or something like that, many other arrangements could be imagined. But at the end, a typical year would still have 365 days, but the leap years would have one day less instead of one extra day.

Not the answer you're looking for? Browse other questions tagged climate-change earth-history glaciology ice-age glaciation or ask your own question.

3
What was the Earth's continent's positions 10000 years ago, or 11700 years ago, AKA when the late Pleistocene epoch was coming to an end?

25
During the "Ice Ages" or "Snowball Earth" times, where was all the energy?
10
Siberia (Beringia) during last glacier period
13
When will glaciation resume? Has global warming delayed return to global cooling?
6
How is climate change today different than the climate change that ended the ice age(s)?
4
Are we entering a new Ice Age according to Milankovitch cycles?
4
Last ice age: did glaciers move South or move downhill?
2
What did the water's edge look like on the Pacific coast of the Laurentide Ice Sheet?