Is the Mid-Atlantic Ridge a ridge or a trench?

On the other hand, Wikipedia states this:

The Mid-Atlantic Ridge includes a deep rift valley that runs along the axis of the ridge along nearly its entire length. This rift marks the actual boundary between adjacent tectonic plates, where magma from the mantle reaches the seafloor, erupting as lava and producing new crustal material for the plates.

As per Wikipedia: a rift valley is a type of trench!

Trench has a specific meaning in plate tectonics. It doesn't just refer to any valley; it specifically refers to the features formed at subduction zones by the flexure of the downgoing oceanic plate. A classic example is the Marianas Trench which is the location of the deepest point in the ocean

Fast spreading ridges do indeed have valleys at their centre but these are not usually referred to as trenches to avoid confusion. In slow spreading ridges the valley is often filled up with erupted lavas. However, the valley sits on top of a much larger ridge, which is the surface expression of hot mantle upwelling below the spreading axis. 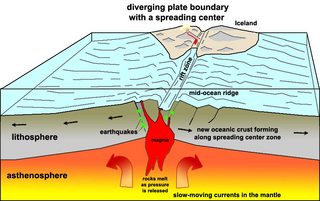 Let's clear up the terminology first:

A trench, as @bon has described in their answer, is formed where tectonic plates move towards each other and one of the plates is subducted under the other. @bon has also provided an illuminating illustration. The German term for an oceanic trench is Tiefseerinne (literally "deep sea groove").

A graben or rift valley is formed where tectonic plates move away from each other and part of the broken crust sinks. The illustration below is from Wikipedia. The German term for a graben is Graben (literally "trench").

Now that we know the terminology, we can look at the Mid-Atlantic Ridge.

The Mid-Atlantic Ridge has been created by seafloor spreading: the plates drift apart and the rift is filled with magma from below. The resulting new crust is warmer than the older material surrounding it and therefore has higher buoyancy: it floats more easily and rests higher on the magma below, forming a ridge in relation to the colder, older, more heavy material around it.

You can see this beautifully in the second illustration that @bon has provided: The crust is not thicker under the rift, rather it floats up.

So the ridge is a ridge, not a trench, but the rift valley along its length is not a trench either, but a graben: it has been formed by tectonic plates moving away from each other and parts of the separating ridge breaking off its edge and sinking into the rift.

A Graben/Rift valley is more attuned to divergent plate environment where as a Trench is mostly used and accepted when convergent plate activities is under discussion, other wise the two portray the same geological features/meaning.

The German term for a graben is Graben (literally "trench").

Not the answer you're looking for? Browse other questions tagged plate-tectonics atlantic ocean-ridge or ask your own question.

29
Why are there no hurricanes in the southern Atlantic basin?
5
What is the tectonic explanation for parallel ridges in the Arctic Ocean?
11
Why is there a bend in the Lomonosov Ridge?
5
Guinea Current existence in the Atlantic
1
Divergent boundary and trenches between oceanic plates
8
Why are tropical cyclones forming earlier in the North Atlantic basin?
5
Number of tectonic plates
9
What causes the "ripples" that extend east-west along the mid-atlantic ridge?
1
What happens when a mid-ocean ridge sub-ducts underneath continental crust?