What is the metamorphic field gradient useful for?

As I understand it, the metamorphic field gradient is the PT line traced out by the maximum temperature points of a series of PTt paths of rocks from the same metamorphic event. 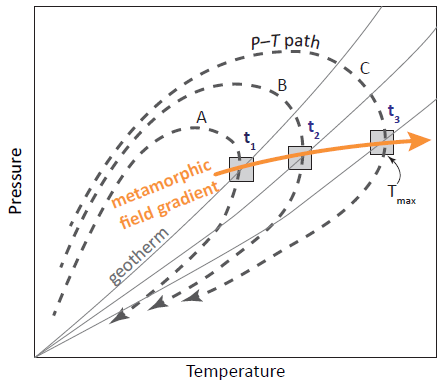 What exactly is this useful for? It seems that it doesn't really describe anything of physical significance since the $\mathrm{T_{max}}$ points can occur at different times so it doesn't represent a snapshot of the geothermal gradient at any fixed time.

You are entirely correct. Todd and Engi write:

The mineral assemblages of rocks at the surface lie on a locus of P–T-conditions… It must be stressed…does not imply a P–T-distribution or geotherm realized at any one time during the orogenic evolution of this area. Even assuming the P–T-values reflect maximum metamorphic conditions, these were established at different times in different areas…show the integrated effect of all the tectonometamorphic processes…i.e. the sum of burial, heating, tectonic and erosional unroofing and cooling.

Notwithstanding, the metamorphic field gradient is still useful, particularly when comparing different sets of rocks.

Each of the samples in your figure (A, B and C) is a single rock and looking at it tells you the history of this rock and this rock alone. When studying a large area (a "field") there will be many rocks, that may differ from each other in their individual P–T-path. For example, in a rock suite that is now dipping 90°, one might argue that walking 3 kilometres on the surface equals 1 kbar of pressure, equals about 3 kilometres of depth. Because of that, each sample along the transect will have experienced different temperatures, with ideally the deeper ones also being the hotter ones.

By choosing a convenient reference point (maximum temperature of an individual sample), and connecting all samples along a transect, you can get an estimate of a P–T gradient, which can approximate a geotherm (under many assumptions). The same Todd and Engi paper has this figure: 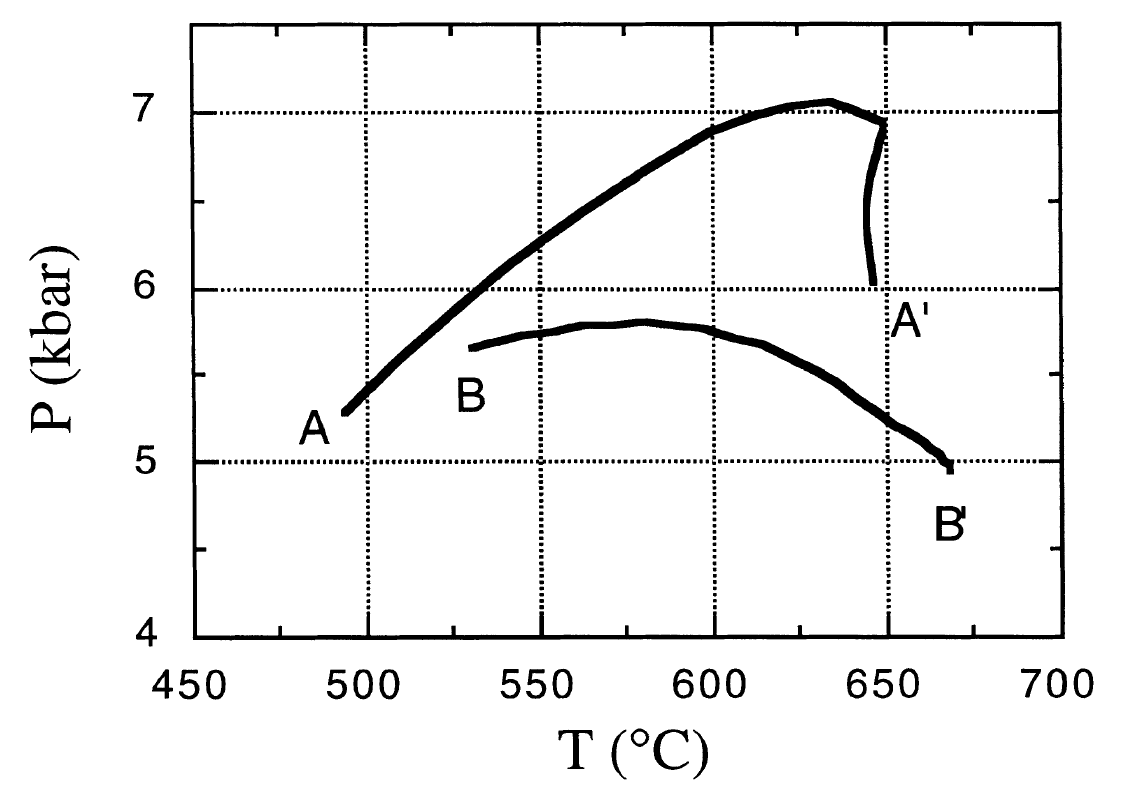 Each of the lines is based on several dozens of individual samples. Based on this representation of the data, they go on to conclude:

Reaching those conclusions is only possible when condensing the 100 or so individual samples they used (i.e. 100 individual P–T-path loops) to what turned out to be only two metamorphic field gradients.

Not the answer you're looking for? Browse other questions tagged geology tectonics metamorphism or ask your own question.

5
What is the tectonic explanation for parallel ridges in the Arctic Ocean?
9
What is the current status of geophysical global cooling theory?
5
What is the difference between nappe and thrust sheet?
5
Making a local geological field trip an interesting and educational event for children?
0
Any recommendations for a good online lecture series on Metamorphic Petrology